In recent years, the number of Chinese enterprises investing in Bahrain has risen rapidly.”

HE Anwaer, Chinese Ambassador, spoke to Liz O’Reilly ahead of Chinese National Day.

How are you liking Bahrain so far? What do you see as your main tasks while you are here?
Bahrain enjoys a reputation as the pearl of the Gulf with its excellent history, developed economy and diversified culture. I believe that with the development of bilateral friendly cooperative relations between China and Bahrain, the Belt and Road Initiative will help Bahrain to achieve economic transformation and upgrading, promote the strategy of diversification, and realise the prospect of political stability, economic prosperity, social harmony and improving people's livelihood. I am pretty happy to live and work in Bahrain and make lots of Bahraini friends.

Friendship between China and Bahrain dates back to ancient times. Since the establishment of diplomatic ties, our bilateral relations have kept favourable momentum of development. Under the guidance of the leaders of our two countries and the joint efforts of our two peoples, high-level exchanges have become more frequent, mutual trust has been constantly strengthened, economic cooperation has been greatly promoted, cultural and educational exchanges have achieved great success. China and Bahrain have become friendly partners in mutual understanding and trust, cooperative partners for a win-win result and respectful partners learning from each other for mutual benefit.

I wish to enhance the all-around exchange and cooperation, constantly solidifying the foundation of political mutual trust and enjoying the mutual benefits of cooperation achievement between China and Bahrain with the joint efforts of all the diplomats of my mission and all my Bahraini friends.

I do believe that the comprehensive cooperation between China and Bahrain offers historical opportunity, especially with the integration and implementation of the Belt and Road Initiative and Bahrain’s Economic Vision 2030. I firmly believe that our bilateral relations will have more beautiful prospects. 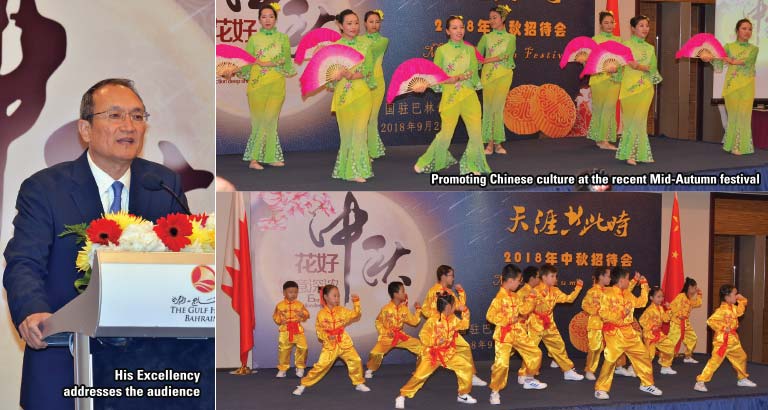 How many Chinese people are resident in Bahrain? What are their roles here?
According to the incomplete statistics, there are more than 3,000 or 4,000 Chinese nationals living and working in Bahrain. Most of them are tenants of Dragon City or staff of Huawei. They enjoy comfortable and happy lives here. I do believe that with the rapid development of the economic cooperation and personnel exchanges between China and Bahrain, the number of Chinese people in Bahrain will increase constantly.

All the Chinese nationals in Bahrain are making great efforts with the Bahraini people to promote our bilateral friendly relations and contribute to Bahrain’s development, prosperity and stability.

What are the current trade figures between China and Bahrain? Can you outline which areas you would expect growth to come in?
According to Bahrain Government statistics, trade volume in 2017 was about USD2 billion. I believe that with the integration of China’s Belt and Road Initiative and Bahrain’s Economic Outlook 2030, we will further tap cooperative potential and enhance our bilateral friendly cooperative relations to a new level.

In recent years, the number of Chinese enterprises investing in Bahrain has risen rapidly. At present, the Chinese enterprises which actively develop business in Bahrain have covered all the cooperation fields including information and communication, high-end manufacturing, environment protection and project contracting, such as Huawei Technologies, CPIC Abahsain Fiberglass, China Machinery Engineering Corporation, etc. As I know, CPIC Abahsain Fiberglass is planning to invest USD500 million to extend to four production lines. The first production line was established and put into use in 2009 and the second production line was completed in July 2017. The third and fourth line are estimated to be completed in 2020. CMEC is now negotiating with Ministry of Housing on guaranteed financing clauses for social housing project. Once the agreement is reached, the amount of investment in the first phase will be a pretty huge USD550 million.
Bahrain is making efforts to enhance its infrastructure construction, attract foreign investment and realise economic diversity. The Chinese enterprises in Bahrain have strong willingness and strength to vigorously participate in the construction, logistics, information and telecommunications and manufacturing sectors of Bahrain.

China congratulates Bahrain on the discovery the biggest oil and gas field in its history and is ready to join its exploitation and development.

You recently wrote in the GDN about the benefits of the Belt and Road Initiative, can you tell us how this will eventually affect this part of the world?

China, as the world's second largest economy, now contributes over 30 per cent to the world's economic growth. China's extensive consultation, joint contribution and shared benefits with the Belt and Road countries is conducive to creating more opportunities for mutual development.

First, in the past few years, China and the countries involved in the Belt and Road initiative have worked together to promote regional economic development and the recovery of the world economy. As you know, the impact of the global financial crisis, which broke out a decade ago, was still felt five years ago. In this economic situation, President Xi Jinping proposed the Belt and Road Initiative which has promoted economic growth and improved people's livelihoods through cooperative projects with other countries.

Second, joint contribution and shared benefits of the Belt and Road development have expanded two-way trade and investment. The two-way trade between China and the Belt and Road countries has totalled more than USD5 trillion, and this rate of growth is faster than the growth rate of trade between China and other regions. Two-way investment between both sides, based on my calculation, is nearly USD100 billion, which is also growing very quickly. Development opportunities actually lie in two-way investment, trade and personnel exchanges.

Third, joint contributions and shared benefits of the Belt and Road development have also increased complementary advantages and win-win outcomes for all parties. As you know, countries along the Belt and Road, as well as other cooperation partners, are mostly developing countries. There are, however, also developed countries, emerging economies and high-income oil-exporting nations. They all have their unique advantages, be it in capital, technology, management, labour, resources or market. Most importantly, the Belt and Road Initiative can utilise their complementaries and share opportunities for development among the countries.

China has long enjoyed a comparative advantage in traditional production and is also now creating new advantages in the areas of capital and management. Other developing countries boast huge markets, while developed countries have clear advantages in the areas of capital and technology. Through bilateral, trilateral and multilateral cooperation, the Belt and Road Initiative can combine all the advantages of countries along the Belt and Road to promote economic development and improve people's livelihoods along the route.

How could Bahrain be made more attractive to Chinese visitors?

Bahrain has a long history, splendid culture and rich tourism resources. Tourists can experience both the Arab history and culture and Islam, and the charm of the F1 Grand Prix and various international conferences and exhibitions. With a stable society and hospitable people, Bahrain is an oasis of harmonious coexistence between different religions and civilisations. The government of Bahrain is vigorously promoting tourism and attracting tourists from all over the world.

Bahrain Tourism and Exhibition Authority set up a representative office in Beijing in March this year, and actively cooperates with the Ministry of Culture and Tourism of China, major travel agencies and airlines to launch the direct flights to China by Bahrain’s Gulf Air. China and Bahrain have signed an agreement on mutual visa exemption for diplomatic and official passport holders. These measures will undoubtedly further facilitate personnel exchanges and promote tourism cooperation between our two countries.

You have mentioned in meetings with high-level officials your intention to build on Bahraini-Chinese relations, how do you propose to achieve this? Are there any cultural events planned or any high-level visits by either country?

Since I assumed my mission on April 19, 2018, I have presented my credentials to His Majesty King Hamad bin Isa Al Khalifa and a copy of my credentials to HE Shaikh Khalid bin Ahmed Al Khalifa, Minister of Foreign Affairs. I have also intensively met with more than 70 senior officials of Bahrain. During my post as Chinese Ambassador to Bahrain, I will join hands with the Bahraini government and all the friends in Bahrain to promote our bilateral friendly cooperative relations to a new level. I am full of confidence for the bright future and prospect of China-Bahrain relations.

I deeply feel that the Bahraini government and all sectors of society attach great importance to developing relations with China, and regard China as an important and reliable cooperative partner. They are urgent to strengthen bilateral exchanges at all levels, enhance the political mutual trust, expand the practical cooperation and push our friendly relations to a new level. At present, the Middle East and Gulf region are undergoing complex and profound changes. Bahrain attaches importance to China's rising international status and influence and is eager to strengthen cooperation with China on international and multilateral affairs, enhance coordination and cooperation on international and regional issues with common concerns and safeguard our common interests.

At the invitation of HE Wang Yi, State Councillor and Foreign Minister of China, HE Shaikh Khalid bin Ahmed Al Khalifa, Foreign Minister of Bahrain, participated in the eighth Ministerial Meeting of China-Arab States Cooperation Forum in Beijing in July, 2018. HE Shaikha Mai bint Mohammed Al Khalifa will also attend the Fourth Arab Festival in China in October 2018. We will continue to promote high-level bilateral visits. And the Ministry of Culture and Tourism of China is planning to send a Chinese art troupe to perform in Bahrain to celebrate the Chinese New Year.

The Belt and Road Initiative is a development strategy adopted by the Chinese government. The ‘belt’ refers to the overland interconnecting infrastructure corridors — the Silk Road Economic Belt component. The ‘road’ refers to the sea route corridors — the 21st Century Maritime Silk Road component. The initiative focuses on connectivity and cooperation between Eurasian countries, primarily, and China.