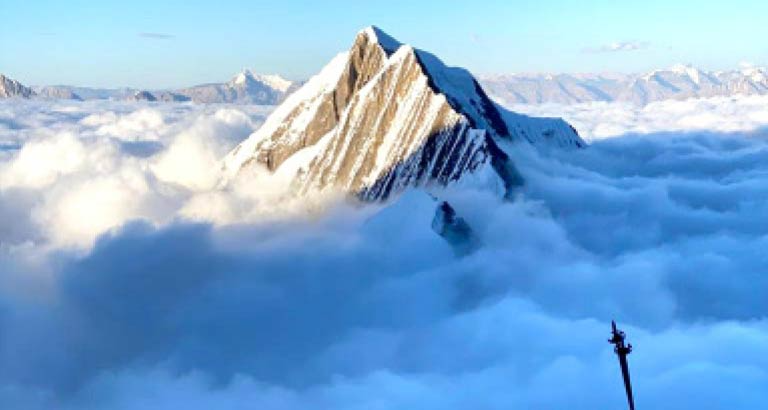 The Bahrain Royal Guard team which has been training to climb the highest mountain in the world, Mt. Everest, in 2021 have successfully completed their training in the Himalayan mountains.

The team, consisting of 18 people, were given a mission by National Security Advisor, Royal Guard Commander Major-General His Highness Shaikh Nasser bin Hamad Al Khalifa to raise the Bahrain and Royal guard flag on the summits of Mt. Lobuche (6119m high) and, once training completed, on the summit of Mt. Manaslu (8163m high) which is the 8th highest mountain in the world.

Exhibition leader, Christopher Anthony, tells Bahrain This Month’s Farah Baig about the experience and significant achievements that came with the climb including the renaming of part of the Himalayan mountain range to ‘Royal Bahrain Peaks’. 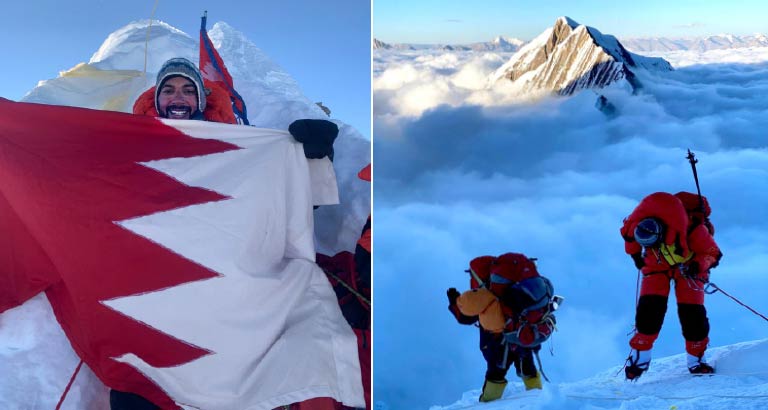 What can you tell our readers about the Bahrain Everest team’s recent feat of scaling Mt. Manaslu?
The Bahrain Everest team had 12 months of training during which we, as a novice climbing team, tried to fill ourselves full of knowledge by speaking to our guides in Nepal - Seven Summit Treks. The initial expedition was to Lobuche - one of the 6000 m training mountains in Nepal – which included a 14-day trek from Lukla all the way to Namche Bazaar, followed by the Lobuche base camp. There we prepared, trained and got used to all our equipment before summitting Lobuche, which served as the stepping stone we needed to go on to Manaslu - commonly known as ‘The Killer Mountain’ purely because it’s a dangerous mountain and a very technical climb which people take for granted since it’s lower than Everest.

What can you tell us about the team that completed the feat?
A year ago, the team consisted of 20 people but we went through vigorous medical testing to ensure we were physically fit, since some of us were slightly older, and we had to ensure everyone was physically fit for the climb. After some unfortunate injuries we had during training, the team was down to 18 people which we took forward on the two-summit attempt. 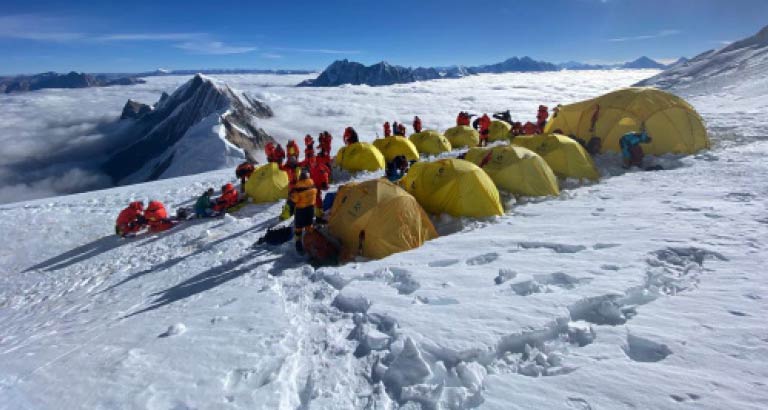 How long did the team take to prepare for the mission? What did the training consist of?
HH Shaikh Nasser had come up with the idea two years ago and we put the planning in place to search for a guide team in Nepal, eventually going with the biggest and best Nepalese-owned team – Seven Summit Treks.
The training consisted of fitness training, rope work, ab sailing - making sure that we were physically and mentally fit for the task. This was in addition to understanding high altitude medicine so we can identify frostbite and non-freezing injuries within ourselves and the team. We needed to make sure that we understood the signs and symptoms of altitude sickness among other things, so it not only involved fitness but a lot of classroom work too.

We also learned to understand the team’s strengths and weaknesses, when people are hiding injuries or suffering in silence; it was a proper team coming together.

The team spent eight days acclimatizing and climbing towards the summit. How important was this for the success of the mission?
The acclimatization of Lobuche and Manaslu is probably the most important aspect of the climbing of Mt. Everest. Every single member of the team at some point experienced altitude sickness which comes with severe migraines, loss of appetite and vomiting in some cases. We found ourselves gasping for breath because of the lack of oxygen as you start pushing past 3000 meters, especially on Manaslu as we got higher. I don’t think anyone had a good night’s sleep in those 8 days as it’s very uncomfortable. Through our training and our guides, we were able to understand that, as bad as it is, this is normal and the effect of being at this altitude.

What were the main challenges during the mission considering the environment, stamina and other factors?
The main challenges were obviously the unknown. We’d seen it, read it and explained it but when you’re actually in the middle of it is when you find that there are gaps, and being a novice team is where the experience is. That’s why we’d done Lobuche and Manaslu to prepare ourselves and iron out those things that were perhaps missing that we can now prepare for Everest. 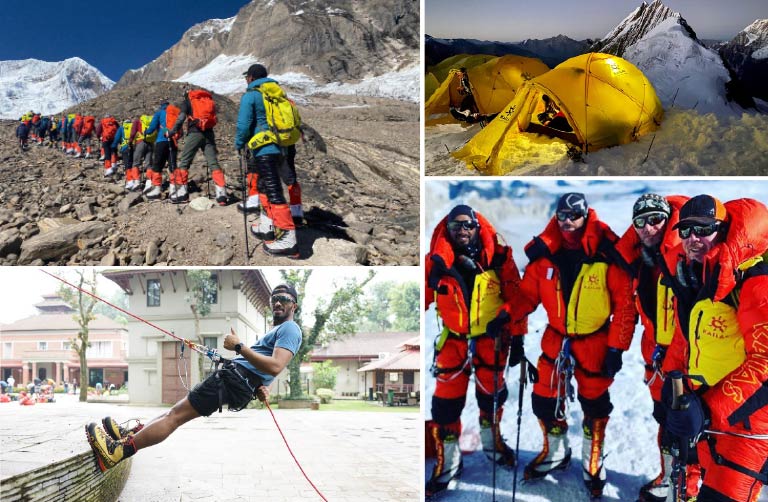 As the exhibition leader, what were your main challenges and responsibilities? How did you prepare for the summit?
Being tasked by HH Shaikh Nasser as the expedition leader was a great honour, but also a great responsibility. The Company Commander in the Royal Guard and Officer Commanding the Bahrain Everest Team, Shaikh Mohamed Hamed Mohamed Al Khalifa, was inspirational as my partner leading this expedition. While I concentrated on the planning of a liaison between Seven Summit Treks, Shaikh Mohammed concentrated on all aspects of dealing with the team and making sure we were a cohesive force between me leading it and him facilitating with the Bahrainis. It is a great team – I wouldn’t say there was one leader, but rather 18 leaders that bubbled to the surface at certain points, stepping to the forefront when one of us was tired and weak.

What are some of the most significant achievements from this summit?
The most significant achievement was threefold really - the first one was the Bahrain and Nepalese government enabling us to come and complete the mission, in the middle of a pandemic. You know it was never an easy decision by the Bahrain and Nepalese government but in hindsight it was the right decision. That, however, was the first hurdle and first significant achievement when we got the invitation from the Nepalese government. It also included some extremely hard work by the Bahrain government and Bahrain’s embassy in Delhi that were also instrumental in facilitating the mission. The second one would of course be our first summit of Lobuche - seeing the team smile after 14 hours of sweat and tears but standing on the summit and then seeing the hunger on the guys’ faces for Manaslu. Again, seeing the guys individually summiting was just an amazing achievement personally and as a team. 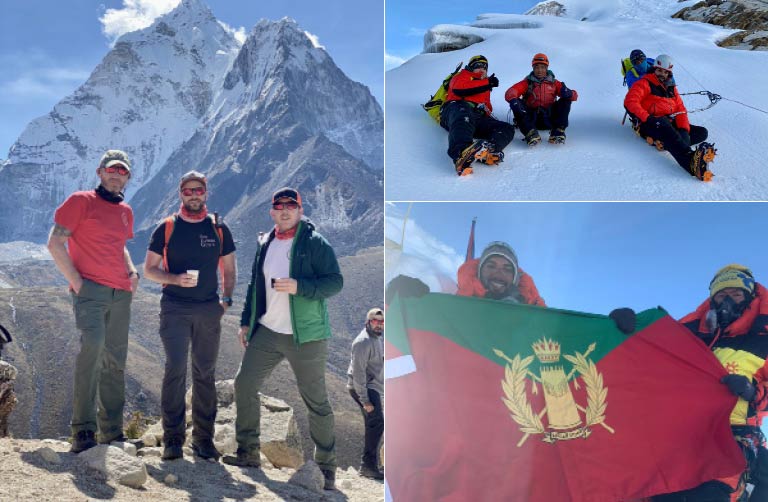 Were there any challenges presented by the current pandemic given the timing of the mission?
The ongoing pandemic honestly has its challenges. The guys were isolated for seven days as part of the entry procedure after which they had a COVID test to make sure we were all clear before we went to the villages in the Himalayas. The thing we didn’t want to do is infect anybody, so we had to make sure that the COVID protocol set by the Bahrain Defence Force and the Bahrain government was adhered to at all times. So, we all had gloves and masks on, and limited as much contact as we could.

How significant is this achievement when it comes to sporting and athletics in Bahrain?
In line with HH Shaikh Nasser’s vision for youth and sport, and for really pushing the ethos of Bahrain’s people outside of Bahrain to achieve goals, it’s very significant. HH Shaikh Nasser was getting situation reports nearly every day to ensure the team was achieving their goals. So, yes the climb was important, but it was probably 85 percent of the visit because during the visit the  team made several visits to significant locations and ministers too. HH Shaikh Nasser always stressed that the activity is just part of the mission and that the mission was for Bahrain’s people.

Will the team be attempting any other similar missions? What’s next?
Obviously, this was phase one of the mission, phase two will be the summit of Everest which should be officially announced. Hopefully the whole team will be set on the mission in five months to summit the highest mountain in the world and raise Bahrain’s flag, in line with our mission from HM King Hamad and HH Shaikh Nasser. 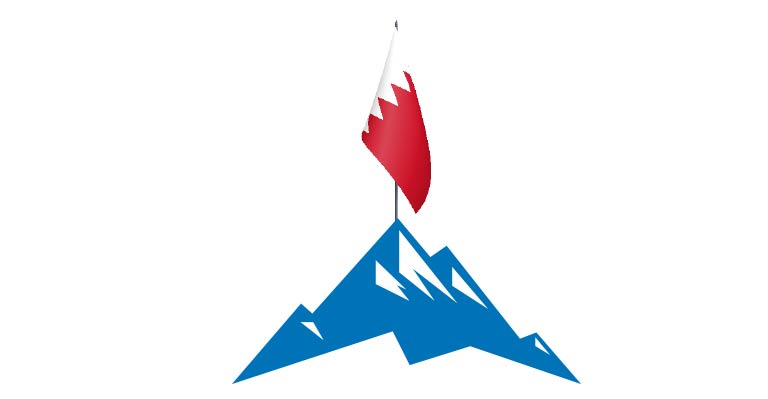