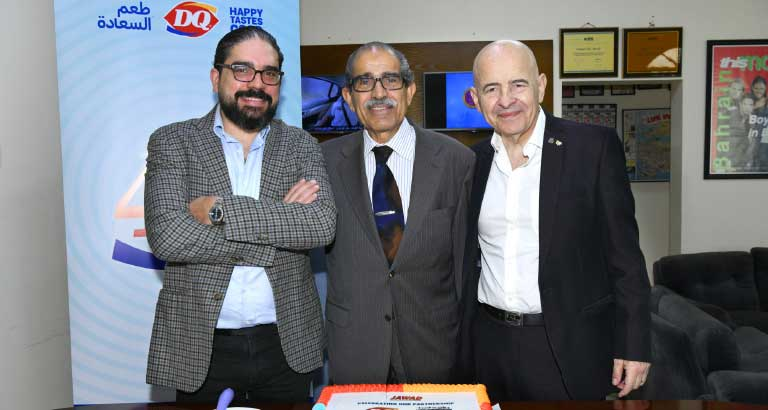 Long-term residents of the Kingdom of Bahrain experience a sense of nostalgia when dining at Dairy Queen. This year, the American fast-food restaurant is celebrating the 40th anniversary of its opening in Bahrain. We take a trip down memory lane with the Chairman of Jawad Business Group, Faisal Jawad, who tells us about his journey to opening the first Dairy Queen branch.

For those who have grown up in Bahrain, the feeling that some iconic locations are now completely unrecognisable is unshakeable. While this might ring true for some areas, the same can’t be said for the Salmaniya junction for one major reason – Dairy Queen. Whether it’s a birthday party, family dinner or a chat over an iconic Blizzard with a friend, long-term residents all have a Dairy Queen story.

The popular restaurant, iconic across multiple generations, was established in 1982 by the visionary businessman, Faisal Jawad. “Businesses have existed in various ways before me, but to be able to introduce a new concept to a community and make a difference puts a stamp on your achievements. So, bringing Dairy Queen to Bahrain all those years ago is definitely an achievement,” says Mr. Jawad.

The idea of introducing a burger franchise in Bahrain came about in 1980 when Mr. Jawad was having a discussion his mentor and two American residents. “At the time, there wasn’t a proper concept where you could go and get a burger in ten minutes flat. You could go to a restaurant and ask for one but it wouldn’t be consistent,” he explains.

Mr. Jawad saw an advert in Bahrain’s National Gazette that shortly after. “Dairy Queen was registering their trade name, and I thought they manufactured cheese. I wrote to them expressing my interest in exporting some and received a response explaining that they were not a dairy company. ‘We’re a burger and ice cream company. Thank you and good bye.’ it read,” he reminisces.

“I thought to myself ‘Why stop there?’, so I had a discussion with my colleagues who agreed that we could introduce the concept. I wrote back saying we were interested and well… the rest is history,” he says.

The first branch opened its doors in Salmaniya  as the first restaurant in Bahrain to have a drive-through. “On opening day, we did not know what to expect. There were three Americans who’d flown in from Minneapolis to help us with training, the staff and myself; we had the biggest shock. People from all around the island, including some of Bahrain’s most important people, flocked to us,” he remembers.

“Prior to opening, we’d each written our expected outcome on a piece of paper – BD 500, BD 1,000 and so on. We were all wrong. It was rewarding and a memory I will always cherish,” he adds with a smile.

Dairy Queen was opened elsewhere in the region; however, Bahrain’s Dairy Queen presence is the only one that persevered and exists to date. After reaching its historic 40-year milestone, celebrations are certainly in order. “I believe the guidelines that we followed ensured the quality and consistency of our products, and enabled us to enjoy that longevity. The continued existence of Dairy Queen certainly shows a lot of passion from us as a family. In fact, my son Kareem practically grew up with that business, and is determined to celebrate the occasion in a fitting manner even more so than me,” he says.

Dairy Queen now has nine branches in Bahrain (most recently in Hidd) and the team intends to expand further. “The team we have today is not the same as the one that we started with in 82. They have new ideas and new challenges too.” he says.

“I would like to thank the people of Bahrain for patronising Dairy Queen, everyone who has ever worked for us, and Kareem and his team for being very passionate about the brand,” he says graciously.