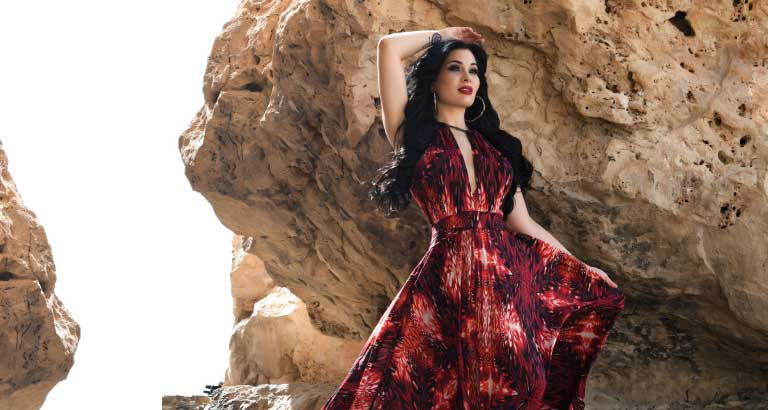 Ever since she was a little girl, Ranya Malovic. knew she had an affinity for the performing arts. Years down the line, she has grown to be one of Bahrain’s most popular performers and, more recently, an artist manager too. She speaks to Farah Baig about her love for dance, efforts to create an inclusive agency and thoughts on the Kingdom’s entertainment industry.

“I am a professional performer. My work is basically what defines me. It’s my life.” These are the words of the supremely talented Ranya M. who is known across the island for her mesmerising performances.

Since the Kingdom bounced back from the effects of the pandemic, events and entertainment have returned in all their glory. If you’ve recently been at a large-scale event, wedding or prestigious hospitality venue, chances are you’ve seen the stunning Ranya performing or managing full-scale shows with some of the artists that she manages.

“The style that I perform the most is belly dance, but I also do commercial styles including jazz which is my biggest passions, and fire shows which are a mix of dance and stunts using fire props,” she says.

“When I was just four years old, my parents had a blanket with a border of a different colour. I’d set it down on the floor and it would be my ‘stage’ while I’d dance to a whole album of ABBA. That’s the earliest memory I have of myself dancing,” she reminisces.

On noticing her love for dance, Ranya’s parents enrolled her in a classical dance preparation class, commonly known as ballet. When asked if she believes it laid a foundation for her skills she says: “I think this is a controversial topic. I don’t think it’s necessary to have a ballet education if you want to be a good hip-hop or belly dancer, but I will say that it’s always useful to cross-train. It helps with balance, turns and discipline but you don’t need to go into pointe shoes and put your body through all of it. As a classically trained dancer I will say yes.”

When the time came for Ranya to progress to pointe shoes, she opted instead to dabble in jazz, ballroom and Latin dance. “I came across belly dance by chance and wanted to try it, so I joined just for fun,” she says. “The Middle Eastern community in my country was quite small, and so they approached me to perform on special occasions since I already knew the songs. That, in a way, changed the course of things.”

Over the years, Ranya thrived and so she competed in several regional and international competitions for performance and choreography. “I would place in every one of these events, but the one I consider to be the most memorable is the WADF World Championships in 2017 as I had won three categories,” she says.

Ranya’s experience of being a performer in Bahrain has been largely positive to date. “When I first arrived in Bahrain seven years ago, I was only meant to be here for three months. There can be a lot of stigma around female performers. I’ve performed in Egypt, India, France, Netherlands, Austria, Poland and Hungary too, but I felt the most comfortable and safest here in Bahrain out of all other Middle Eastern countries. It was one of the determining factors which motivated me to stay,” she says.

“I definitely feel like in Bahrain sometimes if you create the offer, then the market comes. One of the other reasons that I love Bahrain is the fact that women are encouraged to have a professional role and not just expected to fulfil a family role.”

Ranya recently co-founded a performance arts business, Flames Dance Company, which provides entertainment for all kinds of events. “COVID was a catalyst for Flames in a way. When there were lockdowns, I had plenty of time to prepare and train my dancers for the world of art,” she says.

“The all-style company started with two dancers but has grown to have sixteen professionally-trained dancers in just under a year. We have ballerinas, gymnasts, Latin dancers, urban dancers and aerial artists.

“Partnering with the founder of Spin Tribe, Moayyed ‘Mo’ Feroze, to start Flames has been fantastic as we are both equal in every decision. I couldn’t have asked for a better business partner,” she says.

Spin Tribe now has the biggest fire formation, not only in Bahrain but the Eastern Province of KSA too, and fire shows have grown to be one of the company’s most booked acts. “We have eight fire performers who do everything from poi to fire eating,” she says.

She explained that performers are similar to high-performance athletes in the sense that it involves intensive training and lots of hard work. “I knew that once I finish performing actively, I would want to stay in the field as a choreographer so going into artist management made sense. As part of Flames, I provide a complete production which includes costumes, props, choreography and even light and sound,” she explains.

As an artist who has performed at several venues across borders, Ranya found that her experience working for various managers was also a driving factor when deciding to start her own company. “Not all of them were great so I decided that I would be the sort of manager that I wished I had. As a woman, I felt the need to create an agency which would be safe for women and as body positive as possible. We have dancers from the age of 18 through to 41 and hope to be an inclusive agency which gives everyone an opportunity to develop,” she explains. 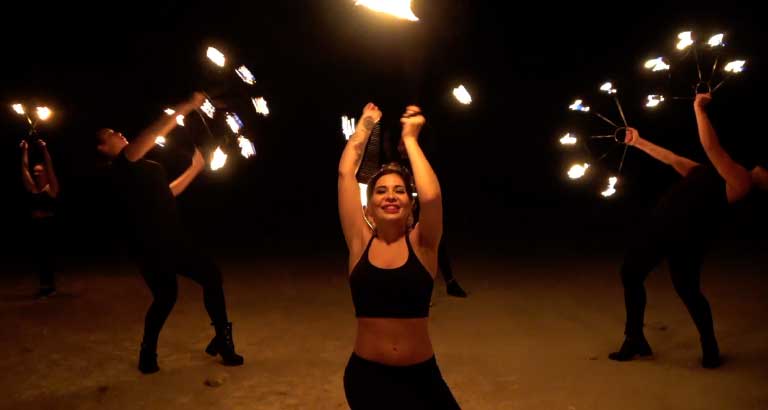 As a foresighted individual, Ranya has plans which involve extensive expansion across the region. “I definitely intend to grow Flames in terms of the number of performers and performances we have. We’ve also had bookings in Saudi Arabia and would like to expand further. That’s another reason that motivates people to book with me – you don’t have the hassle of having to fly in performers and make any other necessary arrangements,” she says.

Ranya believes that Flames is positioned to be the perfect agency as it is run by someone who is both a performer and a manager. “Hence, I understand every aspect of the clients’ and performers’ needs. My ultimate goal is for Flames to be one of the largest, most successful agencies in the region,” she says.

On a more personal level, Ranya shares that she is an animal lover and hopes to make a difference in the lives of senior animals. “I’ve always been a dancer, but I always thought I’d be a vet. I actively support shelters and TNR efforts and hope to adopt as many older animals that most people do not see as very adoptable to give them a beautiful end to their life with a loving family,” she says.

“That’s something I would really like to achieve together with my partner. That’s my family.”