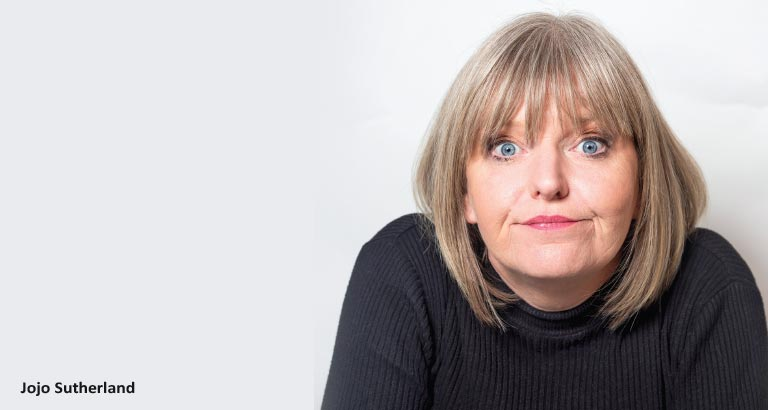 BTM quizzed Scottish comedian Jojo Sutherland ahead of her appearance at the Dilmun Club’s comedy night this month.

Stand-up is what I love doing most and where I can just be me either as a compere or doing a longer set.”

Your start in comedy came through something of a medical epiphany. Can you tell us a bit about that?
In 2000 I had a brain haemorrhage. At that time, I was a single parent on income support with three children having just got divorced, had my house repossessed and on the brink of bankruptcy and I thought….comedy! Genuinely, I saw an advert for a stand-up comedy course and, having trained as an actor many years before, had decided, following the haemorrhage, that I wanted to get back into acting – having a life-threatening illness tends to make you revaluate what is going on with your life and I just knew I wanted to be back on stage.

Having made the decision to become a comedian, how did you actually go about getting started?
I did a 10-week comedy course and performed my first stand-up gig, of five minutes, in December 2001, I’ve never looked back – I went from  short spots in local comedy clubs to performing all over the world and it’s only taken 17 years!

You’ve had a long association with the Edinburgh Fringe Festival but are also popular as a compere and participate in training. Which role do you prefer and why?
I live in Edinburgh so am lucky to have the world’s largest arts festival right on my doorstep and have always performed in some capacity at each fringe, from stand-up to plays, to double act and running stand-up courses.

Stand-up is what I love doing most and where I can just be me either as a compere or doing a longer set. Comedy has led me to do all kinds of other things with radio and writing and also training and mentoring others, all of which give me a real buzz but nothing beats the spotlight on stage and a microphone in hand making people laugh sometimes about things that you wouldn’t normally associate with being funny – like nearly dying!

The Herald called you “deliciously cruel…The best antidote to mewling rugrats” what was that all about?
The Herald quote is in reference to the jokes I tell about my kids – I tend to use them quite a lot for my comedy – and my “healthy neglect” attitude to parenting.

Aside from Riches to Rags, which is apparently based on your own life, where does the inspiration for your comedy come from? How do you know if something’s going to be funny?
My poor kids bear the brunt of most of my comedy and I tend to just take my real life on stage and share with audiences – I find out if it’s funny when I get up there and, so far so good. I tend to get a lot of positive reactions, I think because a lot of what I talk about is personal but relatable and most audiences can recognise themselves in what I laugh about. I very rarely get negative responses but that might be because I’m an angry Scottish woman and people are too scared (hahahah). I’m not really scary, but I’m very honest.

Is this your first time in Bahrain? Have you been given any tips of what to expect (other than soul-destroying heat)?
I’ve been to Bahrain a few times so looking forward to returning, although the heat and my pale, practically blue Scottish skin won’t agree and sadly it will be a bit of a flying visit although one that can’t pass without a visit to the souq.

Will you be doing your Riches to Rags show in Bahrain or do you have a different routine for on-the-road performances? Basically, what can the audience expect?
My solo show [Riches to Rags] is specifically about events that have happened in the last few years and will be at the Edinburgh Festival this year, so Bahrain audiences might get a sneak preview of some of what that is about but they will more likely get my observations on being a parent in a fast changing, technical world and my “life is too short, let’s have a laugh” attitude with perhaps a healthy dose of cynicism thrown in.