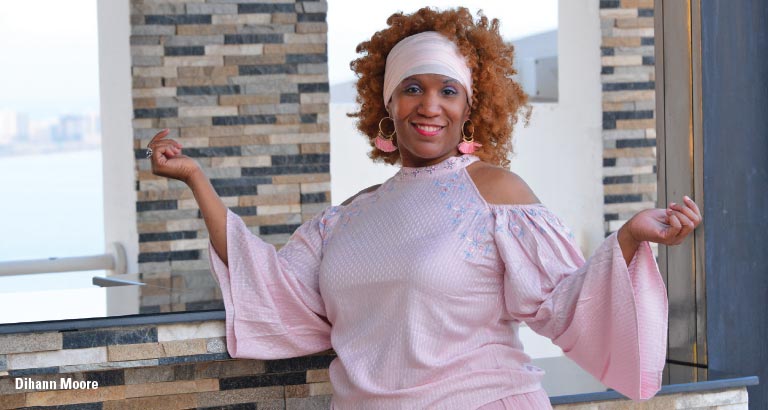 Although born in Washington DC, jazz and soul singer Dihann Moore calls herself a New Yorker, having lived in the Big Apple for many years. Singing since the age of three, music has always been in her blood. “I always had my own group of some kind,” she says. “I sang in elementary and high school. I’m really good with harmony. So, I led various groups and bands, and sang in a classical choir.

“My mom never really encouraged my music career in my younger years, which she apologised for years later. She wanted me to have a degree to fall back on, so I went to university and got a degree in nursing.”

Having fulfilled her mother’s wishes, she finally decided to pursue a music career. After leading a few groups post nursing school, she decided to become a solo artist and write and produce her own music. She signed an album production deal with one of the producers who helped record the hit Give Me Luv – Alcatraz. With this hit, she was able to tour in Asia, the US and Europe, where she appeared on Top of The Pops in London, as Give Me Luv became a Top 10 hit on the Billboard Dance Charts. “The original recording of Give Me Love, in addition to being licensed on various labels over the years, was also included in The Wolf of Wall Street soundtrack,” adds Dihann. “So, from there, I started getting calls to do a lot of dance music records, even though I never intended to be a house music artist.”

Feeling she needed to spread her wings, Dihann left Washington DC for New York to further her career. “When I moved to New York, I began playing with a wedding band while continuing to work on my own music,” she says. “Playing with the wedding band helped me to focus on learning more jazz tunes and form The SheGroovee Band. Knowing those tunes also led me to doing more jazz gigs eventually.”

Dihann is particularly moved by the effect her singing has on other people. One occasion in particular stands out for her when she chose to go out and play during the Christmas season, working on earning airfare to be with her family for the holidays. “I was singing songs but there was no emotion in it, because I really wanted to be with my family instead of the subway that night. So, I decided to change and sing my own Christmas songs that I had written,” she recalls. “The response I got was overwhelming, with one man breaking into tears, telling me that the words I sang had so touched his heart.” Dihann pulled on the heartstrings of many others and before long collected enough money for the ticket. “That’s why I always try to sing from my soul, put emotion into it and uplift people with my songs,” she adds.

Her passion for singing has taken her all over the world, including Africa, Europe, Asia and many places in the US. Her venture into the Middle East came from a chance encounter in New York, where a Syrian man saw her perform and urged her to consider going to Dubai. She has since played in the UAE, Qatar and now Bahrain. Dihann and the SheGroovee Band were the resident performers at Coda Jazz Lounge in Juffair, where she crooned for the crowds until recently.

Currently performing at Calexico Sunday Sessions, Dihann has a few projects in the pipeline and manages her own record label, SheGroovee Records, as well as her entertainment company, SheGroovee Entertainment. “I want to focus on my writing and recording at the moment, so I am selective with my live performances,” she says. “I really want to finish the project that I’m working on, which will be a six-song EP with singles. Ultimately, I want to tour doing my own music. I want big stages!”

Dihann enjoys all kinds of music, anything that moves her, be it jazz, soul, rock or opera, and says: “I just love music – period.” Some of her favourite artists are Ledisi, Jill Scott, Hiatus Kaiyote and Tedeschi Trucks Band, as well as classic artists, such as Aretha Franklin and Stevie Wonder.

Finally, Dihann’s advice to aspiring entrepreneurs, singers and entertainers is to “go with your heart and don’t give up, no matter what!”