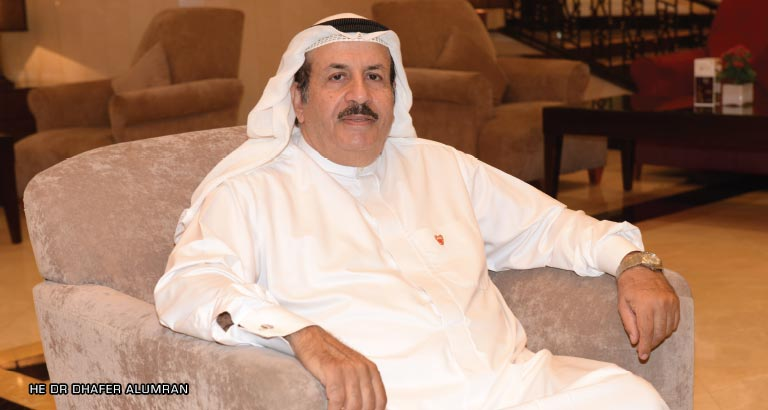 As he ‘officially’ retires, HE Dr Dhafer Alumran, former Assistant Undersecretary for GCC Affairs and Western Countries at the Ministry of Foreign Affairs (MoFA) shares thoughts and wisdom after 45 years in the service of his country.

Education and Family
My mother was Lebanese and I went there to study at the age of nine. It makes you tough. I was 16 years in Lebanon and seven in Los Angeles, all for study. I ended up with a PhD in management and economic development.

When my mother came to Bahrain, she was a teacher she was one of the first group that came here. She became principle of a school and that’s how my father met her. He was head of education in Bahrain for 50 years. He was known as the ‘father of education’ in Bahrain. And my mother helped him, there were no ministries in those days.

They had a big effect, having a father that cares about education – my brother, sister and myself were all well-educated. My wife is a full professor – the only Bahraini professor at the University of Bahrain. We got together at the American University of Beirut (AUB) and married in 1973 before going to Los Angeles. She is an educational psychologist working with students who need special care. That’s how I learned to deal with people, which is a skill in itself, at AUB she convinced me to take a course in child development and it was very useful.

Diplomacy and Bilateral Relations
I became an ambassador [after moving to MoFA] here in Bahrain. I think I excelled as a bilateral guy. I come from a unique family background with a long history. My mother was from Lebanon and her mother was from the UK. My father is originally from Saudi Arabia but his family came from Kuwait. I have a small immediate family but a large extended one. My paternal grandmother was from Oman and her mother was from Rangoon – so there’s a mixture of east and west. This makes me a very international guy. It makes me appreciate my friends, the ambassadors; I feel they are related to me and I work with them with empathy to make them happy. In Bahrain, that means they will make Bahrain happy. They come here to take care of us, we have to do the same.

Bilateral relations is a difficult job if you don’t know how to handle it. Sometimes, there are ups and downs and problems. [You need to know] how to deal with them in a diplomatic way and make Bahrain a friend to the whole world. We have been trained by world leaders. If you remember the late Amir, Shaikh Isa, he was the star of the Gulf, open minded and friendly, he made Bahrain a friend to the whole world. Now His Majesty King Hamad bin Isa, His Highness Crown Prince Salman bin Hamad, and the Prime Minister, His Royal Highness Prince Khalifa bin Salman, want that if [our] people go anywhere in the world and someone asks where they are from, that people will say Bahrain is a good place with nice people. This is our wealth.

My first school was Sacred Heart Catholic school, we were taught by Italian nuns and they made a big impression. It affected me and made me multi-cultural. In Bahrain His Majesty cares that there is no discrimination for all religions. His message is that we live together – Christians, Muslims of all sects, Jews et cetera. If they are in Bahrain, they are part of the Bahrain family. This gives stability and discrimination is not allowed under His Majesty’s laws. People feel that they have a second home here.

In my job as Assistant Undersecretary, I was concentrating on bilateral relations between Bahrain and the rest of the world. You need to become close to all the embassies, be their best friend so that they are also your friend, so they will also help you. It’s a two-way thing. I’m responsible for forging agreements between Bahrain and the rest of the world. It’s a difficult job because countries have different people and different ways of looking at things. You have to understand their cultures and how they think to get them to come together with you in some agreement. I have counted hundreds of agreements signed by Bahrain and what’s important is that they should be practical and can be activated – action is benefit.

My best mentor in this was Shaikh Mohammed bin Mubarak. I worked for him in the MoFA in 1995. He said, ‘they have enough economists in the MoF’ – he wanted help with finance but I learned diplomacy with him. I consider him the father of diplomacy. People would come in frowning and irritated and leave smiling. It’s the art of convincing people that you are good friends. I learned a lot from him.

Patriotism
My father built in a sense of the importance of loyalty to Bahrain. When young people come to the Ministry of Foreign Affairs, I tell them that the first thing is to love your country, it comes first. You should perform as well as possible because then your country will be better and you will be happier. Even though I am retired, I still have a job in training young people in diplomacy. Respecting your flag is important. In Lebanon I was a scout and a ranger. One day we went up into the mountains overnight and there were wolves et cetera. Each person took a turn to protect the group flag. We didn’t want anyone to steal the flag because that was the challenge. In the middle of the night, guys came to take the flag. They were beating me and I was calling to the others, I didn’t give in. If I’m doing that to protect the flag of a scout group, what about the flag of my country – that must be more important.

After 45 years’ service, when I think back on my career, it makes me satisfied that I have served my country and, of course, it’s still got my loyalty. Even though I have left the ministry, the ambassadors still contact me if there is a problem – I am a very good problem solver.

Lessons Learned
Three lessons I learned on my long journey. The three Ps: Persistence, to keep going with enthusiasm when everyone expects you to quit.

Problem solve and negotiate. I was lucky that I got time with Ambassador Kurdi, he was head of the negotiating team for KSA in the GCC-EU negotiations [free trade agreement]. I used to sit on his right and listen to how to handle matters of negotiation. He showed me that if you want to be a good negotiator, you have to be a good listener to appreciate what they say. It’s something that’s really very important because all my life that’s been my job. If you want to be successful, you have to be a successful, problem-solving manager.

Patriotism. I’ve devoted my love to my country and the legacy from my father. Position and money were not my main goals. Still, this love does not stop for me at the border, my view is also that we are all world citizens.

Bilateral relations is a difficult job if you don’t know how to handle it.