Is Patience A Virtue? 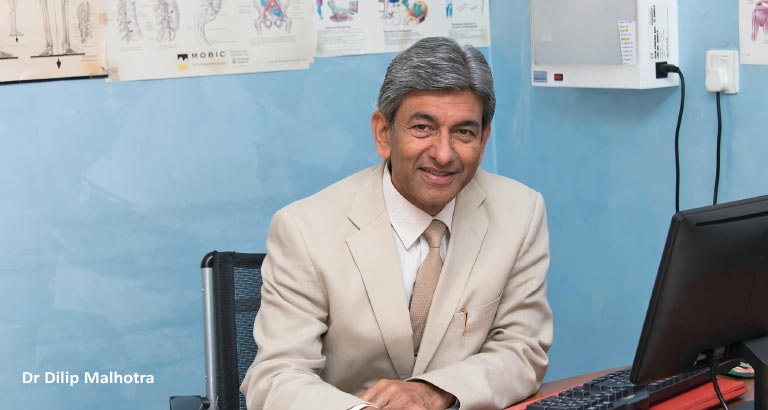 One of the country’s most senior and distinguished orthopaedic surgeons, Dr Dilip Malhotra, speaks to Liz O’Reilly about life in Bahrain and a new beginning following the one disappointment of his long career.

Dr Dilip Malhotra was a small-town boy; he received his schooling on a remote Indian island. However, he considers the Andaman and Nicobar Islands among the most beautiful places and would urge readers to visit at least once.

After finishing school and under-graduation, he made it to the country’s most prestigious Post Graduate Institute of Medical Education and Research in Chandigarh, India. He undertook further specialised training in the UK before coming to the Kingdom to work at the International Hospital of Bahrain (IHB), on a one-year contract, in February 1988.

His family joined him and his two sons were educated on the island before heading overseas to become orthopaedic surgeons themselves.

He says: “I am very happy in Bahrain, it has been good for me and my family. My wife also enjoyed her time here tremendously, participating in various social and charity events. Being a keen sportsman, I was also able to pursue all my sporting activities”.

Dr Malhotra has to his credit several papers published in international orthopaedic journals. One of his research works has been acclaimed internationally and is referred to as the ‘Malhotra Classification’ which has mentions in many orthopaedic text books.

The eminent surgeon stayed at IHB for 29 years. However, for the last 16 months of his employment he went unpaid!

In February 2017, Dr Malhotra took the decision to join his long-time friend and colleague, Dr Jamal Saleh, at the OrthoCare Centre, a full-service orthopaedic clinic offering X-ray, physiotherapy and minor procedures such as casting and joint injections with necessary surgeries carried out at nearby accredited hospitals, including the recently opened Al Salam Hospital in Sanad, with which the clinic is co-owned.

When Dr Dilip Malhotra left IHB he was denied 29 years of indemnity. And, despite a successful court case brought by him and around 30 colleagues against the hospital, the monies, running into hundreds of thousands of dinars, are still unpaid. The case is currently in the Court of Execution.

Dr Dilip Malhotra says he is most concerned about the hundreds of colleagues who were left in dire financial straits through non-payment of salaries and indeminties.

He explains: “I feel guilty. When I left, because I was the most senior person there, many other people left. If I had not stayed so long, perhaps some of my colleagues would have left earlier – some, who got out in the early days of the financial problems, did get paid.

“Why did I stay? I suppose some sense of loyalty. I kept thinking things would get better. There had been times over the years when the wages had gone unpaid but things always improved. IHB was a good private hospital. I would say, for many years, the best in Bahrain; we treated many of the elite. But this time, things went from bad to worse.”

The hospital was eventually closed by the National Health Regulatory Authority (NHRA) in mid-2018 due to non-compliance issues. At the time, the reason given was for remedial maintenance. It has never re-opened.

“I hope that the concerned authorities would take appropriate action at the earliest, to ease the suffering of the IHB employees, and the relevant embassies would ensure that the pending dues would also reach their respective citizens who have since left the island,” says the doctor.

I am very happy in Bahrain, it has been good for me and my family.”