Investing in the Future - Jerad Bachar 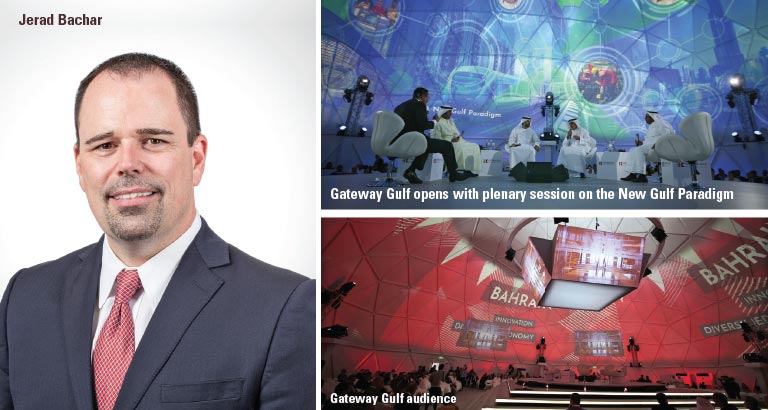 The inaugural Gateway Gulf investment forum event took place in May and attracted more than 500 potential international investors as well as the same number of local and regional businesses. Bahrain’s first large-scale investment forum, it was established under the patronage of HRH Prince Salman bin Hamad Al Khalifa, the Crown Prince, and conceived by Prince Salman and the EDB chief executive Khalid Al-Rumaihi.

Jerad explains: “The focus was to target investors from around the world across various sectors. We had close to 500 investors, many from Asia as well as the US and Europe, and they were looking at projects across the whole economy – logistics, health, education, real estate, tourism and, of course, oil and gas. In total, close to 1,000 people attended and the focus was putting foreign investors together with local businesses and project developers.”

A year from inception and six months in the planning, the forum will now run every two years with the next one being in 2020.

To get the project off the ground the EDB reached out to a strategic advisory firm. This facilitated access to a wide network of investors, many of whom came to Bahrain for the first time. Jerad adds: “It was a great opportunity for us to speak to investors that we might not have otherwise reached, without this globally focused platform.

“The premise was to promote Bahrain as the gateway to the Gulf region – both economically and geographically. Our connection to Saudi Arabia is one of the most attractive aspects of Bahrain to manufacturing and tourism-related companies, simply because it is the largest economy in the Gulf, but Bahrain also offers ease of access to the rest of the region.”

And though the forum itself will be a biennial event, it will continue to be an investment promotion vehicle throughout the intervening years. Jerad continues: “There was interest from investors in the domestic market but also in the regional market, such as from manufacturers who can be based here and export into the wider region. Tourism services [such as restaurants, retail outlets and entertainment venues] in the domestic and regional context are also areas of opportunity.

“We had close to USD2 billion in tourism and real estate assets presented during the forum, such as Bilaj Al Jazayir, which is a primary focus project. It will be a mixed-use residential, retail and hospitality development, and is due to begin phase one development before the end of the year.

“The forum attracted business leaders and investors from several multinational companies who are keen to explore opportunities in the Kingdom. Several projects were featured at the forum, including residential and hospitality real estate projects. Ajmera, one of India’s largest real estate developers, announced a residential tower in Bahrain Bay, and Edamah formally announced the Jumeirah Al Sahel Resort, located close to Bahrain International Circuit. For projects like these the EDB works to develop investment, coordinate with regulatory agencies and promote the projects in alignment with the country’s investment promotion activities.

“We have had success on the promotion of the Kingdom through the Team Bahrain approach, which highlights effective collaboration among government and private sector organisations. This approach supports the ongoing regulatory reform and easing of restrictions to make Bahrain more business friendly. All this, together with Gateway Gulf, means it’s looking very positive for the future.”