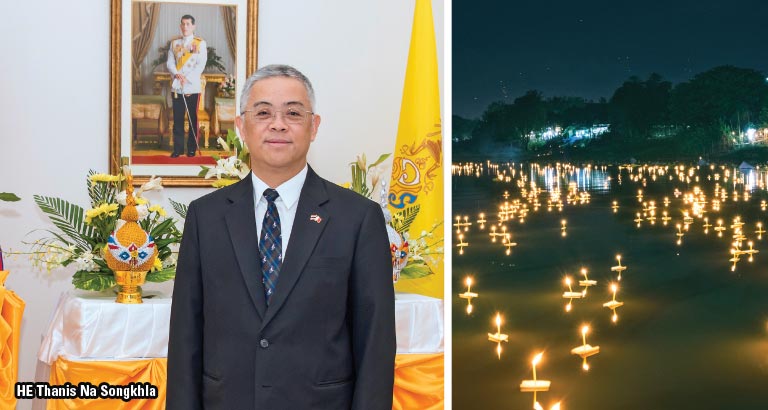 Having previously served as Consul General in Jeddah for more than three years, His Excellency was already familiar with the region when he took up his first ambassadorial posting in Bahrain in April.
A political science graduate, he has worked for Thailand’s Foreign Ministry for more than 30 years and has vast overseas experience – from Chicago to Japan.
He says: “I am very much enjoying Bahrain. The people are friendly and welcoming and I have had a warm reception from the official authorities.”
The ambassador says his main task during his tenure is to build on the two countries’ already excellent relationships, which see trade figures at USD249 million annually, and to serve the approximately 8,000 Thais residing in Bahrain, who mainly work in the cosmetic and spa industries as well as in private households.
“We recently celebrated the formation of the Thai Club, which is accredited by the Ministry of Labour,” says His Excellency. “It’s about gathering the community together to take care of the well-being of Thais in Bahrain and to provide aid to any Thais in distress. It was launched on April 30 and has done a lot of work already. It’s a non-profit and has activities and information resources to help Thai people in many ways, for example during illness, with information, money and charity. It’s also involved in culture to promote better understanding between Bahrainis and Thais.”
Of his plans for his time in Bahrain, the ambassador explains: “I have been instructed by my foreign minister to help promote the good existing relationship and make it concrete. We have more than 26 Memoranda of Understanding in many areas, for example, social and cultural and cooperation in many medical fields, trade, science and agriculture. We think it’s a time we should look to review [cooperative ventures] and implement these for future progress.”
To that end, there was a mid-year review in August with the Ministry of Foreign Affairs in Thailand, which evaluates areas of cooperation with the ministry in Bahrain. Dignitaries from both countries participated.
His Excellency explains: “This was the follow-up meeting from last year when the Thai Prime Minister visited Bahrain in April to celebrate 40 years of diplomatic relations. At that time there were plans to strengthen fields of cooperation. That was followed by the visit by the Foreign Minister in February this year for the SJC High Joint Commission – which was the third one to take place between Thailand and Bahrain. He met with Shaikh Khalid bin Ahmed Al Khalifa, the Minister of Foreign Affairs, as well as having audiences with His Majesty King Hamad bin Isa Al Khalifa and the Prime Minister, Prince Khalifa bin Salman Al Khalifa.”
During the mid-year review, officials were tasked with discussing the planned visit of Shaikha Khalid to Thailand.
In terms of cultural cooperation, the next big event is in October when the embassy and the Thai community will come together to celebrate Loy Krathong Festival (pictured) – one of Thailand’s biggest festivities in which people gather around bodies of water, from pools to lakes, and release lotus-shaped rafts decorated with candles, incense and flowers to pay their respects to the goddess of water. In the spirit of friendship, local people will be invited to take part.
His Excellency concludes: “Bahrain and Thailand have really friendly relations. We honour that and want to do our best to make it sustainable for the benefit of both sides. The relationship is long standing. Some Thai people see Bahrain as their second home and I feel that some Bahrainis feel that way about Thailand, too. From the Royal families to the people, relations are excellent on all levels.”