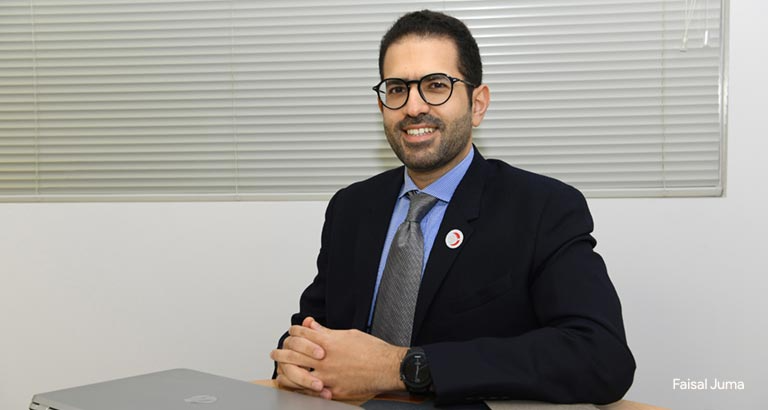 The Kingdom of Bahrain has always been renowned for its charitable societies and endeavours. Kristian Harrison spoke to the Rotary Club of Salmaniya’s incoming President and current Chairman of the Fundraising Committee, Faisal Juma, about the club’s plans once he assumes the hotseat in July.

The Rotary Club of Salmaniya has a long history of fundraising and organising community projects in the Kingdom. Inaugurated on April 15, 1971, the first meeting was held on April 28 of that year at the Delmon Hotel with 30 charter members, nine of whom were the Board of Directors led by the first President, HH Shaikh Isa Bin Abdulla Al Khalifa.

On June 9, 1971, the formal admission was received from Rotary International and this is considered as the founding date of the Salmaniya branch. The presentation of the Club’s Charter took place on December 16, 1971 – Bahrain’s first National Day following independence from Britain.

As such, the organisation is proudly celebrating its 50th anniversary this year and Faisal is busy organising a slate of fundraising events, with proceeds to go towards important community projects. The club currently has 60 members, ten of which are women and also inducted two new members this year.

“Our most famous and biggest annual event is the Raft Race which is organised at Al Bander. However, this year it had to be cancelled due to the COVID-19 pandemic.
“I therefore had an idea to do a virtual weightlifting event with F45 Bahrain at the Kick-Off Academy in Saar, but the proposal was rejected for the time being by the Ministry of Health.

“Ultimately, I came up with an alternative (to the alternative!) which is four virtual events, where our sponsors can showcase their company names and logos.”
The first of these is a Sponsor’s Appreciation Day, planned for the last week of June, where a presentation will be delivered thanking sponsors for their support and a discussion of the Club’s upcoming charitable projects.

This will be followed by a Rotary Awareness Day, pencilled in for August, which will be a way to introduce members of the public to the Rotary Club and encourage them to join.
In November, a ‘Bahrain’s Got Talent’ night will be staged, which will be open to Bahraini nationals or Bahrain-based talent of all ages and feature a wide array of artists, bands and more.

Finally, there will be a Quiz Night to be held in December. Faisal is also hoping to reapply for the F45 Playoffs later in the year when the Covid-19 situation is hopefully clearer.
“At all of these events, our sponsors can showcase their company names and logos, and we will also offer them social media coverage such as posts on Facebook and Instagram,” Faisal explained.

Ultimately, the funds raised at these events will go towards the community projects run by the Rotary Club of Salmaniya. This includes the Greenhouse Project, where seeds are planted by children from the Autistic and Down Syndrome Societies, whom are then brought back later in the year for them to harvest the crops that they’ve grown.

Furthermore, there is the Dream House Project, where the club chooses a couple of houses per year to renovate.

Faisal explained: “There are a number of unfortunate people in Bahrain who live in poorly-maintained houses as they cannot afford repairs, so after we check the title deeds for ownership, we completely change the houses, redecorate rooms and improve the quality of the building.

“I also aim to run a couple of training and vocational programmes for those who have struggled to find employment during the pandemic, helping them to find jobs and revamp their CVs.”

The Rotary Club of Salmaniya’s weekly meetings are held every Wednesday for luncheons; doors open at 12.45pm and the meeting starts at 1.15pm sharp, ending at 2.15pm. Regular meeting details are updated every two weeks in advance and the venue is available on the website: www.rcsalmaniya.org, email: [email protected] You can also follow them on their official Instagram account @rotarysalmaniya or on Facebook and Twitter using the handle @rotaryofsulmaniya.