From Aerodynamics to STEM 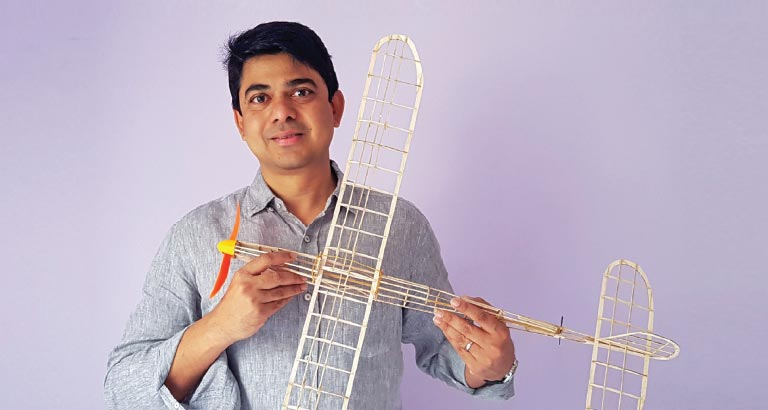 It was my hobby and my passion and 38 years later, I converted it into a business.”

Noor Mohammed explains how a boyhood obsession with model aircraft has led him to found not only an international business but also a STEM promotional system aimed at attracting kids into the field.

Noor’s interest in aeronautics stems from a chance childhood encounter with a basic model plane. He explains: “I got interested when I was eight or nine years old and I saw a small model aeroplane that was operated with a rubber band. That’s where it all started. I got that plane after two years of begging my parents – it was in the 1980s and it was 25 Rupees. I broke it on the first flight and started repairing it; that started the passion that I still have.”

He studied engineering and robotics and then got his Master’s in Business Administration. “From that I went into advertising and marketing. But, at the back of my mind was always my passion,” says Noor.

After several years working in various aspects of commerce, Noor decided it was time to set up his own venture, saying: “It was my hobby and my passion and, 38 years later, I converted it into a business.”

Seeing a gap in the market in his native India, he began by setting up hobby stores retailing model aircraft. He now has four shops in Pune, Mumbai, Chennai and Bangalore, plus a production facility and a substantial online retail business with products related to both hobby and education users.

Noor came to Bahrain in 1999 wanting a challenge. “It’s a small place where lots can be done. You get recognised fast in a small place,” he says.

He launched Avionic Global, in Hong Kong with the aim of ‘Retailing hobby products and promoting DIY and STEM (science, technology, engineering and mathematics) activities across an audience comprising of seasoned hobbyists, entry-level enthusiasts and students’.

He has now set up a consultancy in Amwaj specifically targeted at school children and young people using his expertise in model aircraft design, 3D printing and robotics as a starting point to engage them in STEM activities.

He says: “When I was talking to my children, aged eight and 10, I realised that as much as they are good in their studies, the application to use what they are learning was not there. I saw an opportunity because of my children. Others are in the same position, so I started getting them into STEM activity.

“I started doing STEM in India, took it to grass-roots level to schools and institutes of technology trying to impart the knowledge that there is a lot of maths and physics that goes into designing and producing aerodynamic and robotic projects.

“Here, in Bahrain, we are working with schools and a private studio for kids and adults. These STEM activities are designed to fit the age groups of eight-10, 11-14 and then older ones.

“What we’re trying to do is get the children ready for what they might want to be in the future – an engineer, pilot, space explorer.

“We want to complement the education system that’s already here, going hand in hand, getting kids to ask questions, make it fun. This is an after-school activity at the moment. In India schools have taken it on as a course in school. I would love to take that forward here, as a STEM lab – part of a school’s curriculum.

“The whole idea of starting STEM in Bahrain is not about money, it’s about giving back something that’s not taught here yet.”
Noor can be reached at 34 037-918 or [email protected] for further details.