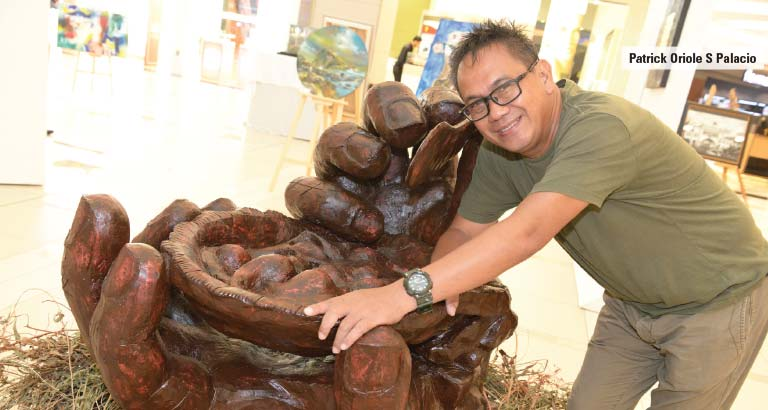 Sculptor, craftsman and artist, Patrick Oriole S Palacio speaks with Behnaz Sanjana about his mission to turn trash to treasure.

Oriole came upon an idea for his exhibit at a recently held art fair organised by the Philippines Embassy in Bahrain, while enjoying coffee and a pleasant breeze by the waterside in Amwaj. “I noticed the shoreline littered with plastic bottles,” he says. “I saw it as an ideal medium for a sculpture and thus was born ‘Tylos Pearl’ - it makes onlookers think of the impact of plastic pollution, and also pays tribute to Bahrain’s pearling heritage.”

The installation, which shows two hands enfolding a pearl, is made primarily of plastic refuse, discarded newspaper, cardboard and resin, and finished off with paint. The great reaction Oriole received for his creation sparked the idea for a Bahrain-based ‘Junk to Art’ project in his mind.

“I have collected 20-30kg of plastic trash from along Bahrain’s coast. There’s so much more I see when I go fishing with my brother,” he says. “All I need is a warehouse or unused space to collect plastic trash and transform it into something worthy. I am not asking for any monetary compensation for what I create, only some support by way of displaying my pieces in prominent places – hotels, malls and such public areas, to raise awareness of the importance of recycling and reducing plastic waste.

“I’d like to tie up with charitable institutions to help raise money for their causes. That is what I aim to do here in Bahrain. Any donations that my art receives will help me to sustain and keep producing more thought-provoking art.”

His inspiration for art stems from his childhood days spent in Leyte, a tropical island in the eastern Philippines, where his curiosity about how things were created was overwhelming. “Roaming a forest and discovering a mystical ecology was ecstasy. I was vividly amazed by the form and shape of wild turtles, the mud crab’s shell and claws, the frog’s eyes, the scales of fish, the iguana’s dorsal spines - they were all extremely beautiful. There was a power I felt to recreate the things I saw, but couldn’t find a way to begin.”

When his 16-hectare corn plantation was destroyed by two typhoons, he made cornhusk dolls and sold them to schools to make good of all the waste. “This sparked off my idea of transforming junk to art,” he says. 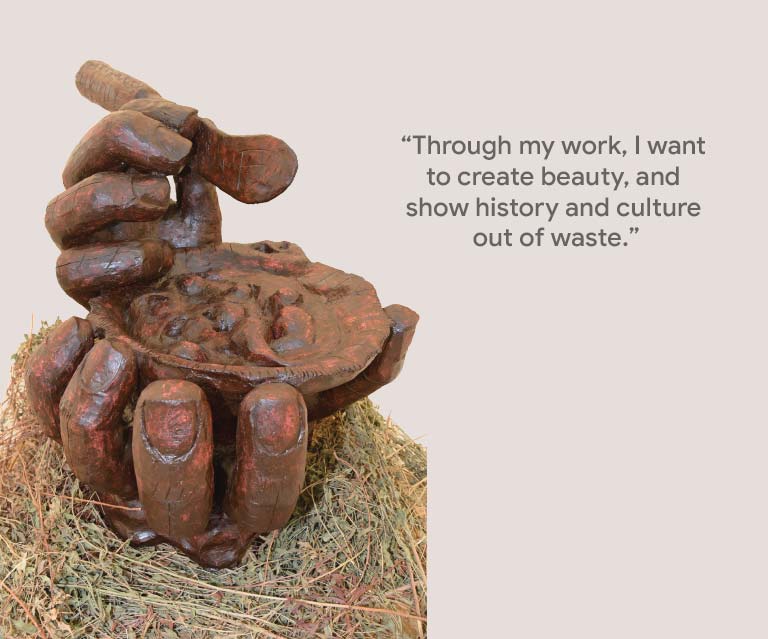 He went on to participate in many national sculpture competitions and his creative confidence increased with each win. “Once a government-sponsored event called for ideas on creating sculptures using trees felled by the typhoon ‘Milenyo’. I was pleasantly surprised to find my entry – an angel kneeling with outstretched hands – on the front page of three major national newspapers. That felt great,” he remembers.

On commission, Oriole has made some remarkable life-size figurines in his home country, and endeavours to see his dream of converting junk to art in Bahrain come true. He says: “Through my work, I want to create beauty, and show history and culture out of waste. We all have a short time on Earth. Why not do something good for the planet and the people?”