From Barcelona to Bahrain 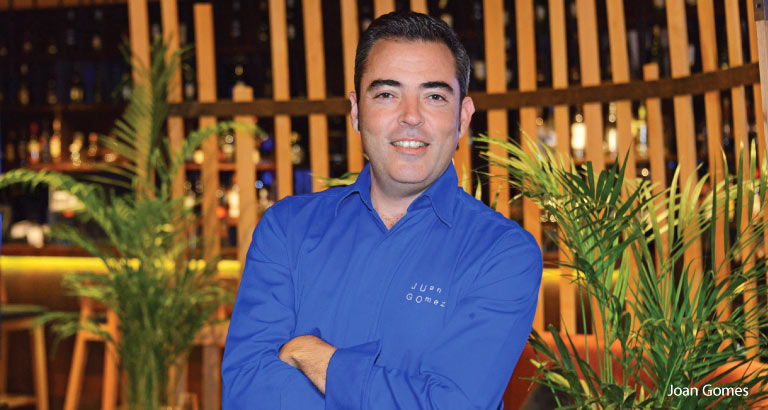 Recently revamped, and boasting an all-new look, La Vinoteca Barcelona is one of the few restaurants in the Kingdom that serves authentic Spanish tapas and Mediterranean culinary delights. Leading the team is the enterprising Joan, born in Barcelona into a family with strong links to the food industry. “My father was a chef, and in my home there’s always been a tradition of cooking,” he says. “From a very early age, I remember cooking in the kitchen, if not with my father, then my mum, who’s an even better cook than him!”

Joan got his first taste of professional cookery when he started working with his father and at various restaurants along Barcelona’s coast. “This was a key part of my career as it showed me the old-school way of cooking, which I still implement in some of my menus today,” he says. At the age of 17 he joined the cooking school of Sant Pol de Mar and worked in Michelin-starred restaurants in Pamplona (northern Spain). He then moved to London for three years and worked as head chef at several restaurants before moving to Sydney, Australia, where he later worked with chef Antonio Facchinetti, who showed him the secrets of Northern Italian cuisine, one of Joan’s favourites.

After a few short stints in Bangkok and Vietnam, he moved back to Barcelona to work with Michelin-star-famed Carles Gaig, who introduced him to Barcelo International, a chain of luxury hotels in Spain and the Caribbean. It was during this time at Hotel Barcelo Raval that Joan began working closely with the Torres company, doing different grape pairing dinners around the world – Germany, Turkey, Bangkok and Sri Lanka. This eventually brought him to Bahrain to lead the project of restaurants for BMMI, including La Vinoteca Barcelona. “This is my fourth year in Bahrain and it has been an amazing experience in a country that I love,” says Joan. “Every restaurant needs to listen to their guests’ needs – they are the key to success. And this is what we did in Vinoteca; now we have a new space that’s much more intimate. It offers the same spirit and magic but with an upgrade – simple but tasty cuisine and affordable for everyone.”

According to Joan, the new menu has the same principles as when it was first introduced – passion for ingredients, respect for guests and innovation. “We came up with a brilliant and simple idea of reducing the size of our tapas and their price, and to be more flexible by offering either a quick dinner or a gastronomic experience with a long set menu,” explains Joan. “We’ve also been working with our sister company, Alosra, to bring specific products that were previously really expensive but are now available to us at a more reasonable price.

“To me, every meal, if cooked with soul, becomes an experience. This is the heart of our new offer – the team behind the cooking. Yes, I lead the kitchen, but I’ve had the pleasure of working for four years with almost the same team, my sous chef Mohammed Hassan and junior sous chef Zablon Loy, among others.  And when you have a good team, you have the building blocks of success.”

Joan is extremely passionate about the ingredients he uses, most of which are sourced locally – 90 per cent of the fish comes from Bahrain as do many vegetables. “Some of the products we buy directly from Spain or Holland, and, when in season, we look for the best produce, such as white truffle from Italy or herbs from Provence, France,” he adds. Of Joan’s many signature dishes, there’s one worth mentioning that makes its appearance on the new menu – Polenta Crust Safi, served with homemade hollandaise sauce, local winter vegetables and black lemon salt.

Joan draws inspiration from his ingredients and guests, and although he has worked with some outstanding chefs, his father, chef Juan Gomez Velasco, is his favourite. Of his food philosophy, he says: “Good ingredients sourced with passion, cooked and treated with respect, filtered with creativity and seasoned with team work.”