From Virtual to Reality 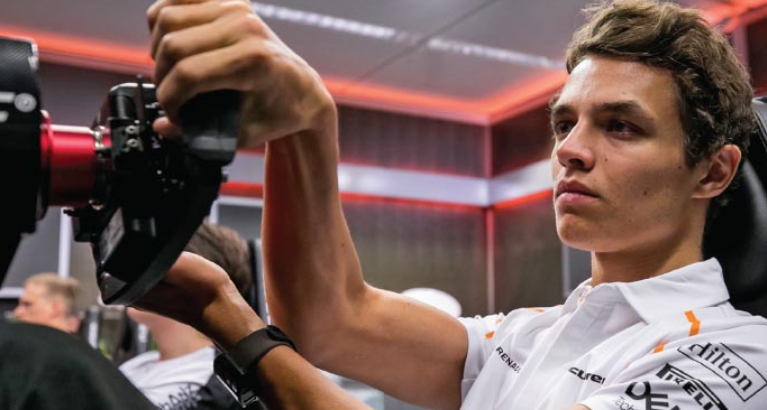 McLaren’s new F1 driver Lando Norris on his big break and why Atyaf e-Racing is a game-changer for motorsport in the GCC.

A  new era is dawning at the McLaren F1 Team as it adds 18-year-old Lando Norris to its driver line-up for the 2019 FIA Formula 1 World Championship. Not only has Norris forged a burgeoning career on the track, he has honed his skills at the highest levels of e-sports.

With the Atyaf e-Racing project set to give a GCC national the opportunity to start along their own path through e-sports and The McLaren Shadow Project, Lando explains why the initiative has the power to change motorsport in the GCC region and how the platform has played an integral role in his meteoric motorsport rise.

Lando, many congratulations on your promotion to a McLaren F1 race seat for 2019. How does it feel to be representing such an iconic brand at the highest level of motorsport?
It feels awesome to achieve my dream of reaching F1, and to be making my debut with McLaren just makes it feel even more rewarding. I was a big supporter of McLaren as a kid growing up, so it is a true honour to be competing with one of the most iconic names in the sport.

As an avid gamer yourself, to what extent has participating in e-sports benefitted your progression all the way to F1?
Without a doubt, gaming has definitely played a significant role on my journey to F1, and it is an area I put a lot of effort into perfecting alongside my racing duties. Not only do I use gaming and simulations to hone my skills in the cockpit, I do it for fun and really enjoy competing against friends and professionals. I had a sim at home when I was younger and it proved invaluable in developing my race craft.

Beyond the physics of racing, what other skills can would-be racers develop in e-sports to reflect real-world competition?
E-sports isn’t just simply about the racing; the platform can go much deeper into the technical side of the sport. Beyond perfecting your driving ability, it is a great way to learn skills in setting up the car, working as a team player and understanding data to improve your performance. It’s a two-way process, too, in that I can use simulators to improve performance on the track, but then we use the track testing to ensure our sims are more accurate.
Unlike any other sport or gaming genre, the transference of skills between virtual and real racing are direct and this is why McLaren launched the McLaren Shadow virtual racing programme this year. It shadows our on-track activity and the winner will gain a seat in our new e-sports team.
You’re one of the few people that can draw a direct comparison between e-sports and on-track racing, so just how closely matched are they becoming?
They are very closely matched and as the technology between virtual and reality improves it will only get closer.
You only have to look at the data between the real F1 car and the results we are getting through the simulators to see just how evenly matched, if not identical, they are now. It is hugely beneficial for myself and the team to always be using one when preparing for a weekend. It is getting better, and while there are a couple of key differences that are harder to overcome, such as G force and risk factor, that’s not to say they can’t find a way to incorporate it in the future somehow.

How important a role can e-sports play in providing a platform for gamers in the GCC region to progress to the highest levels of motorsport?
A potentially game-changing one. For anyone that doesn’t have the opportunities or budget to forge a motorsport career at a young age, e-sports is a fantastic way to develop and hone a vast number of versatile skills. McLaren really believes in this and launched the McLaren Shadow virtual racing programme this year to uncover the most talented, virtual racers from all countries and backgrounds. A lot of gamers-turned-racers have proven to be extremely good in a real car, so I do believe there is a fantastic opportunity for anyone following this path to believe they can one day make it to the top of the sport.

"E-sports isn’t just simply about the racing; the platform can go much deeper into the technical side of the sport.”