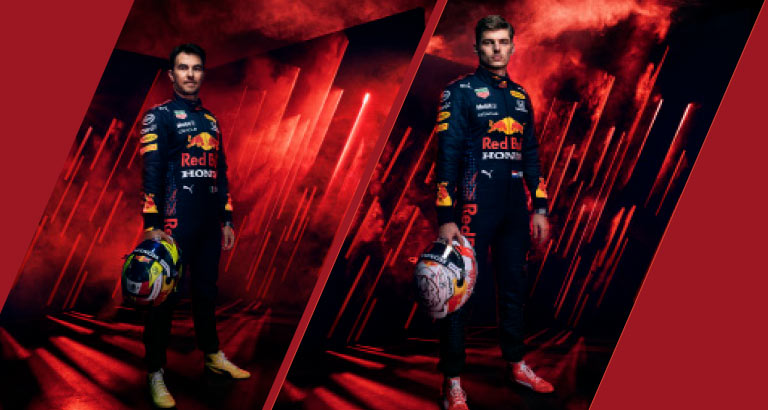 The 2021 Formula One season began in exhilarating style with a thrilling spectacle under the lights in Sakhir.

Whilst Lewis Hamilton won the race in his Mercedes, it was the Red Bull Racing Honda team which really caught the eye of fans and other teams within the paddock.

The car seems to have been given wings over the winter break, with Dutchman Max Verstappen posting the fastest times in testing and taking Pole Position in the race by four tenths of a second. He narrowly finished runner-up in the race by one of the slimmest margins in recent years.

Mexican Sergio Perez has also joined the team for this year and after a difficult start to the race due to technical difficulties, he powered through the field to finish a highly commendable fifth place as he continues to adjust to his new surroundings.

Bahrain This Month spoke to the two drivers during the race weekend.

Perez, who scored his maiden victory in last year’s Sakhir Grand Prix, was understandably emotional upon his return to the Kingdom.

“It’s a very nice place to come to, I enjoy it here. The people always welcome me and it’s always a pleasure, it’s similar culture-wise to Mexico with how chilled out it is. Of course, I have great memories of the circuit after last year.”

He also emphasised that despite the difficulties posed by the COVID-19 pandemic, he’d been training just as hard as any other year.

“I’ve been training hard physically and mentally with the team and engineers so I’m ready for the season. I always try to keep myself as fit as possible and this is an amazing opportunity so I don’t want to leave anything on the table.

“The team, everyone from the mechanics to the engineers to the marketing group, have done their best to make me feel welcome and I’m really excited to be part of the group. I can’t wait to get going.”

Due to Red Bull’s stunning pre-season pace, Verstappen comes into the season as some people’s favourite for the title, or at least with the pressure that he should push Hamilton closer than any one has managed over the past few seasons.

The man himself, however, believes the pressure is no different than normal.

“I feel very relaxed to be honest. It was a great test to be sure, but I can’t wait to get started. I don’t think we’re favourites, Mercedes won seven titles in a row so I just hope we can be competitive and start the season well.

“I have friends here and I enjoy the country. The weather and environment is really nice and I think the night race aspect makes it more exciting.

“It’s great to have fans here in Bahrain in the stands because last year we had none and you can feel the lack of atmosphere. Of course we’re concentrating on driving, but they do make us feel special.”