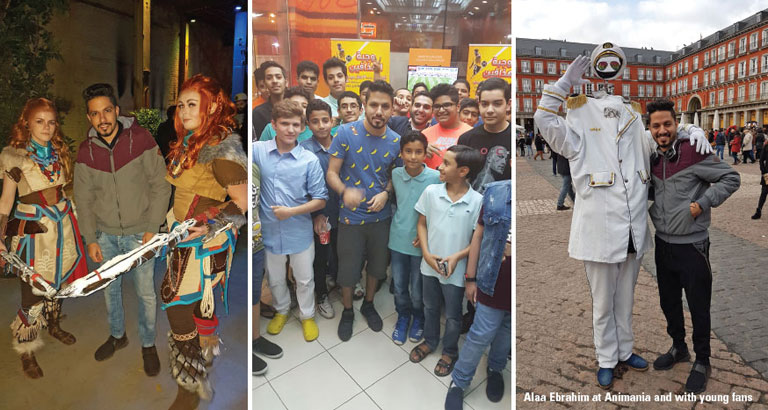 Alaa Ebrahim may only be 26 years old but his zest for life and passion for all things entertainment has seen him become a staggering success. Besides owning two companies – one for advertising and one for e-commerce – he has two million subscribers on YouTube, 806,000 on Instagram and 200,000 on Twitter.

So why do so many people visit his accounts? Well, they’re in Arabic for a start.

I’ve been gaming since I was a child but I got more into the hardcore level at the age
of 14,” he says. “I have been a YouTuber
since the end of 2011. I got interested in it because of a game called Call of Duty. I wanted to teach people the news about the game in Arabic.”

Alaa plays a plethora of games across a wide range of platforms but says PlayStation is his favourite. In the past, he took part in gaming competitions but these days he says he likes to mostly just watch and cover them for his YouTube channel.

Animania 2017 is probably the biggest gaming event in Bahrain. So far, not a lot of details have been revealed but there will be many fun activities such as a Cosplay competition and gaming tournaments.

Alaa says last year’s event went very well and everyone who took part had a great time and he thinks this year will follow suit. He explains: “The gaming tournament is going to be huge this year. The game is Injustice 2 and the winner will be able to participate in an even bigger worldwide tournament. The next stop is Dubai and then Europe – more details will be announced shortly.

“I am just hoping that we get more support from the country regarding gaming and e-sports. It has huge potential globally and one of the biggest drivers for its success is young adults.”

Alaa believes gaming is a vitally important part of life for youngsters across the island. He says: “After all the hard work or study, you need to release some stress by enjoying your time playing with friends or checking out the latest games that are released. Bahrain is a small country and I believe that it has the biggest percentage of hardcore gamers.”

So what’s the difference between a regular gamer and a hardcore one? Hardcore is anyone with a passionate interest in video gaming; they view it as a sport, a lifestyle, and play for countless hours. Regular gamers on the other hand just play for a while without taking it too seriously.

Whether you’re hardcore or not, there is plenty of entertaining content on Alaa’s social media channels. Visit dvlzstation on YouTube for enlightening gaming reviews and follow @3ala2o on Instagram for the latest details about Animania 2017.