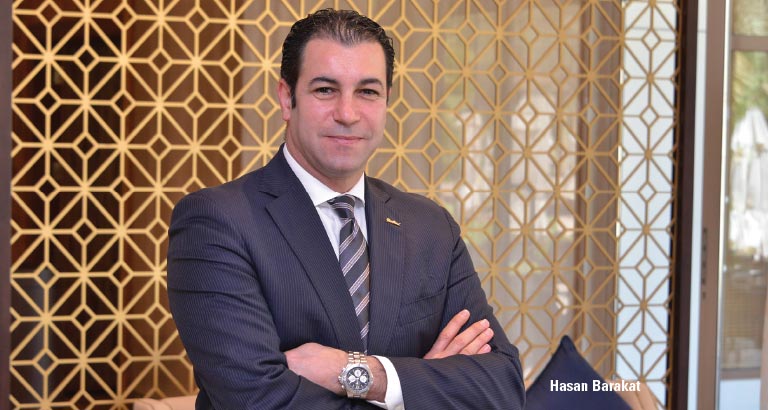 The Diplomat Radisson Blu Hotel, Residence & Spa’s Hasan Barakat has seamlessly taken on the sales and marketing reins at the refurbished property.

Director of sales and marketing, Hasan has been part of the Diplomat Radisson Blu family in Bahrain since November last year. “Prior to this, I held the same position at Murwab Hotel Group, a standalone operating arm of Katara Hospitality in Qatar,” he says. “I have been in this industry since the year 2000.”

The British-Jordanian national has lived and worked in the UK with hotels that are part of famous international chains, as well as a globally recognised brand in Riyadh, where he was associate regional director for sales.

His strong expertise in his field, a major chunk of which has been acquired within the GCC, makes him a perfect fit at his current workplace.

His Bahrain posting is significant to him in more ways than one. “I am not new to Bahrain,” Hasan reveals. “I was here in 2003, for two years, with a major hotel chain. Moreover, I first started my career with the Radisson brand in Amman, Jordan.

“Although Bahrain has changed so much from that time, the kindness and friendliness of the Bahrainis has remained. Safety is also an important aspect when you are relocating with your family and, as an expatriate, I am very happy to contribute to Bahrain’s successful society.”

Speaking of his lure to the hospitality industry, he says: “This industry is a global one and offers exciting opportunities for people, locally and internationally. It is a multicultural environment and I enjoy working with a large team of people from different backgrounds and countries. Interacting with customers from a wide range of nationalities and industries is also great, and I love working in such a dynamic environment.”

After having worked in various departments in the industry, he realised that driving the business through sales and marketing was what he was really cut out for. “Of course, like every job, this one, too, has its challenges, but therein lies the beauty of it,” he says. “There is always room to be better the next day, for turning obstacles into opportunities in a job which has no set routine.”

Hasan is thoroughly enjoying his current professional stint, given the major facelift the property has recently received. “Having seen the hotel in 2003, I am happy to witness how it has evolved,” he adds. “Our investments in the lobby, outlets and rooms are set to pay off. We look forward to offering guests a wonderful experience with all the facilities that we have been working very hard to improve.”

Since the refurbishment, the hotel’s key event, the Friday Brunch, is back. “This will be an upscale dining experience in a sophisticated environment,” Hasan explains. “We also look forward to the advent of Ramadan. Our hotel will roll out the best Arabian hospitality during Iftar on a daily basis.”

The establishment has some attractive deals for corporates, like the 20 per cent early bird discount for Ghabga during the Holy Month. Group discounts for Iftar are also on the cards.

Being heavily involved in the running of the hotel, Hasan says that he is always connected to work, no matter the time of day. He adds: “When we’re at work, we don’t watch the clock. We need to socialise and interact with guests to make them feel welcomed at our property, especially in the event of VIP gatherings or large functions.”

But the doting father loves spending as much time as possible with his one-year-old daughter, and tries to catch all the major football matches on television.