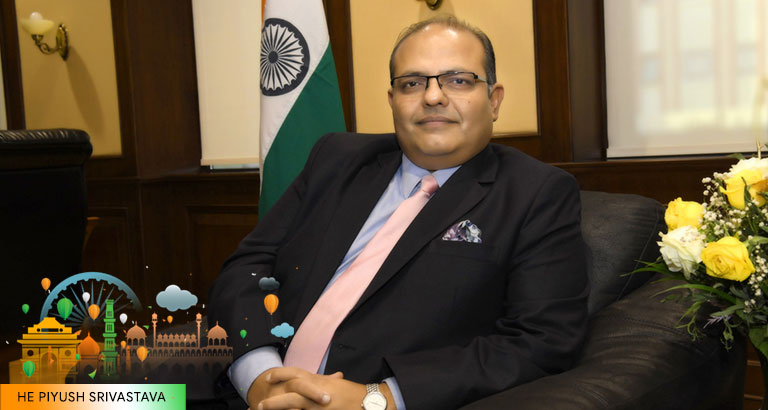 The Kingdom of Bahrain and Republic of India have enjoyed cordial relations, bilateral trade and cooperation that has been firmly rooted in history. Ahead of the Indian Republic Day, which is marked on January 26 every year, we met with the prolific individual responsible for representing the 350,000 Indians residing in Bahrain - the Ambassador of India, HE Piyush Srivastava. Having significant experience in the diplomatic field, including being stationed in Berlin and Ghana, HE aims to apply his understanding of global and regional issues during his tenure in the Kingdom of Bahrain.

Working closely with Bahrain’s leadership and government, HE aims to further strengthen the multi-faceted ties between the two countries in all spheres including political, security, economic and trade, and social and cultural.

CURRENT STATUS AND DEVELOPMENT OF TRADE
In the present context, both countries have bolstered excellent trade and economic relations.  “Key sectors include IT, construction and real estate, food products, iron ore and aluminum, energy, health and financial services.  Though I must add that a huge potential is still untapped,” says HE.

With Bahrain’s Economic Vision 2030, the gateway to the GCC market, has embarked on the journey of diversification of its economy with liberalisation of foreign direct investment (FDI) regime in a number of promising sectors such as financial services, ICT, logistics, manufacturing and tourism. “Several transformative economic reform measures and initiatives, taken recently by both governments for economic revival in the post COVID-19 scenario, have opened up new opportunities for bilateral trade and investment,” HE explains.

In addition, India’s ‘AtmaNirbhar Bharat (Self-Reliant India)’ policy aims to make India a much stronger part of the global supply and value chain.  “These developments have created a new, dynamic synergy between the two countries and have led to the opening up of new avenues for enhanced economic cooperation in sectors such as IT, Fintech, health and pharmaceuticals, defence, space, infrastructure and construction, and energy including solar or renewable energy,” HE adds.

BILATERAL TRADE FIGURES
“The bilateral trade and investment between India and Bahrain have shown a steady growth in recent years with our bilateral trade amounting to around US$ one billion in 2019-20,” highlights HE.

THE ‘PHARMACY OF THE WORLD’
India is the largest global supplier of generic drugs, and also the largest vaccine producer in the world. Hence, the country’s health and pharmaceutical sector has acquired special significance in the post COVID-19 scenario.  “During the pandemic, India has come to be known as the ‘Pharmacy of the world’ having supplied necessary medicines including paracetamol and hydroxychloroquine to over 150 countries around the globe,” HE states.

With more than 3000 pharmaceutical companies producing quality and cost-effective drugs, India has become a global player with a presence in all pharma segments: patented, generic and over-the-counter. “This sector has huge potential of increasing bilateral trade and investment.  This is evident from the fact that about ninety Indian and Bahraini pharmaceutical companies participated in the virtual B2B meeting organised by the Embassy in October 2020,” HE says.

India is at the heart of international and multilateral collaborations in the production and supply of vaccines. At the moment, three major COVID vaccines are at advanced stages of development in India.  “Oxford-AstraZeneca Vaccine will be completing 3rd phase trial in India in December 2020.   We also have agreement for clinical trial of Russian Sputnik Vaccine.  We have two other Indian vaccines i.e. Covaxin by Bharat Biotech International Ltd and by Zydus Cadila at advanced stages of trials,” HE states.

THE ROLE OF CULTURAL EXCHANGE
India and Bahrain have deep-rooted historical and cultural links dating back to Dilmun and Indus Valley civilisations. “The Indian community has immensely contributed in strengthening these links with some of the well-known Indian families in Bahrain having arrived in the Kingdom as far back as 200 years ago. The 200-year-old Shreenathji Hindu temple at the heart of Manama, and the ‘Little India in Bahrain’ project launched by the Government of Bahrain in December 2015 in the heart of Manama Souq area are testimony to that,” HE says.

The Indian socio-cultural associations registered in the Kingdom have also been instrumental in strengthening cultural relations between the two countries.  “This has been possible due to Kingdom’s policies of providing religious and socio-cultural freedom to the expatriate community.  To further deepen our cultural ties, India and Bahrain have also signed a Cultural Exchange Programme during the visit of Hon’ble Prime Minister of India Shri Narendra Modi to the Kingdom last year,” HE states.

SIGNIFICANT DELEGATIONS
Despite the restrictions presented by the pandemic, high-level political interaction continued between the two countries. “Hon’ble Prime Minister of India spoke on the telephone with His Majesty King Hamad in April 2020.  Our External Affairs Minister also held a telephonic conversation with HE the Foreign Minister of Bahrain during the same month,” HE states.

“Hon’ble External Affairs Minister of India, Dr. S. Jaishankar chose Bahrain among the first countries to visit in November 2020, as soon as the opportunity for undertaking physical visits opened up,” HE adds.

HE the ambassador stated that the embassy looks forward to welcoming HE the Foreign Minister of Bahrain, Dr. Abdullatif bin Rashid Al Zayani, in early 2021 for the meeting of India-Bahrain High Joint Commission.  “As the COVID situation improves, we look forward to more high-level political exchanges from both sides this year,” HE says.

WEATHERING THE PANDEMIC
HE states that India and Bahrain have cooperated and coordinated their efforts in fighting the pandemic. “The Indian community, too, has shown tremendous resilience and came together to help the needy members of our community during this time,” HE says.

With the support of the Government of Bahrain, under the Government of India’s ‘Vande Bharat Mission’, over 50,000 Indian nationals travelled back to India from Bahrain.  “Since September, both countries have also implemented the ‘Air Bubble’ arrangement under which national carriers of both countries are operating a specified number of flights both ways. Over 23,000 Indian nationals have travelled back to Bahrain from India under this arrangement,” HE states.

COOPERATION DURING THE PANDEMIC
The Government of Bahrain provided medical and other necessary support to the Indian community in Bahrain aside from support and facilitation for repatriation of Indian nationals from Bahrain. “In addition, the government of Bahrain had also announced the amnesty scheme till December 31, 2020 to enable relaxation in stay for illegal expats including Indian expats in Bahrain,” HE says.

“We remain thankful to the leadership and government of the Kingdom for the exceptional care taken by them of the Indian community during these difficult times,” HE stresses.

The government of India provided 1.5 million Hydroxychloroquine tablets to Bahrain, besides facilitating a special flight to bring Indian nurses and medical professionals to Bahrain for treatment of Covid-19 patients in Bahrain.  “Both sides are further exploring possibilities of cooperation with regards to a COVID-19 vaccine, particularly for supply of vaccine from India to Bahrain,” HE states.

INDIAN COMMUNITY IN BAHRAIN
To date, the Indian community constitutes over 25 percent of Bahrain’s population and form an important link between the two countries. “The Kingdom’s liberal and tolerant policies and welcoming society has made it the preferred destination among Indians which is reflective in the steady growth of the Indian community in Bahrain,” says HE Srivastava.

While a significant number of the Indian community members are employed in blue collar jobs in construction and maintenance, the growing community also consists of a sizeable number of professionals including doctors, engineers, chartered accountants, bankers, managers, nurses and other professionals. “This is in addition to leading individuals at top businesses in Bahrain. The vibrant and dynamic Indian community has contributed to the economic development of the Kingdom, which has been publicly acknowledged by the leadership of Bahrain on several occasions,” HE added. 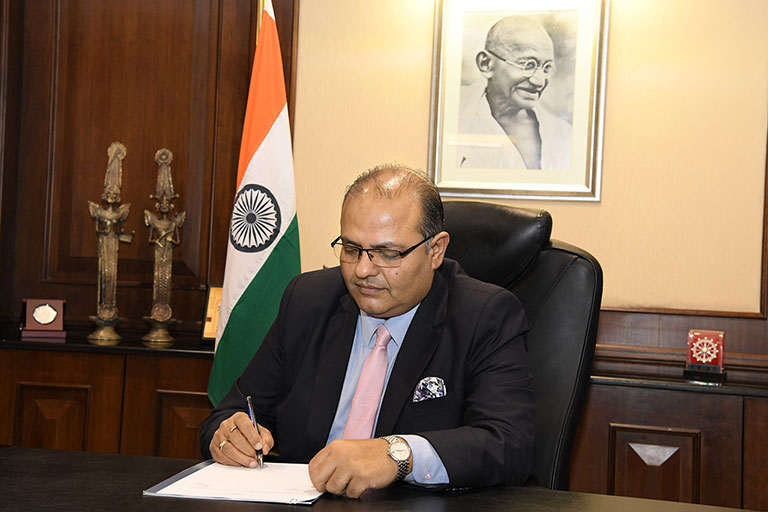 SUPPORTING THE COMMUNITY
Despite the challenges presented by the pandemic, the Embassy continued to provide various services to the Indian community in Bahrain, besides providing medical, food and other necessary support. “The Embassy works closely with Indian associations and other organisations to support and help the community. In addition, we receive full cooperation from the concerned agencies of the government of Bahrain in this regard,” HE says.

All necessary information, awareness and decisions taken by both governments are published on the Embassy’s website as well as its official social media accounts. “As we are now learning to live with this pandemic and the situation is somewhat stabilised, many Indians have returned to Bahrain.  Others who have gone back are also willing to return to Bahrain for employment,” HE adds.