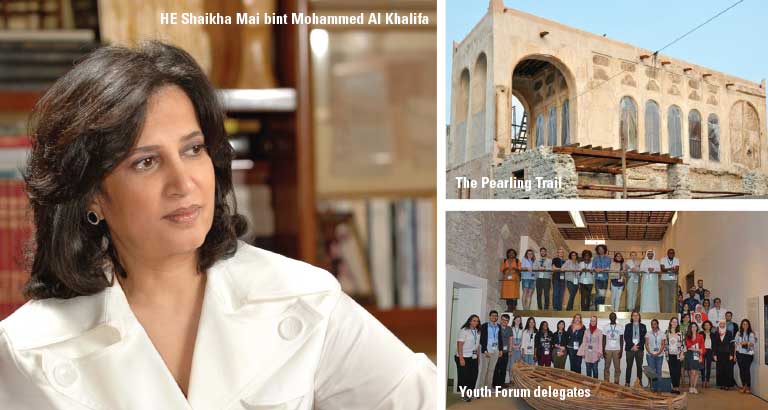 As the Kingdom takes the spotlight on the world heritage stage, HE Shaikha Mai bint Mohammed Al Khalifa, president of the Bahrain Authority for Culture and Antiquities (BACA), speaks exclusively to Bahrain This Month about the importance of heritage.

Bahrain is hosting the 42nd World Heritage Committee session. Can you please explain what the committee does?
The committee is comprised of 21 member states of UNESCO [United Nations Educational, Scientific and Cultural Organisation], where it deliberates on several issues pertaining to world heritage sites, be it natural or cultural sites. For example, conservation of sites, inscribing new sites, sites in danger and other matters relating to the role the convention [Convention Concerning the Protection of the World Cultural and Natural Heritage] plays in capacity building, sustainable development and addressing challenges facing our shared heritage.

How many delegates are expected to attend and who will be involved?
The UNESCO convention has been ratified by 192 countries. Representatives from these countries make sure they attend the annual world heritage meetings in order to keep abreast with all the trends and, in Bahrain, we are expecting at least 2,000 delegates. Many are experts in the field of heritage, including archaeologists, conservators, architects, environmentalists and government officials.

Bahrain became a member of the committee last November but has previously held membership and, indeed, the presidency of the committee. Does the committee change annually?
The committee is an important element in implementing the convention — its configuration is adopted at the General Assembly of the Convention held every two years. Each committee member has a mandate of four years.

Why is membership and the hosting of the 42nd session important for Bahrain?
Bahrain believes strongly in the World Heritage Convention as an important international tool in safeguarding the heritage of humanity. We, alongside the international community, believe that World Heritage Sites belong to all the peoples of the world, irrespective of the territory on which they are located. Through this meeting, we hope to reinstate our commitment to the efforts of UNESCO as well inviting everyone in Bahrain to better know the convention and what it entails. 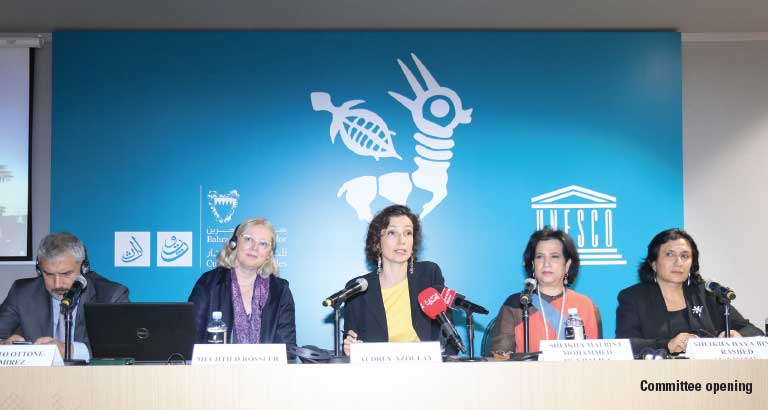 You have previously spoken of Bahrain’s commitment to protecting Arab heritage sites. Please outline the forms this has taken?
The Kingdom of Bahrain, through the establishment of a category two centre under the auspices of UNESCO, aimed to contribute to international efforts in protecting world heritage. The Arab Regional Centre for World Heritage (ARC-WH), based in Bahrain, provides support to all Arab states in protecting both cultural and natural heritage. The support includes providing assistance in the management of sites, enhancing the capabilities of experts working in the field, and to publish information related to world heritage. ARC-WH has been established since 2012 and its mandate has just been renewed by UNESCO for another term, a step which reflects the important role that the Arab Regional Centre for World Heritage is currently playing in the region.

The committee is meeting at a time when heritage sites throughout the Arab world are under threat both from wars and security situations as well as from population growth and development. Is this an area the committee is concerned with and will there be specific discussions on strategies to offer protection?
This is certainly an important aspect of the World Heritage Committee meeting. The committee will examine reports on the state of conservation of sites inscribed on the world heritage list in danger which, unfortunately, has a high number of sites within the Arab region. The discussions and decisions of the committee aim to offer the utmost support and protection to the sites in danger. A number of side events are also occurring during the committee which highlight examples of reconstruction methods of sites which have been damaged in the past. Raising awareness is the first step towards ensuring enough protective measures to the sites currently under threat due to conflict or developmental impacts.

Is it an area delegate countries and organisations are already working on and, if so, how?
Of course, there is an entire session during the committee that is dedicated to the state of conservation of sites, and sites in danger have a specific recognition and are discussed thoroughly. We have seen throughout the years many of our Arab sites being put on the world heritage list in danger as a result of the increased wars and instability. We hope to shed light on these sites and actively promote them for their eventual safeguarding.

The Youth Forum on Heritage is running alongside the committee session. Can you outline the form this will take, expected number of delegates and subjects for discussion?
The World Heritage Young Professionals Forum is in line with the World Heritage Education Programme, and will be taking place in conjunction with the 42nd session of the World Heritage Committee. Thirty participants from around the world will take part. This year’s theme will be focusing on Protecting Heritage in an Ever-Changing World, with an overview of the Pearling, Testimony of an Island Economy World Heritage Serial site and the challenges it faces today. 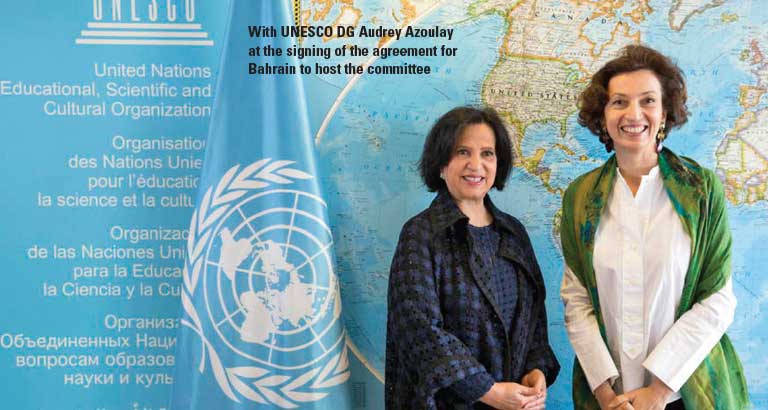 Muharraq, one of the country’s most important heritage areas, is 2018 Capital of Islamic Culture. Please can you outline how the title is bestowed and what benefit it brings to the area and the Kingdom?
Designated by the Islamic Educational, Scientific and Cultural Organization (ISESCO), Muharraq continues to retain the features of the classic Islamic city, with its alleyways winding into residential quarters in combination with larger axial thoroughfares. These special features connected the centre of each farij [quarter] to the seashore and the market which were crucial elements in the pearling economy. Conveying the ideas of Islam, the suburban architecture in the neighborhood is seen to be made of modest exteriors, and screens the interiors that sustain the privacy of domestic life. We want to highlight how old cities can remain vibrant and liveable, breathing through their community and constant care and upkeep. We hope through this recognition that both residents and visitors take the time to explore Muharraq and its textured and rich past and understand the importance of its safeguarding and preservation.

Is development on the Pearling Trail now complete or are there any plans for further restorations?
The restoration of the traditional houses that make the Pearling, Testimony of an Island Economy, is currently under way. This unique World Heritage Site, which was inscribed in 2012, tells the story of the entire economic and social world that revolved around pearling. It will be inaugurated in November, 2018.

What does the future hold for Bahrain’s heritage sector?
I believe one of Bahrain’s strongest assets is its cultural heritage and it is our collective duty and responsibility to safeguard it. At BACA, our priority is to place measures for the protection and preservation of sites. There still exist many archaeological sites that are yet to be excavated, and we hope that these will uncover new findings in the years to come for the many civilizations that passed through Bahrain. We invite the greater public and visitors to visit Bahrain’s many cultural sites and two World Heritage Sites to engage with the history of Bahrain.