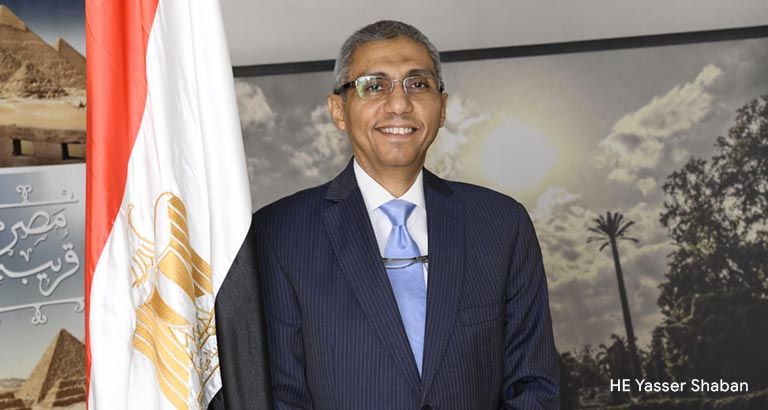 When did you officially take up your position? Is this your first time in Bahrain?
I assumed my duties in November 2019. I was here at the embassy 12 years ago, from 2003-2007 as first secretary and deputy head of mission. I left Bahrain with very good memories. I have two sons and the youngest was born here is 2005. The main characteristics are much the same now as they were then – open mindedness, freedom of speech and belief, hospitality.

In terms of bilateral cooperation, a lot of things have developed, also the Egyptian community has grown compared to when I left. Bilateral trade has doubled and investment has almost doubled.

Is this your first ambassadorial posting and, if not, where have you been before and how do other places compare with Bahrain?
It’s my second posting as Chief of Mission, I was also Ambassador to Mexico from 2013-2017 and I previously worked in Brazil as Vice Consul General. It is not a matter of searching for differences. I think the Arabs and the Latins are quite similar in terms of family bonds, welcoming foreigners and hospitality.

Regarding differences, I look for the positive. When you work in Arab countries the duties are much more than in Latin countries because the Arab circle comes within the three top priorities for the Egyptian Government’s foreign policy. Egyptian communities are much larger.

Approximately how many Egyptians are there in Bahrain? In which sectors are they mainly employed?
There are approximately 25,000 in various sectors of the economy such as doctors, university professors, lawyers, legal advisors in the Ministry of Justice, pharmacies and hospitality, from GMs to bellboys. They are also in microbusinesses and running their own companies.

What are the current trade figures between the two countries?
USD550 million. Bahrain exports USD300 million in raw alluminium, iron pellets and petrochemicals and imports USD250 million in fruit and vegetables, car parts, textiles such as our famous Egyptian cotton, sheesha and other products. We hope to improve this.

On investments, the most important thing is that we have to direct people towards the industry and services sectors [in Bahrain] – most investment till now has been in the financial sector. I always look toward convincing the business sector on both sides to try pilot projects related to industry and services, it creates jobs and helps communities. Foreign Direct Investment is a sector which already sees bilateral trade. We should also have a direction for this to go into service jobs which gives stability for capital, unlike the stock market, and helps bilateral trade. 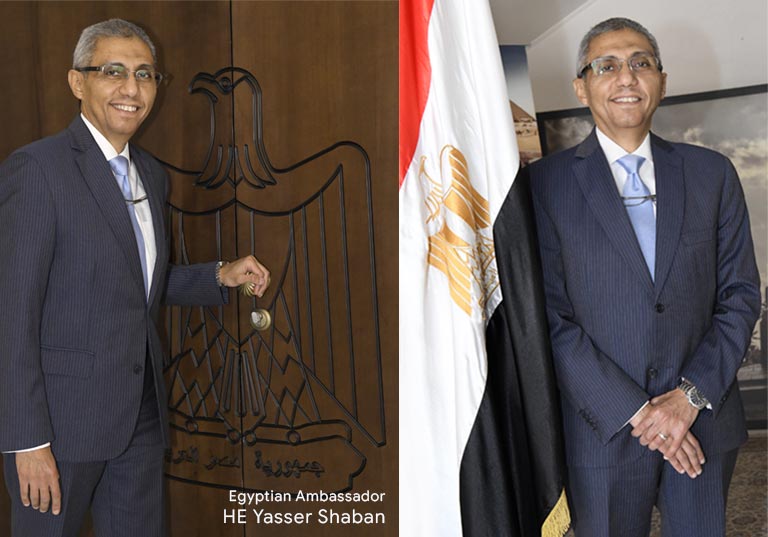 Your predecessor mentioned the need for and challenge in implementation of existing trade agreements. Is this something you will be working towards?
There is the need to follow up on the bilateral legal framework in order to execute agreements. There are 48 agreements covering all kinds of cooperation between Bahrain and Egypt – so, we need to execute the legal framework and draw up action plans. One of our main priorities is economic – mutual, bilateral investment – and then there is also cultural and academic affairs. The academic takes priority but cultural is also important as it shows the personality of each country.

From our point of view the areas for development are pharmaceutical and medical facilities. From Bahrain we look at aluminium, petrochemicals and the tourism sector.

Those are the main areas of bilateral exchange but there is also education and particularly higher education – we really appreciate the efforts of the Prime Minister and Crown Prince in the development and evolution in areas such as education and health.

You recently met with Bahrain Chamber of Commerce and Industry chairman Sameer Nass to discuss preparations for a business forum on investment opportunities in Egypt. Can you tell us more about this?
It was our first meeting and it was fruitful. We agreed that we [as the two countries’ business communities] need to have a mutual effort to get to know each other more. I think the investment sector in Bahrain should hear about small investment opportunities as well as mega projects. The seminar will be organised by the embassy, Bahrain Chamber of Commerce and Industry and one of the Bahraini banks working in Egypt and will include the new cabinet minister responsible for investment, the president of the Egyptian Authority for Investments. Our discussions were about this and also about doing a forum in Bahrain.

Also we will organise, in cooperation with the chamber, visits of five to eight people from both Bahrain and Egypt who are serious about doing business in the two countries.

Are there any cultural visits planned? (virus permitting)
Yes, many as the embassy has good relations with the Bahrain authorities and Shaikha Mai. We want to change a little the way of introducing Egyptian culture. My intention is to bring new shows for example modern art, actors and dancers. There are plans for Egyptian theatre to perform King Lear and we’re also discussing an exhibition of Egyptian antiquities that have never been to the Gulf before – that’s especially thanks to Shaikha Mai. Also, I hope to have the Egyptian National Football Team, including Mo Salah, visiting. If we can get two of these in 2020, it will be an achievement.