Health Care for the Future 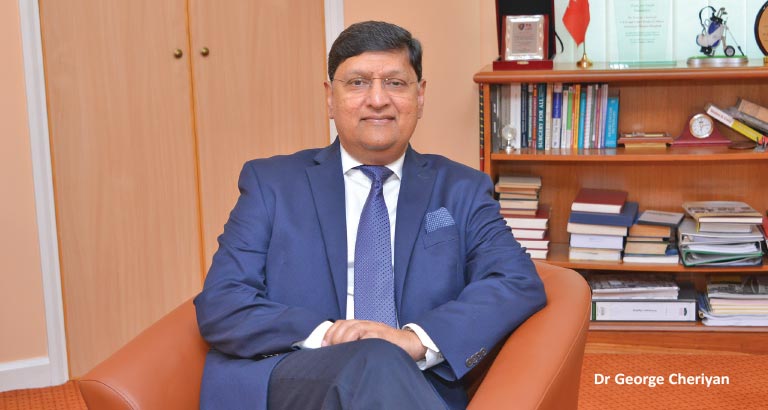 Dr George Cheriyan explains how the American Mission Hospital will be at the forefront of shaping the future of healthcare in the Kingdom.

More than a century after having literally broken new ground by becoming the first modern hospital in Bahrain, the American Mission Hospital (AMH) is poised to take the lead again in the shift towards the future concept of healthcare provision.
“We work very closely with the Ministry of Health, the Supreme Council of Health and the National Health Regulatory Authority in providing solutions to healthcare challenges,” says Dr George Cheriyan, AMH’s corporate chief executive officer and chief medical officer. A neonatologist, who spent 18 years working with Saudi Aramco, he has headed AMH since 2009 and overseen a quite dramatic expansion of both physical facilities and community outreach programmes during his nine-year tenure.
With three purpose-built clinics – in Saar, Amwaj Islands and, more recently, Riffa – both supporting, and taking the load off, the hospital’s iconic headquarters in Manama, Dr Cheriyan believes the AMH’s ability to evolve with the times has enabled it to be extremely well prepared for the change that is about to occur in how healthcare is provided to the Kingdom’s citizens. “We have built on the legacy of our past,” he says. “We are creating truly futuristic healthcare through collaborations with other big institutions so that we can significantly enhance our capability of delivering a much higher quality of care.”
He explains that a seismic shift has been occurring not just in Bahrain but the GCC countries, with the payer model in health care shifting to the insurance model, and the government is setting up a social insurance fund. “AMH is readying itself for the change that will occur over the next two years,” he says. “What AMH is doing in Bahrain – and which we’ve done over the last one hundred years – is to essentially partner the government and to complement what the government wants in terms of providing the most optimal care to the people of Bahrain.”
The first step towards achieving that level of preparedness has been the setting up of an IT platform that seamlessly transports information from the main platform to the subsidiaries. “IT is going to play a big role in creating these systems and augmented AI is going to play a big role in allowing physicians to get better decision support to treat patients,” Dr Cheriyan points out.
“Since tele-medicine, tele-radiology and IT-based apps are going to be significant players in the future of healthcare, AMH is investing heavily into upgrading our IT systems,” he says. “We are close to being paperless in our electronic healthcare records and we will be totally paperless in the next 12 months. All our four centres are IT-linked with each other, as well as our offices in the US, enabling every exchange of information, especially through videoconferencing facilities, to take place in real time.”
Now, as AMH prepares itself for the next stage in its evolution, Dr Cheriyan, a strong proponent of home-based and ambulatory services, stresses that the future concept of healthcare provision is to be more focused on preventive measures and to keep the general population healthy.
“The shift is from sickness care to wellness care,” he says. “The focus is on keeping people healthy.”

AMH is readying itself for the change that will occur over the next two years.”