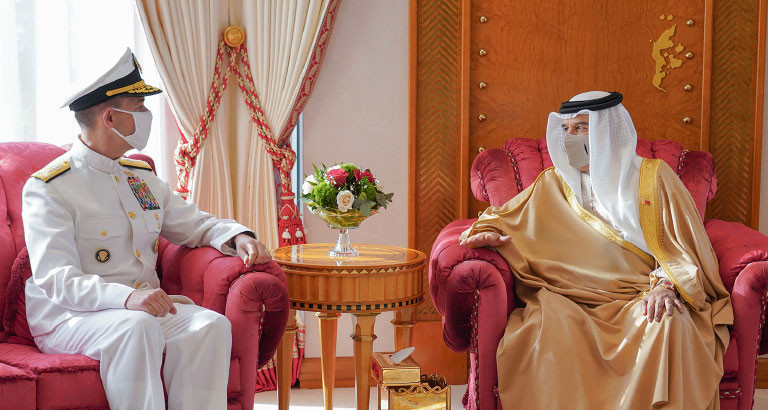 The United States Navy’s Fifth Fleet has been headquartered in the Kingdom of Bahrain for several decades. The fleet’s commander, VADM Brad Cooper, is also at the helm of two large coalitions: the Combined Maritime Force (CMF) and International Maritime Security Construct (IMSC). In this conversation with Bahrain This Month, he gives us some insight into the fleet’s priorities, their role in intercepting drugs and weapons in the region, and gives us a peek into his life too.

Can you give us an overview of Fifth Fleet’s mission? What have been your priorities as commander here?
Just to give you a little context on why we’re focused on this region, it’s a big maritime region covering 8,000 kms. from the Suez Canal all the way around the Arabian Peninsula into the North Arabia Gulf. It’s a vast amount of water, and through these waters flow 20 percent of the world’s oil. I think we would all agree that this region, literally and figuratively fuels the world. So, ensuring maritime stability is important; and that’s our responsibility. We focus on maritime security through deterrence and maintaining the ability to respond should something happen.

We believe the best way to meet that is by strengthening our partnerships and accelerating innovation, which are really at the heart and soul of everything that we’re doing here. We’re fortunate to have two very large coalitions here that I command: the Combined Maritime Force (CMF), a 34 member-nation maritime force which is the largest in the world, and the International Maritime Security Construct (IMSC) which is an 11-nation maritime force.

Can you tell us about ‘Digital Horizon’ which was recently launched here in Bahrain?
Digital Horizon is what I would call the next step in a series of steps that we’ve taken to accelerate innovation. One of the important aspects of our efforts to bring unmanned and artificial intelligence together has been the speed at which we’ve been able to do it. We’ve been moving very quickly using a model that I characterise as ‘factory to fleet’ - the latest and greatest that the world has to offer; let’s bring it to the region and operate it and see how it works. It’s a tough region to operate in from a climate perspective and long distances. So, if it works here, it can probably work anywhere else.

About six months ago, we worked with a number of organisations in the Department of Defense, and asked for the latest and greatest around the world in unmanned systems and artificial intelligence over time. That got necked down and today we’re working with 17 industry partners who have 15 platforms here, 10 of which are here for this event for the first time. As I look to the future, we’ll take lessons from this as well as operational lessons and apply them in a meaningful way. 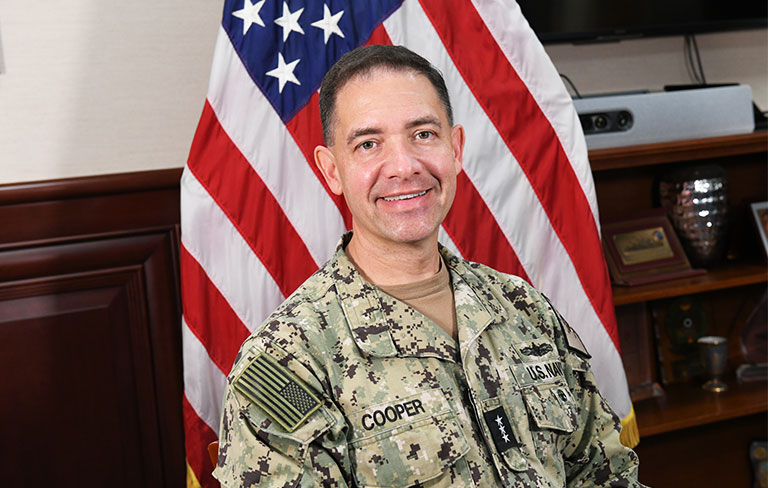 What do you believe sets the U.S. Navy’s relationship with Bahrain apart from other relationships you have in the region?
I think it is a very unique arrangement here, which starts with a decades long strategic relationship between the United States and the Kingdom of Bahrain. it includes decades of working shoulder to shoulder and in very unique ways. Let me just talk about a couple of them; the first being the willingness of both His Majesty King Hamad and His Royal Highness the Crown Prince and Prime Minister to host these two very large coalitions, which set the conditions for all our operations and partnerships in the region.

Then when I take it down to a day-to-day practical point of view, our relationships really are at their best on a people-to-people level here. Even before I moved out here, I’ve probably known hundreds of people who’ve lived in Bahrain – American Navy families. The one thing they all had in common is they love living here. American military families here don’t live on a base, we live out in town.

I’d like to highlight that we look to make Bahrain the number one destination for sailors and their families to be stationed. Last year, this base won the number one base in the entire US Navy out of 68, around the world. This is reflective of the depth of the relationship with Bahrain – it’s deep and has a lot of different aspects to it, all of which are positive.

Can you tell me more about the regional partnerships that have developed over the past year under your leadership?
The region is vast and dynamic so everything has to be done with partners. This points to the importance of the partnerships that we have.

As we look to the future, taking those partnerships and growing them in terms of numbers and capabilities is important. One key area of this is being able to grow our unmanned surface vessel fleet which we’re currently on a trajectory to grow a 100 unmanned surface vessel fleet. By the end of the summer of 2023, about 20 percent of this fleet would be from the United States, and 80 percent would be spread along all the partners in the region.

The US navy recently introduced a pilot, two-year mental healthcare programme. How necessary is this approach for the mental health of personnel deployed in Bahrain?
Mental health is a component of overall health. I’ve somewhat jokingly in the past, although there’s a serious component to this, said that the United States Navy requires you to get your teeth checked twice a year and that we ought to make an investment in your brain in a meaningful way. So, this is really just an opportunity to invest in our sailors and their families in a unique way. This particular pilot programme has been enabled by wonderful outreach and collaboration with facilities out in town and using the facilities that are available out in the community, as well as expanding the number of counselors and mental healthcare providers here on the base.

The US Navy has had great success in intercepting drug smuggling vessels. How significant is the role of the navy in the fight against drugs?
The counter smuggling effort is a key area of focus for us. By the end of this year, I think we will be close to having seized a billion dollars’ worth of illicit narcotics in the previous two years. I think these are meaningful, tangible expressions of the seriousness of our effort. And it’s been heavily partnered with the Combined Maritime Forces at the core of how we’re doing business. Then equally, I think we’ve had successes in countering illicit weapons. Last year, we seized 9,000, weapons, which was three times more than the previous year while this year, through our cooperation with the United Kingdom, they seized motors and motors associated with cruise missiles and ballistic missiles that were heading down to Yemen. Then we saw in the last couple of weeks our interdiction of an explosive-laden dhow that was going to Yemen. These things reflect the seriousness of our focus.

What does living in Bahrain mean to you personally? And do you have family here with you?
I’m here with my wife and have two adult children who live back in the United States. We love living here; it’s been an enriching experience every single day.

What’s a personal leisure activity that you enjoy?
I liked playing basketball in high school. I didn’t play much basketball for about 20 years and started playing it again. I’ve found that it’s a good opportunity to get a little exercise in, get a little thinking time in and show that I still got it! It’s fun.

You have a name which is world famous in Hollywood. Are there any particular stories that you’d like to share with us where that’s concerned?
Having the name Brad Cooper, the same name as the ‘2012 Sexiest Man on the Planet’, is not an easy name to live up to. I had a job about 10 years ago where I worked very heavily in the private sector and had to give a lot of public speeches. I’m sorry to about the 10,000 women around the world that I disappointed when it was me showing up to speak and not the sexiest man on the planet. No one’s ever complained, but you know, they’ve just … I could see the disappointment.

Finally, what are the long-term plans for the navy here in Bahrain?
First, I think it’s important to point out the United States Navy is not going anywhere. We’re here, we’ve been here for decades, and I anticipate we’re going to be here for decades. And in that path, I think you’ll continue to see us doubling down on expanding and strengthening these core relationships that we have through the multiple coalitions.