Upgrades in Trade and Facilities 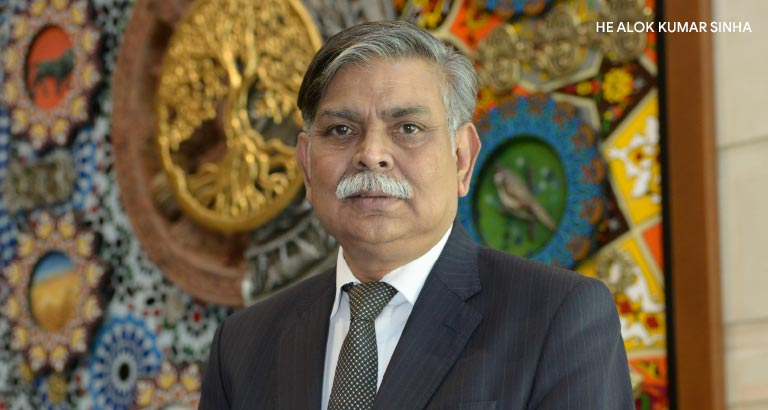 Indian Ambassador, HE Alok Kumar Sinha, tells us about trade growth and life at the embassy.

You have now been in the new embassy building for a year, how are you finding it and what has been the benefit for the local Indian community?
The new embassy is 3,810sq/m and thus quite spacious for providing effective and efficient services to Indian nationals. The relationship between India and Bahrain goes beyond the usual political or economics, the embassy complex reflects the civilisational connect. The Chancery seats 200 and comprises a state-of-the-art, spacious consular hall with disabled access, token machines and a TV. The trade centre has facilitated the organisation of trade/investment promotional events as well as responding to queries and resolving trade-related complaints.

There is also a multipurpose hall with sound system, projector and stage. And the landscaped courtyard also has an open theatre area. In the past year, many cultural programmes have been organised in the embassy. The Chancery also has a library which is open to all.

There are provisions for future expansion of the embassy in terms of increasing the number of officials to meet the needs of the increasing number of Indian expatriates in Bahrain.

Earlier this year it was reported that trade between India and Bahrain had increased significantly with a jump estimated at around 40 per cent between April 2018 and February 2019. Can you clarify these figures? To what do you attribute this impressive rise? Are we seeing trade in new products and services or simply an increased uptake?
India-Bahrain bilateral trade for the year 2018-19 reached USD1.282 billion, registering an increase of almost 30 per cent over the previous year. India’s share in Bahrain’s non-oil trade has also increased from 3.5 per cent to 4.3 per cent.  India has become the fifth largest trading partner of Bahrain. There is a significant shift in items exported to Bahrain from traditional items like food stuffs, gems and jewellery etc to an increasing share of automobiles, engineering goods and iron and steel. A large infrastructure project pipeline in Bahrain offers potential for maintaining the increasing trend in our exports.

The consistent rise in bilateral trade over the past years is due to the synergies and complementarities created because of the Indian Government flagship programme Make in India, which has a vision to make India a manufacturing hub, coupled with various reforms undertaken by the Bahraini Government to diversify the country’s economy in non-oil sectors. Bahrain is re-engineering its fiscal model to encourage greater participation by private capital in driving growth. The efforts to curb government spending coinciding with regulatory reforms and a greater willingness to embrace public-private partnership structures; the large project pipeline; the recent discovery of tight oil and deep gas reserves as well as Bahrain’s strategic location as a gateway to the Gulf have all resulted in opportunities for greater economic engagement with the Kingdom.
The creation of a trade centre in the embassy complex has provided an excellent venue for visiting delegations to conduct road shows and thus bridge the information gap about the opportunities available for expanding trade and investments in various sectors.

It has also been reported that India is the largest external investor in Bahrain, what makes the Kingdom such an attractive prospect?
Indian investments have been in sectors like IT, healthcare, pharmaceuticals, real estate and construction, etc. There are significant advantages for foreign investors in Bahrain such as low operating costs, 100-per-cent ownership and availability of skilled expatriates; thus creating a comparative advantage for Bahrain over many other countries in the region. Success stories from Indian businesses in the Kingdom have also contributed towards a consistent increase in Indian investments in Bahrain.

Are you able to say, approximately, how many Indian nationals currently make their home in Bahrain?
Approximately 350,000 Indians are currently staying in Bahrain. The Indian expatriate community is an important anchor of the India-Bahrain bilateral relationship contributing to the development of both countries.

In its role as support to the community, the embassy frequently lays on social, charitable and cultural events. Can you tell us of anything that is planned for the coming months?
The various socio-cultural associations within the Indian community in Bahrain organise year-round various activities which are supported by the embassy. Besides events to mark our Independence Day on August 15, India is celebrating the 150th Birth Anniversary of Mahatma Gandhi and a series of programmes has been planned culminating on October 2. We are also celebrating the 550th Birth Anniversary of Guru Nanak Devji, the founder of the Sikh religion, and a number of activities are being planned in this regard from September to November 2019.

How will you be marking Independence Day at the embassy?
A flag hoisting ceremony will be held in the Embassy complex in the morning. In the evening, the embassy will organise a cultural programme showcasing the heritage of India and the richness of the India-Bahrain relationship.

On a personal note, have you found the move to the new embassy has impacted your working life?
The move has been quite satisfying as the embassy has been able to provide services effectively to visitors due to the availability of our infrastructure.

What are your favourite aspects of the new building?
The exterior curvilinear stone façade and the ornamental gate establishing a strong Indian identity; also, being able to meet the long-standing aspirations of the Indian community adding the requisite infrastructure to meet emerging requirements due to the expanding India-Bahrain ties in diverse spheres.