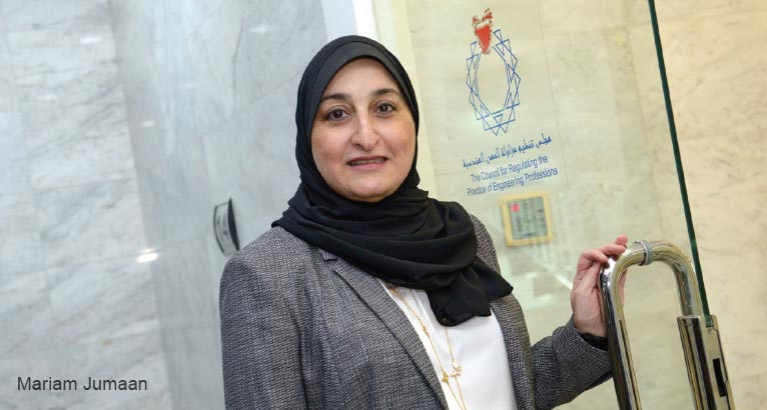 Mariam Jumaan, the newly appointed Chairperson of the Bahrain Council for Regulating the Practice of Engineering Professions (CRPEP), told Bill Grieve about her career journey.

You qualified in engineering back in the 1980s, an unusual field for women at that time. What made you pursue this discipline?
I started my engineering studies in 1977, after receiving a scholarship, and completed a Bachelors and Masters Degree in Electrical Engineering from McGill University in Canada, graduating in 1983. We were a class of 54 with just four females, so even in Canada at the time the number of females in engineering was small. Electrical engineering was the natural choice for me because I loved mathematics and physics.

How were you received by your fellow students at McGill?
We were a tightknit student body, especially because the stresses of engineering studies made us work closely together. I was embraced completely by my peers and I am still in touch, almost 35 years later, with some of the friends I made then.

On returning to Bahrain, you joined the Electricity and Water Authority where you stayed for 25 years moving up the ranks. What do you consider your most important achievements?
I was with EWA for 25 years, the largest part of my career. I started as a graduate engineer and was Director of Planning & Studies when I left in 2008. Probably my biggest achievement was when I led and successfully completed the government side of the project which involved the first private power plant in Bahrain. I was also responsible for planning and developing a lot of the high voltage 220 and 66kV transmission networks on the island.

You’ve also done stints with the EDB and as Undersecretary for Land Transportation and Post. Developing a strategy for public land transportation must have taken a great deal of work. We’ve recently seen the introduction of new bus services and reports of bidding for a new metro service. Please outline some of your works.
When I was at EDB we were responsible for coordinating with government entities to set out their Strategic Initiatives to support the National Economic Strategy and Vision 2030. At the time, I also headed the EDB team coordinating with the Ministry of Housing on the first privatisation project on public housing, and again achieved successful commercial close. On creation of the Ministry of Transport, I was brought in by the new Minister to become Undersecretary for Land Transportation, where I was responsible for all land-related and peripheral support infrastructure.  And, there again, I led the successful completion of the project for appointing a new bus operator. The guidance and support provided by our country’s leadership and also that of the executive management in the ministry gave us the environment and opportunity to achieve and succeed. Attaining the post of Undersecretary was a big achievement for me as it was, at the time, the highest position reached by a female engineer in government.

You have now retired. What prompted this decision?
It was very stressful towards the end and I thought it was time to move on and do the things closer to my heart – and I love engineering; the CRPEP role allows me to continue working in the engineering space.

You have also recently been appointed chairman of the CRPEP. Please tell us about the organisation, its history, membership functions and mission.
The CRPEP is the Council for Regulating the Practice of Engineering Professions. It had its beginnings in 1982 when regulation became necessary. It regulates the engineering field ensuring that all engineering companies and individual engineers are licensed and properly qualified. All practising engineers, whether in the private or public sector, have to be licensed by the Council.

What are your ambitions and intentions for the role moving forward?
I want to make sure we support the engineering community and ensure standards are upheld. We want to ensure the safety of the community by making sure we have appropriately licensed and regulated engineers across the full spectrum. I want to get people to understand the importance of proficient professional qualifications that the engineering community understands and appreciates. I became a Chartered Engineer, and subsequently a Fellow of the IET when that was something not many people knew about or appreciated.