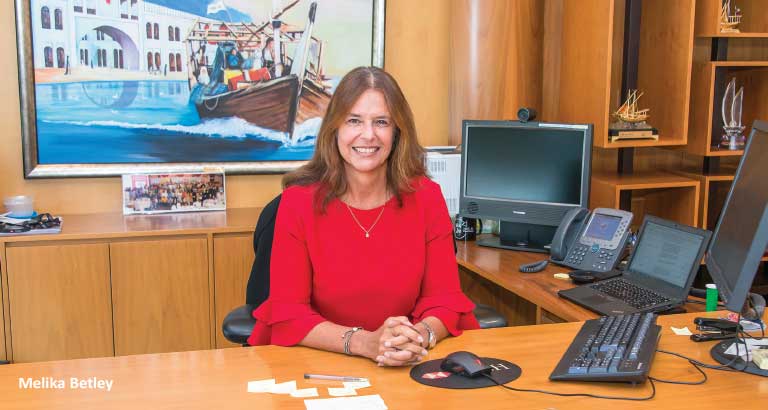 HSBC Bahrain CEO Melika Betley talks about her role and gives a sneak peek into her world of banking.

Having been born in Bahrain, British expat Mel is no stranger to the island. “My parents were expats in the region,” she says. “We moved from here to Lebanon and then went back to the UK when I was seven years old. So, most of my formative years were in the UK.”

A qualified lawyer, Mel joined HSBC in 2000. Of her 18 years tenure with the company, she has spent 12 of those in the Middle East and moved to Bahrain last year. “Primarily my role is to lead the business here – that’s internal leadership – helping staff be the best they can be and provide great service to our customers,” she says. “We’re also here to play a part in the community, and that’s where the leadership also translates externally. So, it’s being the person that’s driving all the different elements forward to maximise our business in Bahrain.”

During her time in the region, Mel has had many different roles, all of which she says have been a learning experience, adding: “My training as a lawyer has really helped me throughout my career. Sometimes I wish I’d moved out of law sooner but I think it really trains your logical thought process, analytics and communication. That stood me in good stead for most of my non-legal roles.”

Mel believes that the region as a whole, including Bahrain, is going through its biggest economic transformation ever. On how private banking institutions, especially HSBC, can help support the economy, she says: “HSBC is the largest international bank globally. One of our core focuses is global trade and a key advantage we offer is the ability to tap into that global network. Therefore, we’re ideally placed to serve the trade needs of Bahrain-based companies, as well as connecting our multinational companies looking to do business in Bahrain.”

Touching briefly on the new oil revenues and whether they will improve the fiscal deficit, she says: “I think the oil and gas discovery should prompt inward investment in itself to help Bahrain capitalise. As and when revenues come on stream, clearly, they will help any fiscal deficit. But in parallel, what is positive is the Kingdom’s reasserted commitment to continued diversification, because ultimately, that’s the goal of all GCC nations – a well-balanced and diversified economy that’s not overly dependent on one source of revenue.”

HSBC has invested about USD6 billion in the last few years in innovative digital products, with HSBC Bahrain recently launching facial recognition, called Face ID for corporates, and Touch ID for retail. “Digitalisation is undoubtedly the way forward for the banking sector, and the key focus is to empower our customers and enable them to do business more easily,” explains Mel. “Globally, HSBC participated in the first distributed ledger [or blockchain] technology-based trade transaction. We’re investing alongside a number of global banks in trying to transform the way we do trade internationally.

“Last year we launched a trade transaction tracker app in Bahrain, enabling our customers to do business more easily and get real-time updates on their transactions. Over the next 12 to 18 months we’ll continue to see improved services and products deployed in Bahrain.”

HSBC has had a presence in the Kingdom for over 70 years and has won the Domestic Global Cash Manager award over consecutive years. So, what’s the secret behind the success? “It’s a number of things,” says Mel.
“We have a great platform called HSBC Net, which enables customers to effectively manage their businesses, liquidity and cash. We also have great people – local, regional and global technical experts who can tailor solutions to our customers’ needs.”

Mel is the first female CEO at HSBC Bahrain and has a team of over 200 staff. With an open door policy, she believes in getting to know them individually, and says spending time with people is one of the best ways to motivate them.

Mel enjoys island life and says: “It’s such a genuine and friendly country and society that you can’t help but feel welcomed here.”

With a love for water and a passion for swimming and diving, Mel has certainly chosen the right place to call home.

Digitalisation is undoubtedly the way forward for the banking sector.”