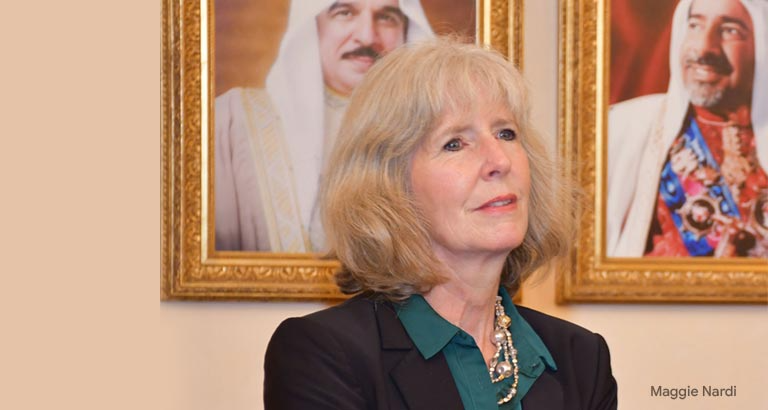 Following the recent U.S. presidential election and signing of the Abraham Accords, George Middleton speaks to the Chargé d’Affaires at the U.S. Embassy in Bahrain, Maggie Nardi.

As Chargé d’Affaires, what do you consider to be your primary focus during your current assignment in Bahrain?
Following the departure of the former ambassador, my priority was taking care of the embassy under COVID circumstances and preparing what I thought would be a typical slate of meetings and events. Subsequently, when the UAE signed the Abraham Accords with Israel, there was a flurry of activity related to that. We started getting a lot of attention and have so far had five cabinet level officials, Department of Energy officials, three White House delegations, and numerous State Department officials as well. We are trying to support Bahrain since it signed the Abraham Accords and to facilitate whatever bilateral agreements come out of that, manage a huge flow of visitors and still try to keep everyone safe. We have also been keeping busy preparing for the transition following the recent presidential election.

Given the recent election results, it is a crucially important period in international affairs. What do you see as being the most likely opportunities and challenges in world affairs over the coming weeks and months?
Much related to that is the administration transition. Many governments around the world are watching and waiting to see what this means. I think our job at the US embassy is to reinforce all of the positive things that are being done by the current administration while ensuring that the new administration has a good understanding of the priorities and concerns of the region.

Are there any high-level delegations or VIP visits planned in the near future; before or after the January inauguration? If so, how will these be managed?
I think efforts to support the implementation of the Abraham Accords will continue if there is a way that the US can help facilitate that. There was obviously the IISS Manama Dialogue which recently wrapped up too, in which we had some participation. COVID and the government transition have limited who is willing to travel at this point, but despite that we had several delegations participate in-person. 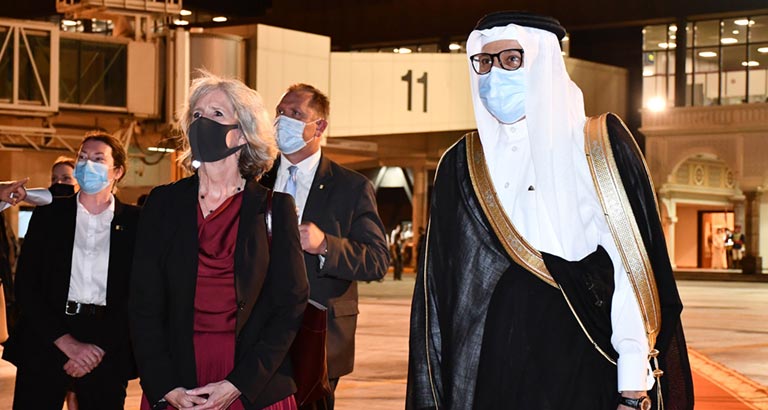 Once the new ambassador is finally announced, will you be leaving soon after?
I came here at the end of August last year as the Deputy Chief of Mission, which is more internally focused than externally focused. That is a three-year tour, so I am not slated to leave till 2022 and will help get the ambassador assimilated when he or she arrives and support them until that time.

How many U.S. citizens are currently residing in the Kingdom? Which sectors are they involved in?
We don’t keep an exact tab, but we have the US Navy command here as well as the US Fifth Fleet. So, we have a sizeable presence there of active duty, military and civilians. There are also Americans working here in manufacturing, oil and gas and other sectors. So, I would say the range is between 15 and 20 thousand.

You spent a two-year posting in Jerusalem as the Director for the International Narcotics and Law Enforcement Affairs programme to the Palestinian Authority. From your experience, how do you see the prospect of trade and personal relations developing between Israel, Bahrain and the Palestinian Authority?
The one thing that I would say about the recent signing of the Abraham Accords is that the leadership here has maintained in every public remark that the Palestinian issue and the idea of a two-state solution  is still a priority for them. It’s not something that’s just set aside. I do believe that they have the potential to play a very positive role in trying to bring the parties together. Obviously, it must begin with the political relationship. As far as economically, there’s a lot of potential in the West Bank, I can certainly say from my time there. But they have to have increased access to basic inputs, including water and electricity, and greater mobility. It’s going to take some compromise on all sides in order to make things work. I am hopeful that Bahrain, and the UAE as well, can positively contribute to this process to move things forward. 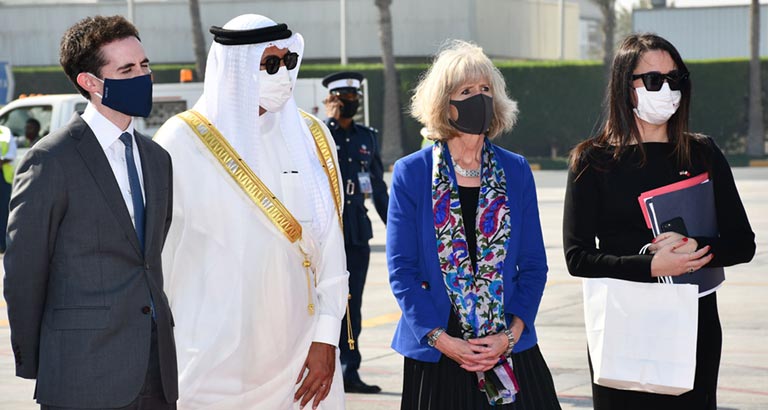 After 25 years working at the U.S. State Department, where was your most memorable posting; and why?
Every posting is memorable for different reasons, many of them due to timing and global events outside of your control. If you just take Bahrain alone, I came here thinking it would be a quiet, calm post ; however, the Ambassador departed, the Abraham Accords were signed and we have a presidential transition. And that’s in only one year - I’m here for three years.

In 2015, I was in Croatia where I was Deputy Chief of Mission, when the refugee flow, which had been going from Turkey to Greece, to Macedonia, Serbia, and Hungary and then up to Western Europe, suddenly turned West and went into Croatia when Hungary shut the border. In literally one night they had a million refugees on the border and it was their main economic artery with the rest of the Balkans. So, we worked very closely with them to open the border and then help them figure out a humane way to register and care for the refugees.

Given the current state of the pandemic across the world, are there any challenges that US citizens in Bahrain have been facing? How does the embassy support these citizens?
I would say that American citizens who are in Bahrain should count themselves very lucky, because this is quite definitely one of the better places to be. I have to give His Royal Highness the Crown Prince and Prime Minister a great deal of credit for recognizing, well before many other leaders and countries, that this was going to be a serious problem for a long time and for taking the steps that he did.

As far as what we did and continue to do for the Americans, there was a period of time when we had to stop our in-person consular services, because it was too dangerous to allow people coming into a very small waiting room so we stayed connected with them by phone and email. We always fulfilled any emergency services - if someone had to travel for a family crisis, we would do emergency passports or other emergency services. We updated citizens online regularly regarding changes to travel protocols and also had a virtual town hall to introduce our new consul, talk about voting abroad and give them updates on the COVID situation. So, we have tried to remain as connected as possible to the community, but on a virtual basis. 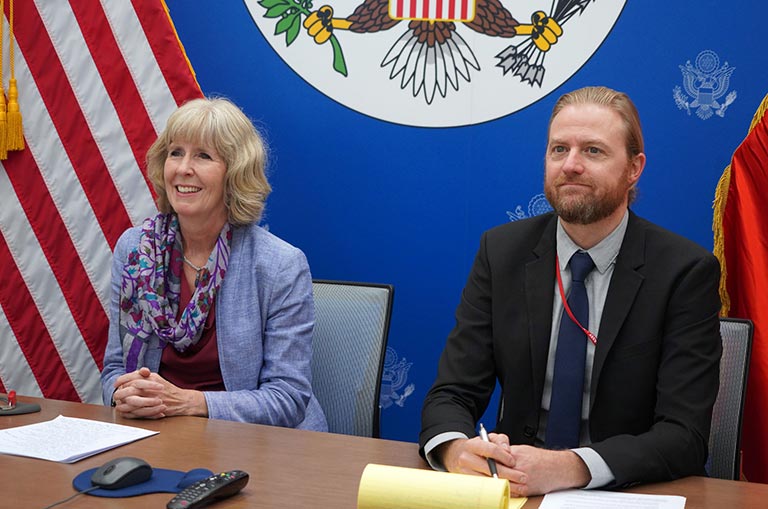 Do you have any advice for US citizens who would perhaps want to travel during the festive season?
We don’t control what US citizens do, but we can advise them of all of the requirements, whether it’s testing, limitations for travel to the US from here or to other places, and we try to keep them as up-to-date as possible. So, we just give the same advice that we do to all of our staff: wear your mask, socially distance and do things virtually whenever possible.

Is your family with you on this posting?
We’re usually a divided family so we’re currently doing everything virtually- on a family and professional basis too. My husband is in Virginia because he can’t work from here with the seven to eight-hour time difference. My daughter is in Virginia studying at a university while my son is in high school here along with me and our dog.

What do you do for recreation and leisure in Bahrain?
I really enjoy, particularly after having been in Jerusalem, archeology and ancient history. So, I like to visit the burial grounds, Saar historic sites and Bahrain museum whenever I can. I also run, and given that the terrain is nice and relatively flat, that has been easier although the heat has been more of a challenge for me. I’m game to try a lot of different things so have experimented with horseback riding and paddle boarding too.