The Kingdom of Bahrain has high hopes in its Tokyo 2020 Paralympics participation, relying on veteran Paralympic medallist Ahmed Abbas Meshaima, who is competing in the Javelin F38 category.

In an interview with Bahrain This Month, Ahmed confirmed that he is determined to make a strong comeback in the event, taking place from August 24 to September 5 this year, after personal reasons deprived him from partaking in the previous games held in Rio de Janeiro in 2016, despite being qualified.

Ahmed has been representing the Kingdom in different para-athletic events for 23 years and mainly excels in shotput throw. The father of three won an Olympic medal for Bahrain in shotput during the 2004 Athens Paralympics, as well as several other titles such as the Asian Championship, the GCC Championship, the Pan-Arab Championship and more.

However, Ahmed told us that he is competing this year in javelin as his prime game; shotput, his claim to fame, has been eliminated by the organisers of the Tokyo 2020 Paralympics. “The number of games has been reduced at this year’s edition of the Paralympics and shotput was eliminated. It has been my strong point throughout my career,” says Ahmed.

“However, I am keen on making a bold statement and representing my country well in the games. Therefore, I will be taking this new challenge to compete in javelin for the first time on such a global scale. My performance in this game is rapidly improving and I am hoping to succeed in achieving a spot for Bahrain on the podium,” Ahmed said.

The seasoned thrower also said that he had participated in several continental and international competitions during the past two decades, adding that the pressure of competing in the Olympics is different. “I have to perform as best as I can before the world and portray a good image about the Bahraini disabled sports movement,” he says. 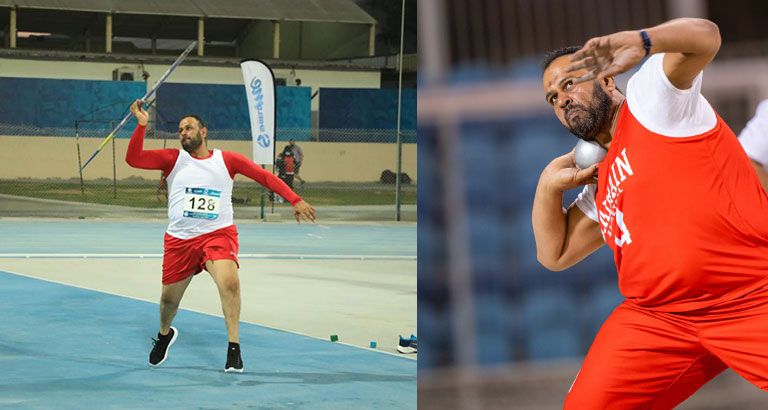 Speaking more about the details of his preparations for the Tokyo journey, Ahmed states that he has been training five days a week throughout the last couple of months, which included several closure decisions of sports facilities as part of the efforts exerted to combat the spread of COVID-19.  However, Ahmed’s determination could not be stopped as his request to provide him with the necessary equipment at his house was fulfilled by the officials at Bahrain Paralympic Committee (BPC), which he thanked for its generous sponsorship and support to athletes with determination.

“I’d like for people with determination to realise that being involved in physical sports activity has many benefits. It has been proved that sports contribute to the improvement of some disabilities and prevent the possible deterioration of some conditions. It also has a positive impact on the psychological health and makes a valuable addition to individuals’ social lives, by meeting and engaging with people with similar conditions to theirs.”

Ahmed along with his teammate, Rooba Al Omari, are set travel to Tokyo on August 19, bearing the responsibility to honourably represent Bahrain in the Paralympics and show their best performance to the world.
“Some may believe that it is a tough task for people with determination to be able to defy obstacles and excel in sports. This might be true, but with abundant support and strong determination, it is possible. My main motivation has been my family since the very beginning. I am cheered on and supported by my seven-year-old daughter today with the same momentum I was motivated to give my best by my late father since 1998,” he concludes.