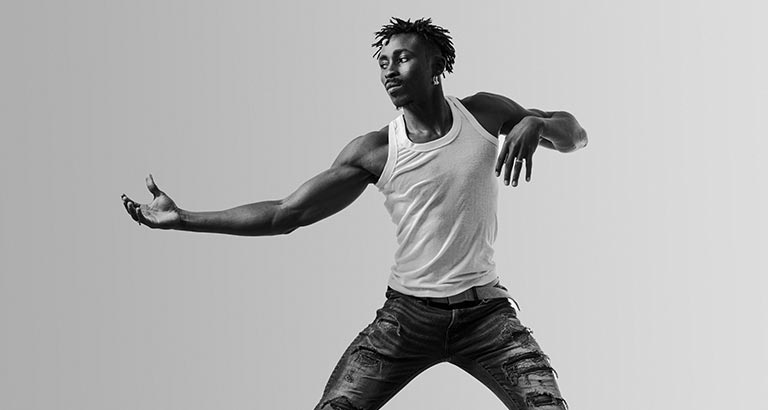 Music has long been known to be an international language that is capable of inspiring change. Bahrain-based burkinabè musician Bino.Bah has a conversation with Farah Baig, about his will to bring about positive change through his music.

The Kingdom of Bahrain has a long-standing history of welcoming people of all cultures and religions to its shores. The island has proven be a safe haven for every community, with its welcoming nature and diverse society proving to be a source of inspiration for many. The result is a melting pot of creatives including musicians and artists that find Bahrain to be a creative muse of sorts.

Last month, Alliance Francaise Bahrain held an event to celebrate the French language while acknowledging and celebrating cultural differences between French-speaking countries. Ahead of the event, we met with Moussa Kouasso Badolo, better known by his stage name Bino.Bah, a talented musician hailing from the West African country of Burkina Faso who would be representing his country.

Where It All Started
Recounting his journey as a musician, the young burkinabè shares that his childhood was marked by the daily harsh realities of Africa, which propelled him towards an untypical course for an artist. “I have been immersed in music since I was just a child, starting my musical journey at church when I was six. Over the years, I attended several musical and vocal development workshops through the church which developed my skills as a musician,” explains Bino.Bah.

“Professionally, I dreamed of becoming a doctor and was attending scientific studies but had to give up on this dream,” he says gently.

In 2010, Bino enrolled in the police academy where he ultimately moved towards Sports, Arts and Culture of the Police – a step that would lead to him being an established musician in his native land. “I had reestablished the police orchestra and filmed educational music videos for civilians to encourage civism and raise awareness,” he explains.

Bino.Bah’s love for music found him delving into a range of genres that were supported by his African roots. “However, being a musician at heart, I decided to go on leave for two years so I may travel the world, meet more people and broaden my horizons. Music is my life and so I had to go,” he quips.

New Beginnings
Having first visited Bahrain in November 2019, Bino was moved by the warm welcome of the Bahraini people and soon found the inspiration for his first solo album, AURORE, which translates to ‘sunrise’ – an album which would signify the ray of hope and renewal presented by every morning. “When I visited the Kingdom, I felt a deep connection with it… and I’m not just saying that because I now live here. It’s peaceful and you form a bond with everyone you meet. It’s safe, you do not find people fighting and it’s just one of those places that you could hear plenty about but ultimately have to experience for yourself to truly understand it,” he elaborates.

Since establishing himself in the Kingdom, Bino.Bah has performed at the outdoor venue Wagalag among others to crowds that have grown to enjoy his music, which is quite new to Bahrain. “The genres covered in my album include blues, African blues, reggae and Afro Mandingue – an unusually peaceful and healing genre of music which originated in Mali,” he states.

Addressing Tough Topics
While pursuing his passion for music has proved to be fulfilling, the burkinabè singer, guitarist and composer highlights that he is on a mission to raise awareness about his country and pressing societal issues. “The inspiration for my music comes from my daily life – problems that we deal with, conversations that we have and real issues that have to be brought to light,” he says. 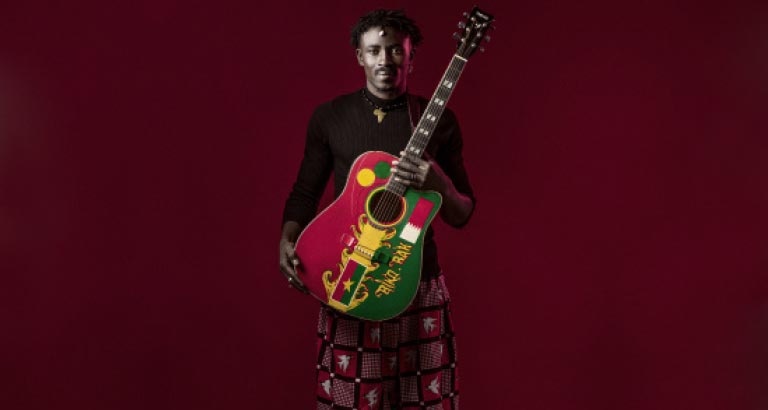 Most people would find the topics that Bino addresses in his music to be uncomfortable, or perhaps unapproachable. “I sing about social injustice, access to education, female genital mutilation (FMCG), respect of family values, the agricultural decline and the survival of farmers. All around the world, farmers are some of the least appreciated and poorest of people, but this is abnormal as they are literally feeding the planet. How can we not appreciate them?” he says, adding that 80 percent of the population in Burkina Faso is engaged in agriculture.

“In addition, I believe that awareness has to be raised regarding FMCG as it is a real problem in my country. Young girls are put at the risk of disease, are unable to have children or have problems when giving birth due to the practice. And, of course, it has a psychological impact and touches the integrity of these girls. It has to be alleviated and every African musician must address the issue,” he stresses.

His poetic compositions also address children’s right to an education. His commitment to the cause is reflected in his hometown where he plays a pivotal role through scholarships for underprivileged children and initiatives to prevent the spread of COVID-19. “Poverty affects the youth who are unable to go to school at times, but whether a child is rich or poor, they deserve to be given access to education. 80 percent of people in Burkina Faso cannot read or write and this must change as they are gifted,” he says.

“It’s important to bring a vision of hope to these people because life is difficult there and I intend to add value to them and have them be recognised on a global scale. They need hope,” he says.

A Voice for the People
While societal issues are the beating heart of his music, Bino.Bah also intends to raise awareness about Burkina Faso on a large scale. “This is why I am proud to represent my country through this event in Bahrain and intend to do so to the best of my abilities and with dignity. I want people to learn more about it and understand how gifted its people are,” he says.

Burkina Faso is known to be the capital of African cinema and hosts large culture and handicrafts festivals annually which are attended by international visitors. “Most people may not know this, but my people are very gifted with their hands. In fact, we have a festival to highlight their craftsmanship which includes unique bronze statues,” he says.

Bino Bah, a victor of change, hopes to inspire change and promote peace through his music. “People must avoid discrimination at all costs. It is rampant, but with discrimination people are denied well deserved opportunities and we can never experience true peace. The differences are only aesthetic; people need to notice the similarities and work towards togetherness,” he concludes.

Bino Bah hopes to perform at more events across the island to raise awareness for his causes and educate the masses on the talents of the burkinabè. If you would like to learn more about Bino.bah, follow him on Instagram using the handle @bino.bah_officiel.