Meet The Musician Playing Pop Songs On His Oud 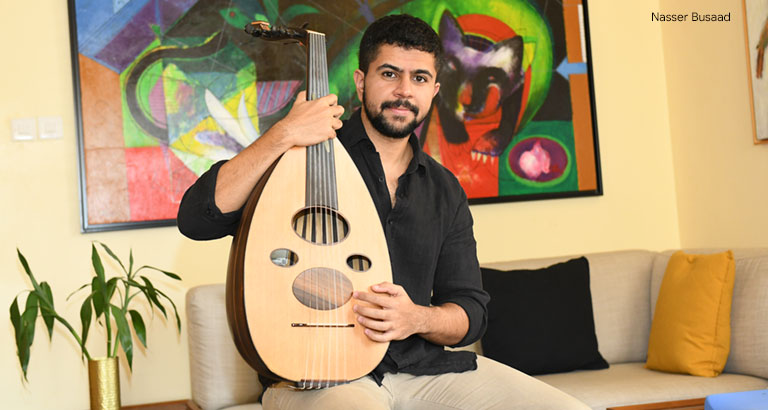 Nasser Busaad has captured our attention (and hearts) by using the traditional oud to play modern day pop songs and theme songs from popular TV shows. In fact, his mesmerising renditions have enabled him to amass a huge following on social media. As we celebrate Bahrain National Day this month, Farrah Saville chatted with Nasser about how he keeps this traditional instrument alive while remaining contemporary.

With over 10,000 followers, Nasser Busaad has clearly grown to be a favourite in the Kingdom of Bahrain. When asked who he is, he graciously answers: “I’m simply a musician who enjoys sharing his music with the world.”

Yet his renditions are far from simple for Nasser has managed to create unique covers for tunes as popular as Michael Bublé’s Sway, CKay’s Love Nwantiti and more. “My interest in the oud came from my dad. Ever since I was young, the instrument was basically available everywhere we would sit. It definitely played a vital role in my upbringing,” he reminisces.

The oud is one of those few musical instruments, which have succeeded in retaining its originality even in the modern age without becoming obsolete. “I highly support the statement that music can help preserve culture and traditions and wish we had more attention towards it. Oud as an instrument carries culture and tradition that goes back in history for thousands of years; its unique shape and sound plays a solid role in our identity as Middle Easterners, which makes it a highly favourable instrument for us,” he says.
While Nasser believes that the oud pairs with a lot of instruments, he sometimes enjoys playing it with percussion. “Other instruments do not have the same presence as the oud does when it comes to that. Another unique thing about the oud is that it’s a fretless instrument which gives you the ability to express freely with no constraints,” he says.

Pop culture has definitely had an influence on Nasser’s music, as the majority of his covers are considered to be a fusion of different genres. “Anything with an interesting tune inspires me to come up with something, whether it is improvising or just playing along,” he says.

“The results of many of the covers that I have made have been pleasing to me. I would have to say, thought, that one cover which stood out was Hotel California’s solo, I remember just listening to it for the first time and my flow was on point with it. It took me less than a day to record it and the way the tune came up was so natural to me,” he adds.

Nasser recently took part in the programme led by His Highness Shaikh Khalid bin Hamad Al Khalifa, HHSK Initiatives, which focuses on youth and community development.  “It was a great experience, something definitely out of my comfort zone but I always try to push myself out of it whenever I get too comfortable. It was a nice peek into how the media world works and how things are done when creating something of that level. It was exhausting and required a high level of commitment, but the results and experiences were worth it,” he says.

While Nasser is a phenomenal musician, he does in fact work full time but still manages to find time to craft his passion. “It’s hard for sure, but my love for the instrument keeps me bound to it. I always have an oud available next to me at home and I would just play whenever I feel like it. I don’t set a specific time to practice, I try to fit it in whenever I can because I have other hobbies and priorities that I focus on as well.” 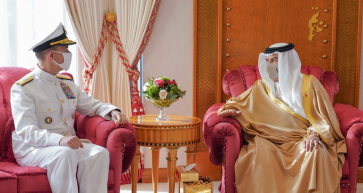