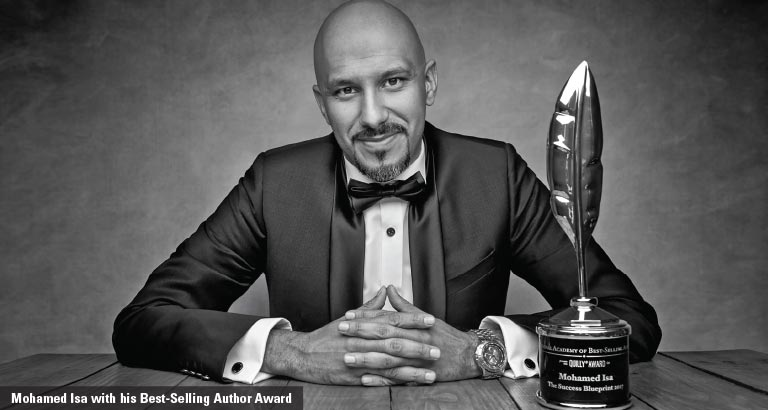 “Many people think that I was born with a golden spoon in my mouth,” says the award-winning writer, who has published books such as The Big Question, with US TV and radio host Larry King, and The Success Blueprint, with Canadian-American motivational public speaker and self-development author, Brian Tracy, among others.
“But, that’s not the case. I was born with strong hands and a strong will.”

He adds: “Many people also think I was born a speaker. Again, not true. I had a terrible experience when I was forced to give a speech in public, I arrived at an event and a paper was thrust into my hands and I was told ‘You have to do it’. My family was in the audience and I knew I wasn’t doing well. It was the most horrifying thing. Later, I sat next to my uncle and he said: ‘You brought shame on the family, can’t you read?’ I was 13 years old and vowed I would never speak in public again!”

And, true to his word, the teenage Mohamed avoided the spotlight declining all attempts to get him on stage throughout his high school years.

“But, when I reached university, I realised that being able to give speeches is important for success,” he says. So, he began to educate himself, saving his pocket money to buy books on psychology and public speaking and volunteering in what he saw as “my platform to go out into the world”. He also volunteered to cover the university’s counselling office and one day the director called him in and told him of an opportunity with multi-national giant Unilever. The only draw back being that he would need to live in Jeddah.

Smiling, he comments: “I said I didn’t much fancy moving to Jeddah but the counsellor told me, ‘you will stay in a five-star hotel and get a salary of BD1,200’ – I decided to give it a go!”

There were 800 applicants for eight places and Mohammed was chosen, one of only three Bahrainis to take up a place. Much to his delight, he was actually sent to work in Dubai, though he did later make the move to Jeddah.

He says: “It was a great journey and that was how come I moved back to Bahrain to another company and became the youngest chief financial officer in the Gulf, at just 26.”

That position involved everything from preparing for the company’s initial public offering (IPO) and stock exchange listing to raising capital and debt. “When I started there, the company’s assets were USD66 million, and four years after my joining, that had risen to USD428 million,” says Mohamed.

But, not one to rest on his laurels, he wanted more. He explains: “I could have stayed as CFO, I had a very nice life, but on December 2, 2015, I left the company to follow my passions of speaking, writing and travel.”
Since then, he has done just that. A fiercely committed coach and speaker, he helps executives and their teams to increase sales and productivity. He speaks both as a motivator and as a trainer and creates collaborative books in which he and other acknowledged experts share their knowledge and advice.

Topics covered are: customer service excellence – which is dealt with in his book Chai Karak ­– A Customer Service Story. How to be a world-class speaker – Mohamed is certified by champion speaker Craig Valentine and has co-authored a best-selling book on the subject. The secret to sales, profit maximisation and employee engagement, as discussed in The Success Blueprint. And he is in the process of adding start-up business practices to his repertoire, in line with his soon-to-be-launched latest book.

And, just for good measure, he is also the Middle East’s only ITMI Certified Tour Director, taking groups to Europe and beyond. He explains: “I love to travel, I love to interact with people; this is the perfect way for me to do both. I’m trying to have fun with my life. I hate to be confined and this allows me to do my own thing.”
It’s a busy life, but Mohamed adds: “People often ask me, ‘doesn’t it cause a problem doing so many different things?’ but I tell them, if I can manage them all, then why should I choose. I will have multiple projects in hand and I say to myself that, from today, I have 20 tasks to be completed in 100 days.”

One of those tasks is to complete work on a new book on start-ups, which will be launched in May 2019. He explains: “There is the argument of why another book on start-ups? There are so many of them. But this features local start-ups, it brings local experience to the table so it will be useful for those who are looking to launch in this market.”

He has just launched something new – the 1,000 Authors Mission – a project to involve people who would like to be published, but don’t know how. “I want to create a series of collaborative books, across a range of fields,” he says. “Being published is something many people dream of; it gives them a chance to talk about their achievements and offer insights to others. I’ll be looking to businesspeople in Bahrain and beyond to create collaborations and professional networks – when you become part of a collaborative book, you automatically have a connection and an introduction to others who are also included.” He aims for each book to have 36 co-authors and the undertaking will be a long-term project over several years.

He is also planning a publication of women’s success stories as a follow-on from a documentary he took part in back in 2005 with a US director.

There’s a follow-up to his earlier book Chai Karak – A Customer Service Story, which was inspired by appalling customer service from a bank and is a mine of great information for bosses on how not to do customer service! Karak Express will give the same insights on sales – to produce it Mohamed researched 1,836 resources to find 247 insights! “The idea is that managers will read it and then go talk about it with their team to improve service,” says Mohamed. Later will come Karak Break.

Achievements
In August last year Mohamed wrote on his Instagram account @mohamedisa3ds that he had recently passed 1,000 days since leaving his CFO position. In that time, amongst other things, he had: delivered more than 60 speeches around the globe, including one at Googleplex in California; written almost 30 thought-leadership articles; co-authored two Amazon best-sellers, with Larry King and Brian Tracy; published Chai Karak;  consulted widely across several industries; zip-lined from an 11-storey building; slid down a 450-metre office building; climbed the Atlas Mountains; and paraglided from 2,000 metres.

He concluded the post by saying “What’s next? I see unlimited possibilities…”

Many people think that I was born with a golden spoon in my mouth.”