More Than 100 Years of Friendship 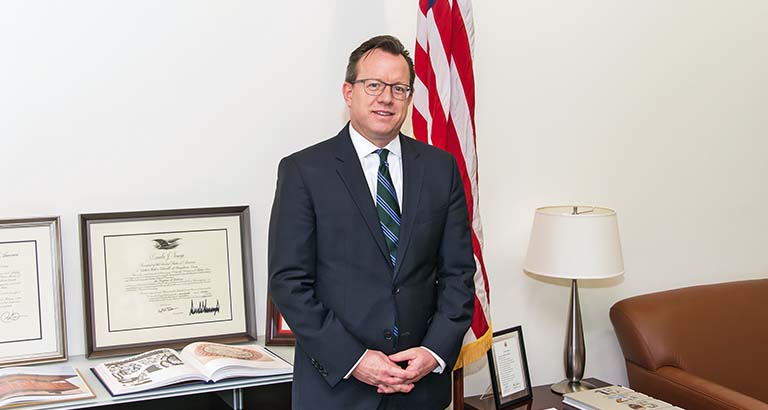 New US Ambassador HE Justin Siberell tells Liz O’Reilly that bilateral relations are as strong as ever.

Ambassador Siberell took up his post in early November last year but was quickly back in Washington DC for the visit by His Royal Highness Prince Salman bin Hamad Al Khalifa, the Crown Prince, which His Excellency says was “an honour and a great way to get started”.

His Excellency is no stranger to the Middle East, having served in Baghdad, Jordan, Egypt and, most recently, Dubai – where he earlier met his wife. He had previously visited Bahrain and this is his first ambassadorial posting.

He is an Arabic speaker, having studied through the US State Department, and he has been interested in the Gulf region since his first posting to Dubai in 1995 saying: “I was deeply compelled by the issues, culture and history you sense here.

“I think, as a US diplomat, this part of the world is one in which are combined important matters of national security – it’s a strategic region for the United States. What happens here impacts the world. It is also an east and west crossroads. That’s fascinating on a personal level and has strategic implications that make diplomacy very important. I will always be interested on all levels.”

Prior to his Bahrain posting, His Excellency served as the coordinator for counterterrorism at the US Department of State from 2012 and he feels this is helpful in his current role, saying: “Terrorism as a global phenomenon is a challenge and affliction that every country is dealing with. Confronting it requires international collaboration and cooperation. That experience is extremely relevant to the work we’re doing in the region.

“My time [at the State Department] coincided with the rise of Islamic State and our effort to build a 70 country coalition to defeat it. It is among the most consequential challenges we face.

“Bahrain itself has been a victim of terrorism and we work closely with the government of Bahrain to address threats to our shared security.”

The Ambassador says his primary ambition for his time in the Kingdom is to strengthen the already close bonds enjoyed by Bahrain and the US people. He says: “I take direction from our leadership and my job is made easier by the commitment of President Trump to the Gulf. His first trip for example – typically, presidents visit our close neighbours like Canada or Mexico, but President Trump’s first trip outside the US was to Riyadh, a clear indication of the importance we place on the Gulf region. So, my direction is quite clear and the commitment of the leaders of both countries is clear.”

And, on the strong bilateral relations, His Excellency explains: “We promote cultural exchange as a way to strengthen people-to-people ties – we have an author here at the moment working with Bahraini writers, and we will also be participating again in the Spring of Culture. Culture is an area where there are lots of opportunities to strengthen ties.

“The Bahraini government is also working hard to deepen cultural ties. It has recently sponsored art exhibitions in the US and I think it’s an area of real opportunity. There are hundreds of Bahraini students in the US at any given time – that provides a springboard for deeper understanding.

“The US community here is very well looked after by the Bahraini government and people. Our interaction goes back more than 100 years with the founding of the American Mission Hospital and since that time Americans have found an extraordinarily welcoming environment here.”

There are around 17,000 Americans in the Kingdom and bilateral trade currently stands at around USD1.7billion. A free trade agreement between the two nations came into force in 2006 and His Excellency says: “Bahrain serves as a gateway to the region for US businesses. Trade has really surged since the signing of the free trade agreement and it’s an area where we see real opportunities. There’s more to be done, making sure both sides know how to take advantage of the opportunities the agreement provides. We are working closely with the Bahraini government to understand the direction in which the economy is moving and ensuring that American businesses that are represented in the sectors that are being emphasised.”

Recent developments have included agreements for US involvement in modernisation works at the Bapco refinery and Alba, which were highlighted when the Crown Prince was in the US. The visit also saw the announcement of Bahrain’s purchase of Boeing F16 fighter aircraft worth USD3 billion.

The Ambassador adds: “More recently we’ve had the Amazon Web Services opening, the expansion of the Mondelez biscuit factory [which makes Oreos] to take on production for the whole GCC, and we may see more.

“We’re looking at the Bahrain government’s strategies on IT, logistics, transport, tourism and petrochemicals – these are all areas we think US companies are well placed to participate in – power generation as well.  And there are opportunities in renewables, particularly solar. Petra Engineering has a solar field test base here in Bahrain already.

“Overall, I feel fortunate to be posted to Bahrain at this specific moment in history, with the opportunity to take the already-strong relationship between our two countries to new heights.”