The Voice of Bahrain 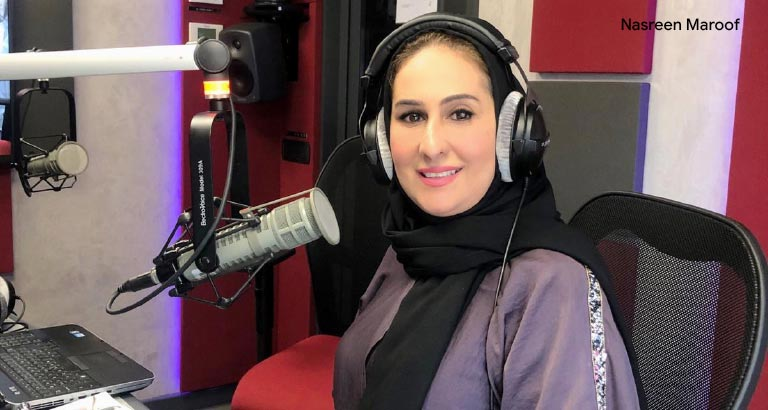 Nasreen Maroof traces her journey from a degree in business to heading Bahrain Radio, under the aegis of the Information Affairs Authority, while sharing her proudest career moments with Behnaz Sanjana.

A fresh business graduate from the University of Bahrain in early 2000, Nasreen was on the job hunt. “There was an announcement by the Ministry of Information in the newspaper, inviting young Bahrainis to a training workshop for various posts in the media,” she says. “Honestly, I was not keen on it but my mum encouraged me, saying that if nothing, it would add value to my resume.”

It’s true when they say that mama knows best, because it clearly set Nasreen on the path to career success. “I participated with the intention of pursuing a career in business once it was over. But, during the workshop, I rediscovered my school-day talent of writing short speeches and being able to talk to an audience,” she remembers.

Before she knew it, Nasreen was offered a presenter and news broadcaster role. It was a time when the radio service aired only one channel in Arabic, broadcasting news, music, and cultural programmes during the day. “I accepted the job and was assigned to co-present the most popular programme – Sabah Elkhair Ya Bahrain (Good Morning Bahrain). It was the most coveted show amongst the presenters, also the most challenging. The daily live show started early in the morning, aiming to connect the public with various ministries to voice their concerns over issues that needed urgent attention,” says the seasoned professional, who also read the news and presented shows covering cultural and political issues, such as the parliamentary elections, as well as participated in conferences around the Arab world on behalf of Bahrain Radio.

As time flew, Nasreen’s career trajectory soared and she was made head broadcaster at  the organisation. “Today, I am the Chief of Bahrain Radio, in charge of seven stations, overseeing their general working with the help of my efficient team. Thanks to the Information Affairs Authority, we operate to the highest standards when it comes to quality of the studios and equipment,” she says.

The broadcasting network has played a proactive role in the COVID-19 crisis by interviewing doctors and health care authorities since January. A special committee follows up on the last pandemic-related news and produces up-to-date educational and informative programmes for the public.

Nasreen shares two of her most memorable career highlights: “The first was when His Majesty, the King of Bahrain, [HM King Hamad bin Isa Al Khalifa] honoured broadcasters and media figures at his court. The second was when I met our beloved Prime Minister, His Highness Prince Khalifa [bin Salman Al Khalifa], and he bestowed on me the title ‘The Voice of Bahrain’.”

Higher responsibilities and accolades have not stopped Nasreen from her greatest passion; that of sitting behind the microphone. She says, “I currently co-host Sabahkim Rayig (Your Elegant Morning) with my colleague, Fayez. After all these years, I still consider the live broadcasting studio my sacred temple. Once the ‘on air’ sign lights up, I still get goosebumps and my soul enters a state of awe.

“Bahrain Radio was and always will be the link between the people and the government. It’s the most popular form of broadcast; accessible even on the go. Such popularity makes us work harder to provide the best. It is my second home and I will always be connected to my audience. I thrive on the feedback of listeners and will always do my best to entertain them. I don’t think my passion to be behind the microphone will ever cease.”