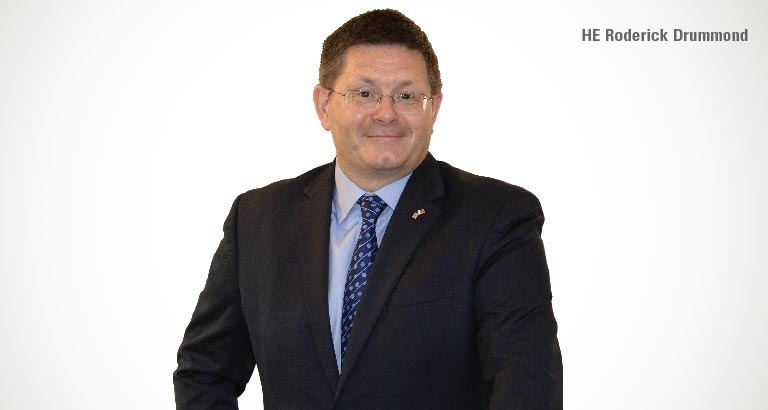 Liz O’Reilly sat down with incoming British Ambassador, His Excellency Roderick Drummond, to learn about the new man at the helm.

Is this your first ambassadorial posting?
I was previously High Commissioner covering Fiji and five other countries and was also Head of Mission for Doha in 2007/8. I’m very excited and delighted at this posting. I know Bahrain and had worked in the region for 16 years, I was previously in Riyadh and visited Bahrain four or five times and have also served in Damascus, Syria, and Amman, Jordan. I’ve been told many positive things about the Kingdom.

Please tell us a bit about your background?
I speak Arabic, studied it with the Foreign Office in Jordan in one of my previous posts where I worked on the full range of Middle East trade and investment plus military and security issues. I have had a full grounding on the kind of issues I am likely to find here.

Your bio shows that you are well acquainted with the region, have you always been interested in the Arab world? If yes, what inspired that interest?

When I joined the Foreign and Commonwealth Office (FCO), I found I had a talent for learning languages and thought that learning Arabic takes you to places that are hugely diverse; from North Africa to Yemen etc. That’s how it’s proved for me, serving in locations from Syria to Bahrain – none are the same. There’s also a huge diversity within the societies, for example Saudi Arabia has huge differences from one region to another. I’m sure that will be the same in Bahrain.

I enjoyed it and I still do. If you ask me my favourite posting, I always say “the next one” and, having just arrived, right now that means this one because of all the possibilities ahead over the next four years.

You Tweeted that you plan to: “Build on the many initiatives underway in a spirit of genuine partnership with our Bahraini friends and partners. And forge new connections between the two Kingdoms and support UK business and our community.” Are there any specific areas of cooperation you are keen to build on?

There is a relationship that gives us a foundation to build on because we already collaborate in so many different fields. The challenge is to find areas in some of those fields that we can take further. For example, energy – where we have done good work in helping with the Bapco refinery expansion. There’s still some work to be done; this field is constantly changing.

Britain is on a path towards lower carbon. Bahrain is on that journey too and there are things being developed in the UK that could help with that to help Bahrain prosper for many decades.

The same is true in education. It’s fantastic to have the links with the educational institutions such as the British University of Bahrain. I would like to see more similar collaborations. I would also like to see more investment and research, particularly in areas such as transport and smart cities.

What is the current state of trade between the two countries?
To the end of March, it was almost BD470 million in goods and services – 75-per-cent goods and 25-per-cent services. That’s growth of about nine per cent over the same period last year. There has been steady growth over the last five years. The single biggest thing was Bahraini exports to the UK in things like chemical products etc.

The challenge that I have is to do better. I have to find new areas to explore!

I have had a full grounding on the kind of issues I am likely to find here.