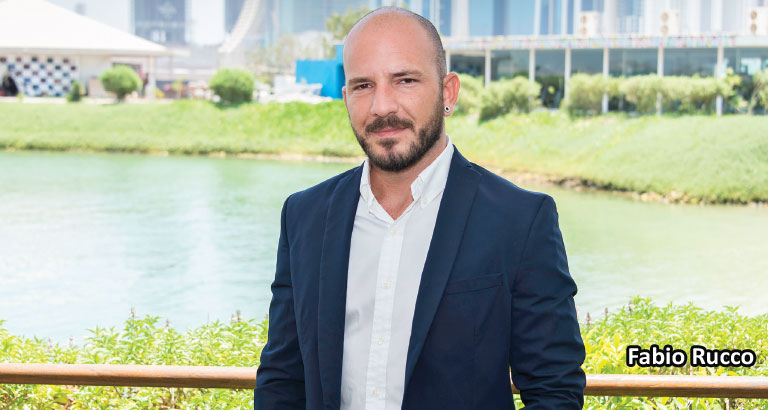 Fabio Rucco was merely 20 when he decided to leave his home in Milan in search of his first challenge. With a strong passion-fuelled sense of direction, he headed to London. His first job as a barista at the National Gallery helped him with the English language as he claims: “Without English or knowledge of computers, there is no future.”

A passionate freestyle, hip-hop and R&B dancer, he danced at the renowned Pineapple Studio in Covent Garden, London. People he met there suggested he head for the Canary Islands where, while working as a dancer and singer, he started helping to promote clubs. “I was a leader when I was young,” he explains. “I liked to decide, organise and communicate with people.”

Driven by the prospect of challenges and risks, Fabio soon experienced a kind of claustrophobia when he felt boxed into a routine. Looking to change things up, he made connections, learned the Spanish tongue and took his talent and energy to Ibiza, often referred to as the dance music capital of the world. Team leader of two entertainment companies, he excelled on the island for three seasons.

Eventually, Fabio travelled to Cuba, Miami and Mexico. With many connections formed, clubs promoted and events managed, he explains: “Soon, my name travelled to Thailand and I started work as a manager at Phuket’s biggest and best club, Illuzion, bringing in my experience from Ibiza.

“I had a clear vision of what people liked,” he explains as a way of being able to cater to everyone’s tastes.

After two more seasons back in Ibiza, Fabio was drawn away from some of the party hot spots of the world and headed to Bahrain. “I came to the island with the promise of growth, a new culture and a new challenge. At first, it was very hard for me to work in a country that is very old-school, compared to Ibiza, Miami, Mexico, London and Milan where day by day tourists are coming ready to have fun,” he says, describing a stark contrast to the fast-paced life he was used to.

After eight months, he met Coral Bay boss Madan Perattur who he claims, “has the same clear vision as I do, and he’s always active. We’d both like to do something very different.” He believes that at the moment, Coral Bay, is similar to Ibiza with its European stylistic individuality, tourists and the way it caters to said tourists.

Additionally, as business development manager, he assures us he’s got many projects planned. He says, “I believe we can make Coral Bay number one in Bahrain. I’ve got connections through whom I plan to bring in famous artists, to encourage more people into the venue to enjoy concerts and shows.” When asked how he likes his new post, his enthusiasm shows as he replies, “I can work even 20 hours because I love my job and it is my passion.”

Fabio says: “I’m only 35 but it’s like I’ve lived the life of 10 people.” His recipe for success? “Believe in what you do, love your job and work for the experience and the future. If you work for the day, there’s a big risk of failure.”