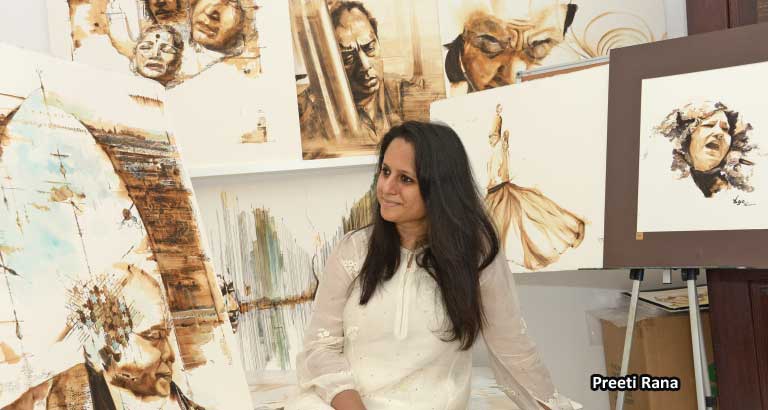 Poet and artist Preeti Rana is all set to exhibit her art in London this summer. She shares the inspiration behind her drive with Behnaz Sanjana.

Preeti Rana’s studio at her residence is not a typical artist’s enclave. No paint-splattered walls or enormous brushes lying around, and the medium the former architect uses for her current ‘music series’ of art is not too conventional either. She uses bleach on black ink to draw out beautiful golden, sepia and tan hues that give her work a striking appeal. The background of her subject is often splashed with text, remarkable detail and architecture.

“I gained confidence with the outcome of my first oil painting,” she says. “Then I looked to paint something with more movement and went with my mother’s suggestion of painting whirling dervishes.” After a number of enchanting paintings of the Turkish ascetics, her attention was captured by a classical singer in action.

Abida Parveen, a renowned Sufi singer, who Preeti often listened to, was her first attempt with black ink on canvas. As opposed to painting a portrait, Preeti says she paints music. “I’m not well versed in the technicalities of portraiture,” she adds. “I receive the experience of music from a particular moment of expression on the face of a singer. They are the channel through which I’m receiving something to convey on the canvas. It’s transcendent.”

The experience of attending the concerts of many of the ‘greats’ of Indian classical music has been the fodder for her mausiqi (music) series. “For instance, when Begum Akhtar sang, she was powerful,” she says. “Her texture of voice is unmatched. I also painted Amjad Sabri because I loved his performance, and Kishori Amonkar’s recital was transporting. Someone may paint a face better than me but I convey a moment, a personal experience.” 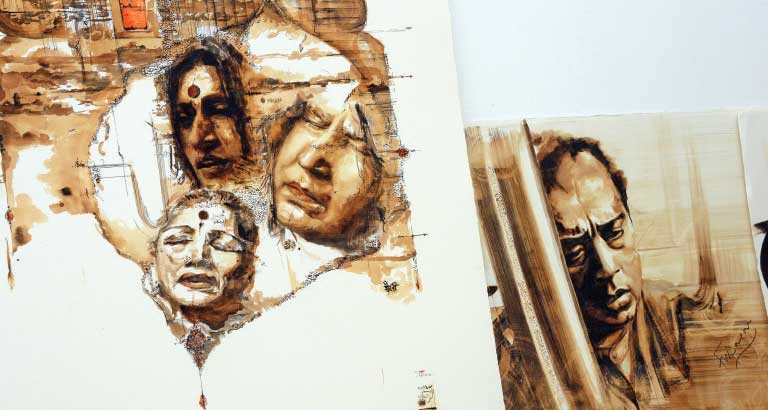 Soon after exhibiting her Whirling Dervishes series in Bahrain, she was invited to showcase in Mumbai. Besides her oil paintings, she took the first of her ink-on-canvas music series, which piqued the interest of the organisers of ‘Art Mart’ at the Khajuraho Dance Festival in Madhya Pradesh (MP), India. This was Preeti’s springboard to gain further recognition and, more importantly, validation from art connoisseurs. “My paintings made one American lady want to listen to these singers, and that made me feel accomplished,” she remembers.

Having gained greater context from the positive feedback she’d received, she pursued the series and exhibited at the Tansen festival in Gwalior, MP. Preeti further learnt about music with classical roots from Ustad Wasifuddin Dagar, the 20th generation of singers of the ‘Dhrupad’ genre in his family. She says: “When he sang a little for me, my life was changed. It was like I had just met music. Dhrupad is 500 years old – it’s not a melody, it’s divine frequency.”

Honest about not fully understanding the nuances of this kind of music, Preeti says: “But I don’t use the term ‘layman’ as a disclaimer; in fact, I hold it up as a flag. If this music could have such an effect on me, it can impact anybody. It’s world music that everyone needs to hear!”

The Nehru Centre in London, the cultural wing of the High Commission of India in the UK, has invited her for a solo exhibition, ‘The impact of Indian classical music in paintings and verse’, between August 6 and 10. She says: “I listened to the music of the singer I painted and allowed my feelings to dictate the final outcome of the painting. I plan to give my audience in London the audio track on headphones for each painting, so they can have their own unique experience. Some genres of Indian classical sounds can make the spirit take flight, while others, like Dhrupad, provide profound depth. I extend an invitation to everyone to come and see my art and share how it has moved them.”

My paintings made one American lady want to listen to these singers, and that made me feel accomplished.”