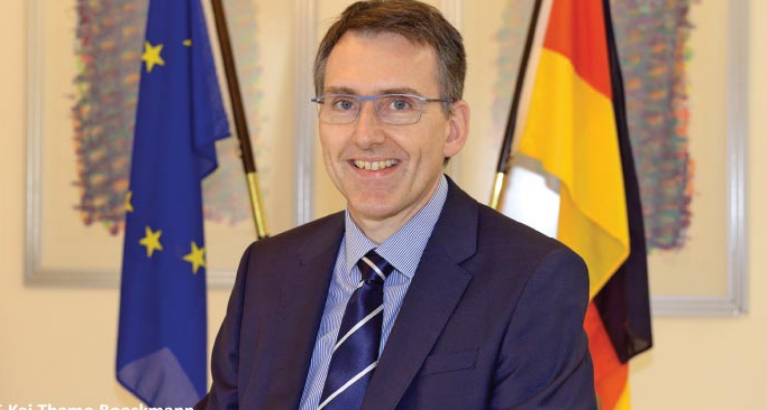 Is this your first time in the region, and in Bahrain, and how are you finding it?
Two previous postings in the region, Jericho and Cairo, have certainly helped me feel at home here, but even more the spirit of tolerance and openness I have encountered here in Bahrain.

Where were you previously posted?
In Berlin, a fascinating city which is changing constantly. I feel that this is something Berlin has in common with Manama and Bahrain.

Approximately how many Germans and German businesses are there currently in Bahrain?
About 500 Germans and 30 German companies are living and operating here. They contribute to the success of Bahrain in strategic areas like oil and gas, infrastructure, hotels and tourism and the medical field. I have started to meet them and have found a wonderfully vital and well-connected community.

Is this number growing, shrinking or static?
It has been very stable over the last few years. My impression is that there is still some potential for growth. I will do everything I can in order to strengthen the economic ties between Germany and Bahrain and to bring both sides together on all levels, whenever possible.

What are the current trade figures between the two countries?
The volume of bilateral trade between Bahrain and Germany is on the rise: BD208.9 million in 2017, compared to BD158.6 million in 2016. Bahrain is importing mainly cars and machinery from Germany, to a value of BD191.1 million. The exports from Bahrain to Germany – metals, chemical products, ceramic and glassware – are BD17.8 million. I believe there is potential for increase in both directions.

What are your plans and aims for your time in this post?
My aim is to strengthen the bilateral relationship between the Federal Republic of Germany and the Kingdom of Bahrain in all possible fields. Germany has a lot to offer – a vibrant economy, excellent university education free of charge, experience in education and vocational training – that we are ready to share. Just to give one example, I would like very much to see an increase in the number of children and adults learning German in Bahrain.

How do you plan to achieve them?
The best way is to bring together German and Bahraini institutions and companies so that they can realise joint projects, with the German Embassy acting as contact point and facilitator. Just to give one example, we are not only offering German classes as an Embassy, but also extending a partnership programme to all schools who would like to set up German classes. We also want to reach out to the friends of Germany in Bahrain and to win new friends. The recently established Instagram account of the Embassy – germanyinbahrain – offers instant information about our projects and activities.

The embassy has previously been involved in cultural initiatives to promote friendship and understanding between the countries. Is this something that will continue?
We will continue to provide for initiatives in the cultural field with partner institutions in Bahrain. Music is a wonderful language which transcends the borders of language. We have some events in the pipeline and hope to announce them soon.

Bahrain’s Investcorp seems to be pursuing a policy of German investment. Are there any further big announcements coming that you’re aware of?
Germany is very popular with investors from many different countries. I believe that investors from Bahrain are quite aware of the advantages of investing
in Germany.

What makes Germany popular with Bahraini investors?
Germany is the engine of the European economy. Investors benefit from this fact. Another plus is the large German domestic market and easy access to growth markets in the extended European Union.
From the intelligently structured educational system, which produces a supremely skilled and dedicated workforce, to the business-friendly tax policies, Germany’s business infrastructure provides much peace of mind to international investors. Germany’s workforce is highly educated and motivated, as shown by the minimal strike activity and higher education graduation figures.

There has also recently been the announcement that a German company is part of the conglomerate that has won the tender for the Tubli waste management plant expansion. What do you think makes Bahrain attractive to German companies?
Bahrain is an attractive business location in the Gulf region due to its plans for economic diversification, the opening and liberalisation of its market, the favourable investment conditions, the well-developed infrastructure and, not least, its proximity to important regional markets.

A new German visa application centre opened in Bahrain earlier this year. How is this facility beneffiting Bahraini nationals and residents?
The applicants can be served there five days a week, which substantially reduces the waiting period for an appointment. On the embassy side, we were able to shorten the processing time. As a result, visa applicants can be served better and faster.

Anything else you would like to add?
Two things: I was very impressed by the active participation of the Kingdom of Bahrain during the September opening of the 73rd General Assembly of the United Nations. At times when multilateralism is under attack, I am confident that Germany and Bahrain will work together to defend, strengthen and reform the rules-based multilateral system which has been built up over the course of the last seven decades.
On a personal level, my wife and I would like to extend heartfelt thanks to all those who so generously facilitated our first steps in Bahrain.

"My aim is to strengthen the bilateral relationship between the Federal Republic of Germany and the Kingdom of Bahrain in all possible fields.”