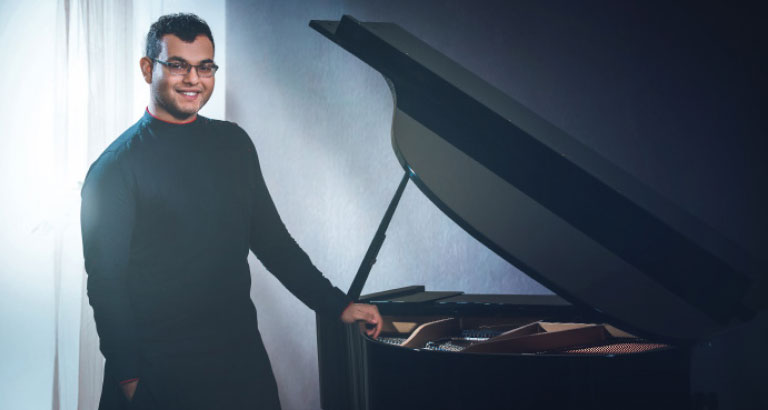 Bahrain-based pianist, Rajat Chowdhury, strikes gold at a prestigious International Music Competition. He tells Farah Baig about his journey through music and his aspirations.

He can still remember running down the school hallway with a triumphant smile. “No more karate! Piano it is!”. It’s a fun story – his escape from karate as one of the extra-curricular subjects in primary school, then taking refuge in playing the piano at just six years of age.

As we delved deeper into the world of the impressive 22-year-old pianist, Rajat Chowdhury enthusiastically states that western classical music is nearest and dearest to his heart. “It makes up the core of my musical and artistic identity. Hopefully, my music communicates everything else about me that I’m finding difficult to put into words right now!”

THE BEGINNING
His parents were skeptical as to how long his new interest would last; yet today, Rajat is one of the top gold medal winners and first-place winner in his age group at the North American Virtuoso International Music Competition. The prestigious competition has attracted talent from around the globe to compete in a variety of categories ranging from solo classical performance to ensemble performance using instruments of their choice, of which Rajat participated in the composition category.

Rajat journey in music started with him teaching himself. “I eventually started formal training here in Bahrain when I was 13. So, of the 16 years that I have been playing the piano, nine years have been under structured instruction,” he explains.

“I was placed into top music schools such as Bard Conservatory and The Berklee College of music with scholarships, but this period of self-teaching was vital to my creative and artistic freedom,” he says, adding that his mentorship and education lies in Canada but musical legacy and opportunity in the Kingdom of Bahrain.

THE LEARNING CURVE
His time in Bahrain was instrumental in his musical development. “It is here that I started taking lessons properly and it is here that I made my most important preliminary accomplishments like winning the St Christopher’s School Music festival,” he says.

“I wouldn’t be the pianist I am today without having trudged up the steps weekly to Ms. Glorina Victa’s lesson room at the Bahrain Music institute. Without her guidance and inspiration, I would be nowhere and I am sure that she is continuing her fantastic work to this day,” he says, adding that James Roriston, his piano teacher at the boarding school he attended in Bangalore, India was also a contributing factor to his growth as a musician.

Since his early days in music, Rajat has gone on to win the Con Brio National Piano competition in India at the age of 17, and was the youngest competitor. Since then, he has been performing at the prestigious NCPA (National Center for the Performing Arts) in Mumbai, India every year since 2015.  He was also invited to Vienna to perform his award-winning composition for solo piano at the Ehrbar hall.

Rajat currently studies composition and piano performance at the UBC School of music in Vancouver, Canada under Dr. Patricia Hoy and Dr. Stephen Chatman, who are internationally renowned musicians based in Canada. “I was initially in the school›s engineering program but switched into music in order to pursue my dream,” he says.

“I should be the first to say that my talent is hardly perfected. Like all crafts, it is ever-growing and improving. However, the fundamental facet of my development into the musician I am today is a foundational will to express,” he says.

AN UNDER-REPRESENTED ART FORM
With western classical competitions, the expectations are that performers will rehearse a pre-written piece and meticulously place every detail. However, Rajat contradicted this practice by entering the competition with a completely improvised piece of music: he allowed four notes to be chosen at random by a ‘note generator’ mobile app and proceeded to create an entire piano sonata on the spot using them as a theme. Piano sonatas are vast works that require a lot of planning and feature many interconnected musical themes that are almost exclusively prewritten. To craft one without preparation is a monumental task that harkens back to the improvisational abilities of old masters such as Rachmaninoff and Chopin (two composers that Rajat cites as his foremost influences). Rajat was able to create his sonata within a mere 45 minutes.

“Classical music is for everybody. The emotional profundity found within this kind of music can be as life-changing for others as it was for me” says Rajat. 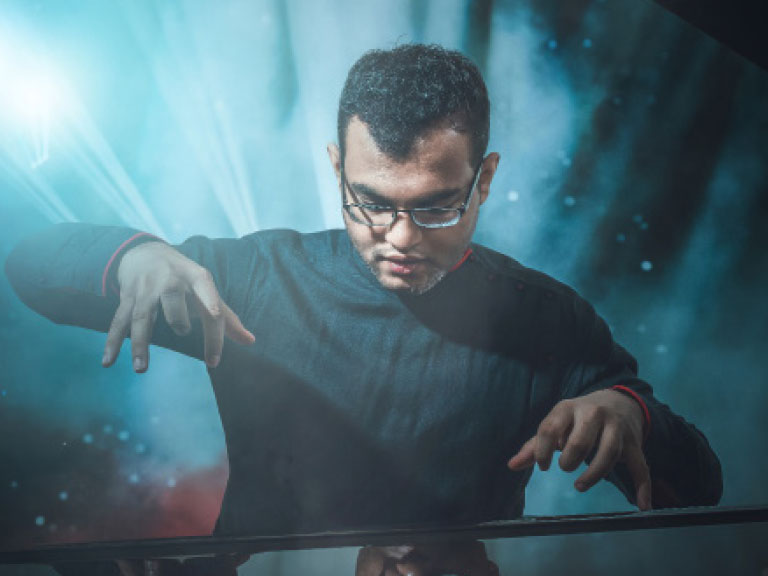 THE LANGUAGE OF MUSIC
Rajat believes that budding musicians should be able to read and interpret music in the same way they interpret text, listen and appreciate music in the same way spoken languages are approached. “One must become fluent in the language of music itself. It is a language similar to written or spoken languages and as humans we are drawn towards them out of a base desire to express what is on our minds,” he says.

“Music is the language through which we fulfil the base desire to express what is in our hearts and yet it is a desire that many of us don’t acknowledge and work towards, even amongst musicians. So, budding pianists must find the content of what they wish to say with music and approach it like a language,” he says.

THE NEXT STEP
With this win under his belt, Rajat is looking forward to expanding the scope of classical music in the Middle East. With western classical music not having as much of a foothold in this part of the world, he hopes to arrange concerts and performances for the enrichment of Middle Eastern audiences.

“My deepest aspiration is to leave behind a legacy of musical work throughout my career that can really move people for years to come, and hopefully bring classical music to a wider audience. If I know that what I have done has truly changed someone’s life, then I am more than happy,” says Rajat.

“For now, though, the immediate thing is to graduate from music school!” he rightfully says.