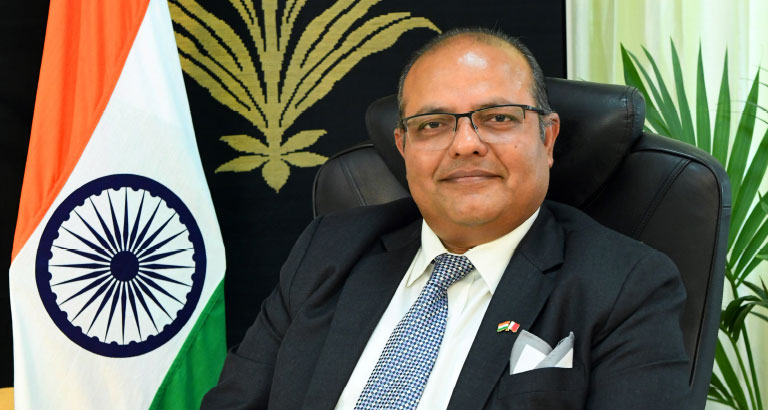 The Republic of India is celebrating its 75th year of Independence this year. On this momentous occasion, Farah Baig spoke to the Indian ambassador to the Kingdom of Bahrain, HE Piyush Srivastava, about the significant developments and milestone achievements between the two countries including the Indian cumulative foreign direct investment (FDI) in Bahrain which has reached approximately USD1.5 billion.

Your Excellency, on the occasion of the 75th year of independence of the Republic of India, what can you tell us about the country’s achievements?
This year is a milestone in the journey of independent India. We are celebrating the 75th anniversary of India’s independence with the theme ‘Azadi Ka Amrit Mahostav’. The celebrations spanning over two years were inaugurated by Hon’ble Prime Minister of India, Shri Narendra Modi on 12 March, 2021, commemorating the historic Dandi March.

India’s progress and achievements are there for all to see. A pluralistic society and the largest democracy on earth, India has made tremendous strides in socio-economic development, and in industrial, scientific and technological advances.

In almost all sectors, from agriculture, heavy engineering, infrastructure, services, health, education, to hi-tech areas of space, defence, IT, AI, big data, pharmaceuticals and medical, India is today at the top of the ladder. The Indian economy is well poised to become the growth engine of the world.

What do you consider to be some of the most significant achievements in India over recent years?
India’s growth story has been phenomenal, but I will focus on sectors relevant to contemporary times. In the post-COVID period, when economic recovery is a major focus for all governments, the Government of India’s substantial efforts have led to India becoming the fastest growing major economy in the world today. In the fiscal year 2021-22, India attracted its highest ever FDI with USD83.6 billion. This is testimony to our aggressive push for economic and infrastructure development, and our business and investor-friendly climate.

India is steadily claiming its place in the global value chain of manufacturing. It is the largest two-wheeler and 4th largest car manufacturer in the world. However, it has not left traditional sectors behind. As food security increasingly threatens global markets, India has remained the second largest food grains producer in the world.

India is also spearheading progressive movements, having built its renewable infrastructure to claim the 4th largest capacity of renewable energy; thus, playing a key role in the global community on environment and climate change matters.

In the 75 years journey of independent India, we have followed the principle of ‘Vasudaiva Kutumbakam’ i.e. ‘The world is one family’. This was evident in India’s leading role in the global fight against COVID-19. With its top class and highly competitive pharmaceutical industry, which is 3rd largest in the world by volume, and the world’s largest vaccine production capacity, India provided vaccines, medicines and other medical assistance to over 150 countries across the world.

What is the current status of the commercial and economic relationship between the two countries?
Our bilateral trade registered a growth of about 55 percent in the year 2021-22 and reached the highest ever level of USD1.65 billion. Investments on both sides are also increasing. The Indian cumulative foreign direct investment (FDI) in Bahrain has reached to approximately USD1.5 billion increasing by more than 35 percent since 2019.

Our bilateral cooperation is diversifying from traditional areas to the new emerging areas of pharmaceuticals, IT, space, Fintech and renewable energy reflecting contemporary times. The cooperation is set to intensify in the coming days as India and Bahrain find themselves in a complementary position to benefit each other. Technology, economy, IT, health, education, energy, manufacturing, skill and youth will be the key drivers.

In a recent interview with BTM, you mentioned that there were several key sectors of the Indian economy which offer good potential for Bahrain investment. Have there been any further developments on this front?
Both in health and pharmaceuticals and renewable energy sectors, the government agencies as well as private sectors of our two countries are working to increase collaboration in bilateral trade and investment, capacity building and exchange of professionals.

Given traditional reliance of Gulf countries on India in the food sector, as well as the recent focus of the government of Bahrain in ensuring food security, this sector has emerged as a key area of bilateral economic cooperation. India intends to be a partner of Bahrain in its food security efforts. We aspire to turn the traditional trading relations in this sector into a strategic one. There are significant opportunities for investment in food parks in India.

How many Indians reside in the Kingdom? Which sectors are they primarily involved in?
The Indian community numbers around 350,000, and constitutes almost a quarter of the population of Bahrain. Our vibrant community in Bahrain plays an important role in promoting our bilateral ties and further strengthening the existing goodwill between our two countries.

While a large chunk of them are employed in blue collar jobs; many are CEOs, CFOs, and professionals, including chartered accountants, doctors, engineers, teachers and nurses. In addition, a number of Indian families own and run very successful businesses in Bahrain.

What can you tell us about the impact of the CBSE curriculum and Indians employed in the education sector in Bahrain? How many Bahrainis are currently pursuing their higher education in India?
I am very happy to share that more than 24,000 students are studying in the eight Indian CBSE Schools in Bahrain. CBSE schools are among the best, and are known for their quality education in the region. These schools also demonstrate the effectiveness of Indian education system as thousands of locals and other expatriates prefer to admit their children in the CBSE schools.

In 2019, just before the pandemic, more than 100 students from Bahrain went to India to pursue their studies. The trend got temporarily disrupted during the pandemic. However, I am happy to share that recently we are seeing an increase in the issuance of education visas to Bahraini students.

What can you tell us about Indians employed in the healthcare sector in Bahrain? What are some of their most significant achievements?
Our collaboration in the healthcare sector as well as exchange of medical professionals is not new. If I recall correctly, one Indian doctor, Dr. Bhandarkar visited Bahrain as early as 1925 and opened a clinic in Muharraq.

There are approximately 8,000 Indian health professionals in Bahrain including doctors, nurses and technical staff across all government and private hospitals. There is also significant Indian investment in Bahrain’s healthcare sector. During the pandemic, Indian healthcare workers rose to the challenge, and worked shoulder-to-shoulder with their Bahraini counterparts to make Bahrain’s fight against pandemic a success.

The Indian embassy recently organised a World Yoga Day event. Can you tell us about the success of such events in raising awareness about Indian culture, and bridging the gap between communities?
The Embassy celebrated the International Day of Yoga (IDY) this year with two events on 21 June 2022 as part of the ‘Global Yoga Ring’ - the live telecast of Yoga sessions across the world. The events were a culmination of over 30 events throughout June to celebrate Yoga.

On the morning of June 21, there was a simultaneous Yoga session held at seven Indian schools in Bahrain which saw the participation of 700 students. The evening session at the Isa Sports City, in association with the Ministry of Youth and Sports and National Health Regularly Authority was attended by around 400 yoga enthusiasts including yoga practitioners, members of the diplomatic corps, representatives from Indian associations, and members of Indian and Bahraini community.  This year’s events witnessed overwhelming participation of over 4,000 people.

What are some of the most significant developments between the two countries in recent years?
During the pandemic period, the high-level interactions, bilateral visits and meetings of structural mechanisms continued. Hon’ble Prime Minister Modi held telephonic conversations with HM King Hamad bin Isa Al Khalifa as well as HRH Prince Salman bin Hamad Al Khalifa Crown Prince, Deputy Supreme Commander and Prime Minister. Both our Foreign Ministers visited each other’s countries. The Minister of State for External Affairs of India visited Bahrain, and Undersecretary for Political Affairs, MoFA visited India in March 2022.

Ministers of Oil, Youth Affairs and Sports and Education have held virtual meetings.  Several meetings of bilateral mechanisms in diverse sectors have been held. This includes the 3rd meeting of High Joint Commission led by Foreign Ministers of the two countries; 5th meeting of Foreign Office Consultations led by Undersecretary, MoFA from Bahraini side and Secretary, MEA from Indian side as well as Joint Working Groups in the areas of Health, Renewable Energy, Security and Counter Terrorism.

In addition, Bahrain joined International Solar Alliance as its 86th member in March 2022. The list is pretty long, but to sum it up, I foresee immense opportunities, potential and complementarities for greater collaboration and partnerships between our two countries.