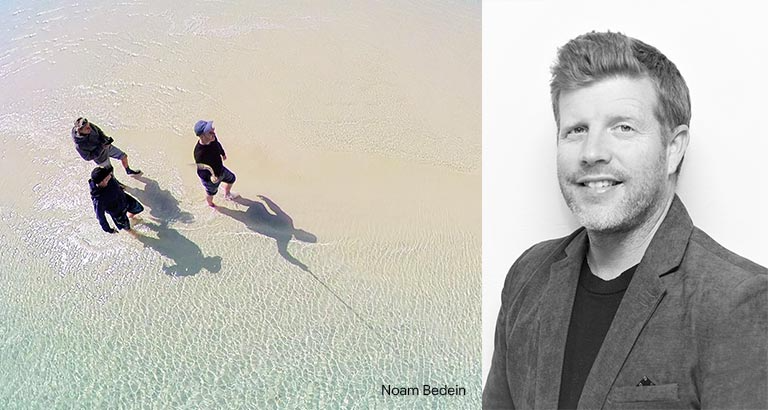 Founder and Director of The Dead Sea Revival Project, Noam Bedein, recently completed an eco-water exploration in the Kingdom of Bahrain. He recounts his journey and explains his findings.

Recently, I have returned from an eco-water exploration journey of the second Arab state in the Middle East that recently signed normalisation agreements with Israel - the Kingdom of Bahrain.

I concluded the first year of the Abraham Accords by exploring and building relations across the UAE. Thanks to the Bahrain Embassy in Tel Aviv that connected this writer to professionals and key officials in the kingdom who examine the ocean, water and environment conservation, this enabled exploration of the kingdom in an environmentally focused manner, creating an unmediated encounter with key Bahrainis.

I learned firsthand about the historical water-cultural identity, which was lost in some ways to the average Bahraini. It became immediately apparent that the challenge to save the Dead Sea could create empathy with the locals on a deeper level, referring to Bahrain›s lost water treasures and resources which are in great need of protection and rehabilitation.

In the long run, a Middle East alliance for water sustainability can have a positive impact on saving the Dead Sea, which is lacking regional cooperation.  Just go back to the Israel-Jordan-UAE energy-water deal breaker, which brought the Middle East one step closer to Saving the Dead Sea, impacting its water sources.

I arrived in Bahrain on February 14th, which happened to be the day that the Israeli Prime Minister, Naftali Bennett, made a historic visit to the King of Bahrain, HM King Hamad bin Isa Al-Khalifa, and the Crown Prince, Deputy Supreme Commander and Prime Minister, HRH Prince Salman bin Hamad Al Khalifa.

Bahrain- Between Two Seas
Throughout history, Bahrain has been called the «Land of Immortality» or «the Great Paradise››, as it was known for its freshwater springs and palm tree fields. The name of Bahrain in Arabic means ‘between two seas’. Two types of water surround the land, freshwater and saltwater.

The Kingdom of Bahrain has deep roots in the past, dating back more than 5,000 years, as it has been home to many cultures as well as a vital link between cultures, making it a commercial center and a sea crossing point between East and West, strategically located in the Arabian Gulf. Bahrain has been well known since ancient times for its pearling industry.

Bahrain’s Water Challenges Today
Today, Bahrain is among the top ten countries in the world that could suffer from a water crisis in the next 25 years. The Kingdom of Bahrain is an arid state that has been declared by the UN agencies since the 1950s to be accepted as a water-scarce region.

The Kingdom of Bahrain, despite being the smallest in the Arab Gulf Cooperation Council (GCC), contains one of the highest population densities in the world and its population is growing, while it contains the lowest freshwater resources in the world, which affects the availability of freshwater. The share of fresh water among the population of Bahrain is declining.

It was fascinating to explore Bahrain›s futuristic urban communities that address some of these challenges. Durrat Al Bahrain is the second largest artificial island in the country and the development of a marina of this project is the first of its kind and the largest in the Middle East!

The USD7 billion mega-islands project is expected to accommodate up to 60,000 residents and another 5,000 visitors daily upon completion.

Bahrain’s Ocean and Marine Conservation
Today, there are no rivers, streams flowing continuously or lakes. The country obtains groundwater from the lateral flow of the Dammam aquifer.

Accelerated economic development and population growth along with mega projects built in Bahrain in recent decades, have increased the demand for water, as groundwater is used as the only natural water resource supported by desalination facilities. More water is expected to be extracted from the reservoirs to meet the growing demands for domestic, agricultural and industrial needs that will cause an increase in salinity due to the intrusion of more saline water from the sea.

In recent decades, extensive coastal development has been carried out in the Arabian Gulf that has included excavations, restoration, shutdown projects, underwater piping facilities and extensive pollution. These are the main factors in the displacement of corals across the bay, which has had a devastating impact on the marine living environment.

In recent years a questionnaire has been distributed among students of the National University of Bahrain. 85 percent of the population involved in the study were unaware of the serious water problems and thought that since Bahrain is an island, water should not be a problem.

Although there are many challenges to Bahrain›s ocean and marine conservation, the immediate need is to create environmental-water awareness and water-sustainability education which must be supported by the Kingdom. In order to reach sustainable solutions, the mass public needs to care first and foremost.

Reef Arabia
One of the highlights of the eco-trip to Bahrain was engaging marine biologists from Reef Arabia, who are constantly developing practical reduction and compensation solutions to deal with the severe impacts on the Gulf, with the task of planning, building and deploying artificial reefs.

Reef Arabia has suggested that an artificial reef can do more than provide a utilitarian habitat for fish species. When properly designed, it blends in with the environment in a natural and aesthetic way. They combine their vast knowledge in the ecology of the Arabian Gulf with innovative methodologies for the production of concrete reefs, which integrate naturally and beautifully in the absorbing environment.

Halel Engineer, director and manager of Reef Arabia, is also one the kingdom’s main consultants and leaders of ocean and marine conservation in Bahrain.  Halel grew up with the Bahrain Ambassador to Israel, HH. Khaled Yousif al-Jalahma, who initially connected us.

Meeting with Israeli Ambassador to Bahrain Eitan Na›eh and an official meeting at the Bahrain Supreme Council for Environment, I summarised my ecological journey across Bahrain with the challenge now to promote cooperation between the countries starting with the development and branding of the Kingdom›s environmental tourism which can serve as a local outdoor educational motivator, and to take part of the regional ecotourism infrastructure to increase international delegation visits.

Such a development will drive more cooperation between Israel and Bahrain in the context of preserving the water environment and sustainability, with the hope to promote solutions for the preservation of water treasures connected to the heritage and identity of our people.

Noam Bedein is a Photojournalist, Environmental-Arts Activist and International Speaker.
He is also the Director & Founder of the NGO - The Dead Sea Revival Project.
Bedein’s work has been recognised by; CNN, National Geographic, NASA and The UAE Ministry of Climate Change and Environment.