Success on The Face of It 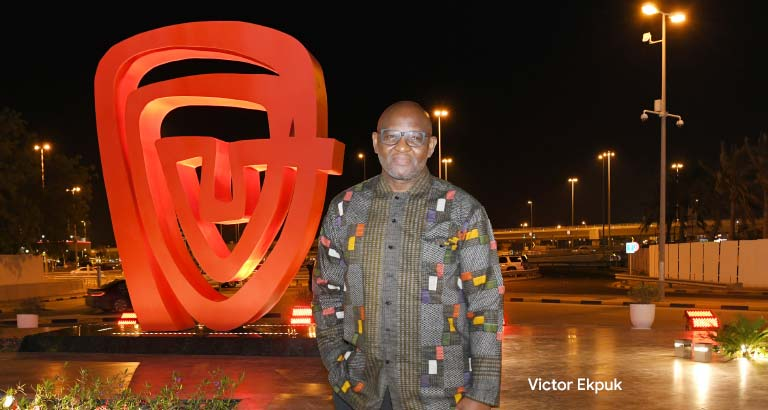 I use my work to interpret situations wherever I find myself – the idea of writing/drawing just flows through me.”

At 5.2m tall, The Face, standing front and centre at the revamped HQ of Bank ABC in the Diplomatic Area, is an imposing figure. Bright red and made of metal, it is open to interpretation with each viewer seeing something different in the construction.

So, how does the work of a Washington-based, Nigerian-American come to be representing Bahrain’s ancient culture in front of an important financial centre.

Victor explains: “The bank’s CEO, Dr Khaled Kawan, was at an exhibition of another artist in New York. Some of my work was in the same space, he saw it and asked for me to be added to the list of artists submitting ideas for this project.”

That was in July and, less than six months later, after much hard work, the finished article, a product of Victor’s imagination, was unveiled.

“The brief was very general – it was to be six to eight metres tall [slightly reduced for technical reasons], made of stone or metal and culturally relevant,” says the artist.

Victor is known worldwide having come to prominence through his paintings and drawings which are often tied in with traditional symbols and designs (types of ancient writing) he describes as forms of communication, saying: “I use my work to interpret situations wherever I find myself – the idea of writing/drawing just flows through me.”

For The Face, he took an in-depth look at local culture, heritage and traditions. “Once I started to conceptualise, I had to research the culture and the people and I realised there are layers of tradition here that build the culture,” says Victor. “What was also interesting was the Dilmun culture and the writing systems because I am interested in ways of writing to express myself.

“I asked myself ‘how do I put this all in and capture the essence of these people who have come from all these traditions?’ I looked to the hijab and the ghutrah; if you look at the work it’s about lines wrapping around the face. I chose the colour because I saw that red was a very important colour for Bahrain.”

And it’s quite an achievement for an artist, who, despite being an accomplished painter, only produced his first commissioned sculpture earlier in 2019. In fact, Victor studied fine art and started out in advertising and drawing newspaper cartoons. His first commissioned work was a portrait, undertaken to make extra money while at college, and he has never looked back – though sometimes he is surprised by his own success.

He explains: “I was very excited for the unveiling; every time I look at the piece, I’m quite impressed that I did it. You never think about success going into a project but then I stand back and look at it and think ‘Who did that?’ I can honestly say, I am surprised every time.”