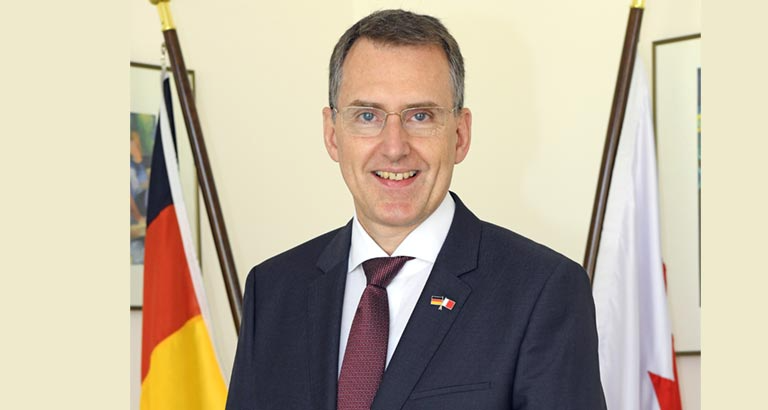 German Ambassador to the Kingdom of Bahrain, HE Kai Boeckmann, sheds a light on the diplomatic relations between the two countries in this conversation with Farah Baig.

You have been stationed in the Kingdom of Bahrain since 2018. Since the start of your assignment, what have been the greatest developments at the German embassy?
We have seen many significant developments but I would like to highlight three in particular: we are now very active on social media, have reached large audiences with our cultural events, and, significantly, the depth and intensity of our bilateral cooperation in the political field has increased remarkably.

To elaborate, since October 2018, the Embassy of Germany has started to communicate with all friends of Germany in Bahrain and with the German community via social media. Our Instagram Account @germanyinbahrain is well established now has well over 5,000 Followers. Since March 2021, people can also follow me on Twitter using the handle @germanybahrain. With the outstanding support of the Bahrain Authority for Culture and Antiquities (BACA), we have also brought many renowned artists to Bahrain. The German embassy has also helped to ensure a high-level presence of German representatives in the last three editions of the Manama Dialogue. It is not by chance that HE the Minister of Foreign Affairs, Dr. Abdullatif bin Rashid Al Zayani, has already been to Berlin twice since taking office.

I would like to mention another important development in the political field, because we profoundly believe in the added value of the European Union’s foreign policy; As local presidency of the EU from the beginning of 2020 until June 30, 2021 and thanks to VTC technology we have extended the EU coordination to all EU member states accredited to Bahrain, including over 20 ambassadors based in Kuwait, Abu Dhabi and Riyadh. We were very pleased that high-ranking guests – foremost among them HE the Minister of Foreign Affairs in the Kingdom of Bahrain - could join these extended EU-coordination meetings. This has contributed to a better understanding of Bahrain by our European partners.

Approximately how many Germans and German businesses are currently in Bahrain?
The German community in the Kingdom of Bahrain has been very stable over the years. So, we still count an approximate 500 German citizens who permanently reside in the Kingdom. Also, the thirty or so German companies actively engaged in Bahrain have shown remarkable resilience over the last couple of years.

What are the key sectors that German citizens in Bahrain are currently engaged in?
German citizens are engaged in many activities in the private sector such as industrial production, finance, water management, construction, transport, tourism and education. Their activities are as diverse as the Bahraini economy. Most work for German companies, some also in Bahraini companies and some in the neighbouring Kingdom of Saudi Arabia.

How are they adapting to the challenges presented by the current pandemic?
I have heard many positive comments from members of the German community about how much they appreciate the availability of vaccines for all residents in Bahrain. Also, the transparency regarding the numbers and the strategies adopted to combat COVID--19 offered by Bahrain’s National Medical Task Force for Combating the Coronavirus (COVID-19) is highly appreciated - this has greatly facilitated our work at the German Embassy.

What are the current trade figures between the two countries? Are there any developments in the pipeline to further strengthen trade relations?
Among the EU member states, Germany is the most important trade partner of Bahrain. German and Bahraini companies are very much aware of the benefits of trade. The trade figures continue to be on the rise, despite COVID-19 - bilateral trade in 2020 amounted to EUR624.6 million compared to EUR476.1 million in 2019. Bahrain’s imports from Germany in 2020 rose by a third to the value of EUR499.7 million while Bahraini exports to Germany reached EUR124.9 million.

Since the start of the pandemic in February last year, people all around the world have faced several challenges. How did the German embassy prepare to meet these challenges?
The last one and a half years were, for us, a time of swift adaptation to the development of the COVID-19 pandemic. We have changed how we work – home office and video conferences have enabled us to function fully even in the most difficult weeks of the pandemic. Our visa section did not close for a single day, to enable those who need to travel for urgent reasons to do so.

Video conferences have now become a regular part of our internal and external communications. We have learned a lot, most of all, how to stay connected with colleagues and partners in times of difficulties. As a result, the headquarters of the German Foreign Office and the embassies are now working closer together than ever before. Also, the regional networking has increased – not only between the EU member states accredited to Bahrain. A regular exchange with my fellow German ambassadors in the GCC countries has become routine.

What was the embassy’s policy towards continued commercial partnerships, investments and mutual growth during this period?
As German ambassador, of course I support all partnerships between German and Bahraini business representatives. Since the beginning of the pandemic I have been meeting regularly with the German business community in Bahrain once a week to listen to their assessments and concerns. We often meet with companies who are about to enter Bahrain and are there to support all partnerships and bridge builders between Germany and Bahrain. I have participated in many webinars dealing with business matters and whenever possible, we have met in person, for example facilitating meetings between the German business community in Bahrain and Bahrain Economic Development Board (EDB). Even in this period several companies have expanded their operation to include Bahrain and it has been my pleasure to receive them.

The role of cultural exchanges between Bahrain and Germany have always been high on the agenda. How are these being developed for the future?
We will strive to continue and expand our excellent partnership with Bahrain’s Authority of Culture and Antiquities led by Shaikha Mai bint Mohammed Al-Khalifa in order to bring German artists to Bahrain. We are preparing for the second edition of the Gulf German Film Festival in cooperation with Goethe Institute Gulf. In addition, we are seeing an expansion of the German Language Program – the language courses offered by the German Embassy in Manama for children, young people and adults with the support of the Goethe Institute

Are there any high-level delegations or VIP visits planned for the future? If so, how will these be managed?
I am quite confident, that in the upcoming IISS Manama Dialogue from November 19 to November 21, 2021 Germany will again be represented, like in the last three years, by high level panel speakers and delegates. The Manama Dialogue is such an important forum. Last year’s event has impressively shown how such a high-level conference can be successfully managed even in times of
COVID-19.

What are your main goals and objectives for your remaining time in Bahrain?
First of all, I strive to deepen and broaden the cooperation between the Kingdom of Bahrain and the Federal Republic of Germany in all political fields. Germany has just celebrated federal elections and is preparing for a new government to take over the helm from Chancellor Angela Merkel. Germany will remain strongly committed to the partnership with the Kingdom of Bahrain. Next year, on May 17, 2022 we will celebrate and look back on 50 years of diplomatic relations between Germany and Bahrain. Secondly, I hope to see some of the economic projects which are still in the pipeline reach concrete results on the ground. In the cultural field, I am very optimistic that soon it will be possible to bring German artists and musicians to Bahrain, so that the Bahraini public can once again enjoy a direct encounter with German culture without having to travel to Germany. Finally, we are working for further growth of our followers on social media.

How do you plan on achieving this?
As in the past, the secret of success is to closely work with trusted partners. The Bahraini government, under the directives of His Majesty King Hamad bin Isa Al Khalifa and led by His Royal Highness Prince Salman bin Hamad Al Khalifa, the Crown Prince and Prime Minister has been an outstanding partner and given tremendous support to all our activities. The Ministry of Foreign Affairs under the leadership of HE the Minister of Foreign Affairs Dr. Abdullatif bin Rashid Al Zayani has been helpful and supportive on a daily basis. The Bahraini business community has also been open-minded and welcoming, just like all our friends and partners in Bahrain’s rich social and cultural communities.