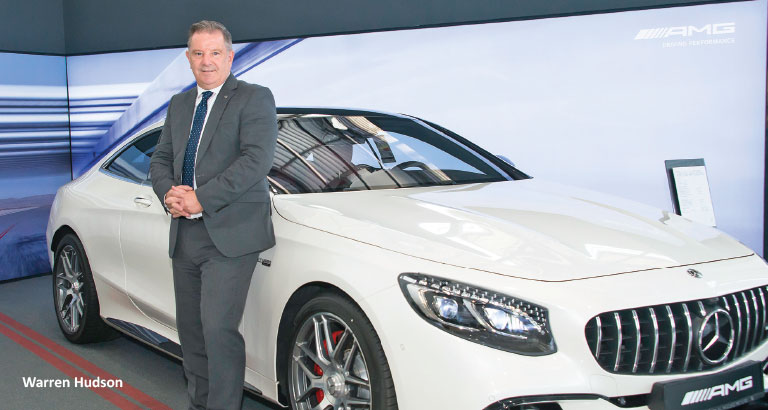 BTM caught up with recently appointed GM of Al Haddad Motors, Warren Hudson, to talk about his successful career and future plans for the company.

Warren’s passion for cars and motor racing began at an early age. Somewhat of a petrol head in his younger days, he could tell what car was coming down the road a hundred metres away. This natural interest steered him towards a career in the motoring world. “I took the opportunity to get into automotive vehicle racing as a mechanic, then joined the retail motor industry and grew from there,” he says. His first senior role was in service management, then after-sales and dealer development management, through to sales and finally to general manager and other leading roles throughout the Middle East.

No stranger to the region, Warren first moved from Britain to Bahrain in 1998, to grow what is now one of the big automotive giants on the island. “I was here from ’98 until 2005 and then went to the UAE,” he says. “But I’ve worked in Kuwait, Qatar, Saudi Arabia and have come back here now, so it’s almost two decades.” Having gained experience throughout the region, the island came calling again, and an opportunity to work for the ‘The world’s Leading Premium Car Manufacturer’ Mercedes-Benz was too good to refuse. He joined Al Haddad Motors this January.

The company is a group distributor (not just a vehicle importer) for Daimler – Mercedes-Benz, encompassing both passenger cars and commercial vehicles. His role as GM entails a complete strategic focus across all revenue streams. “Another focus is targeted quantitative measures that will realise the true potential of the market, along with developing the team and giving them enough autonomy to be able to achieve their goals and true market potential,” he says. “Also, focusing on all the commercial & financial implications that come with a business of this nature.”

With VAT expected to be introduced in the Kingdom possibly in quarter 4 2018, Warren believes it’s going to take time for the automotive market to settle down. “I think initially we are going to see a large upturn in corporate/company orientated sales business, but once things start to stabilise possibly 9-12 months, then hopefully individual/private customers confidence will grow as true retail pricing is re-established in line with VAT implications, and hence private purchases will probably come back to the market,” he explains.

Whilst understanding the Bahrain economy does realise some transient business from Saudi Arabia, Warren’s main job is to build a true market potential in Bahrain. He adds: “We’re more focused on developing the different vehicle segments that we’ve got available within the Mercedes-Benz product portfolio, I think for a premium vehicle manufacturer, it’s probably the best portfolio in the world at the moment. And, we’re the only premium manufacturer with a full range of commercial vehicles as well.”

As the region tests the water with electric cars and Mercedes-Benz prepares to reveal an all-electric SUV (the EQ range) next year, Warren’s thoughts echo the notion that electric is the future for the industry and the environment, saying: “I envisage that in the region we will start to see electric vehicles from Mercedes-Benz’s product portfolio rolling out possibly in the fourth quarter of 2019. We hope to ensure Bahrain is at the forefront of this.”

Future plans for the company will see both internal and external enhancements of its existing facilities – after-sales in Salmabad and the vehicle showroom in Tubli. It will also see many new models this year – the new G-Wagon, CLS and the AMG GT four-door. Plus, the reveal for the Facelift C Class. Warren is an ardent believer that after-sales is what builds the foundations and puts great emphasis on investment as far as staff and equipment are concerned. Warren manages a team of 152 staff and believes in rewarding good performance.

“We want Al Haddad Motors to be seen as one of the Mercedes-Benz group dealers that’s at the forefront of new ideas, staff training and rewards,” he adds. “I see my role as developing those areas and finding a team that will grow from within, ensuring continuity and strong leadership, with local Bahrainis promoted into management positions as well as acknowledging diversity management.”

Warren has come a long way from driving his first hand-me-down car, a Hillman Imp, to his current 580bhp drive, an AMG GLE 63 Coupé. And in his spare time, he swaps his four wheels to two, taking part in triathlons, connecting with his inner sportsman.