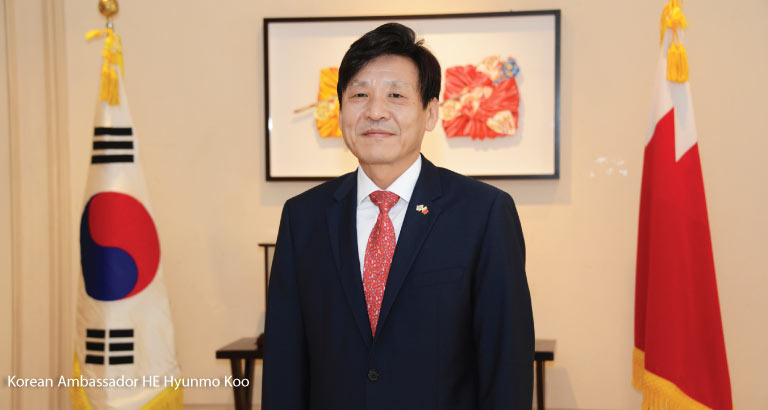 His Excellency has been in the country since April 2017 and feels at home here, saying: “The people are extremely friendly and open and even the government officials. I can feel a good atmosphere of tolerance and coexistence of the various religions.” During Ramadan he attended more than 40 majlises, adding: “It was quite an experience for me, coming to Bahrain and seeing this side of the culture.”

But he is no stranger to the Middle East having been in Tripoli, Libya, in 2011 and 2012, a traumatic time during the crisis. He explains: “We had to evacuate Korean nationals and foreign workers employed by Korean companies and we also had to evacuate the embassy for three months. We came back when the opposition forces came in and Colonel Gaddafi was killed in the October.

“For two months during 2011, I spent time with Chris Stevens, the US Ambassador who was killed. I was dispatched for talks with the opposition and he was there as deputy chief of mission. He later became ambassador. He was a very nice person and very optimistic about the future of Libya.”

Did the death of Ambassador Stevens make him consider a change of career? His Excellency replies: “It did, but I decided to carry on. I think it was one of the most difficult times I have experienced during my career. At that time NATO was bombing Libyan forces and I could hear the bombing day and night, and firing. It was scary even though I am a retired soldier, having done national service.”

So Bahrain is a much quieter posting where he says his focus is on promoting Korean products and culture – there has already been a series of cultural activities such as a B-Boy visit, and Korean food and film festivals.

He says: “We are targeting the young generation [to increase awareness of Bahrain]. Older people [in Korea] still have memories of Bahrain when it was the gateway for the whole region. The first flight from Korea to the Middle East, in 1976, came to Bahrain. But young people don’t know that we have such a long history of friendship – this is the 42nd year of diplomatic ties between the two countries and we have a number of further cultural activities planned.

“The other thing I want to do during my tenure is to expand cooperation in new areas such as defence and IT, which is a well-known Korean strength. We have nine companies with offices here, including Samsung and LG, but I would like to see more – perhaps gaming companies, which I know are in discussions with their counterparts. In October we had six Korean companies visiting to look at the new opportunities available.”

Bahrain’s Economic Development Board opened a new office in Seoul last July and had a presence at a major fintech seminar in Korea. His Excellency adds: “The EDB is setting up a fintech hub in Bahrain and I see that as something Korean companies could be involved with. We need to work with the EDB as I think Korean businesses don’t know much about Bahrain – that it has great opportunities, is cheaper than other places in the region and is a gateway to Saudi Arabia. I hope to see more support for start-ups building their businesses in Bahrain.”

The Korean community in Bahrain is around 150-strong with another 200 travelling in from Dammam. His Excellency feels there is definitely room for growth in both the number of Korean workers and the trade between the two countries.

He concludes: “We are always in talks about visits between the two nations and I hope to create a Friendship Group. I’m also expecting a high-level visit from the Korean health sector to discuss a Memorandum of Understanding, following general cooperation launched last June between our health ministries for Korea to provide an IT system aimed at reducing health wastage. There are many, many areas in which cooperation and friendship can be enhanced.”