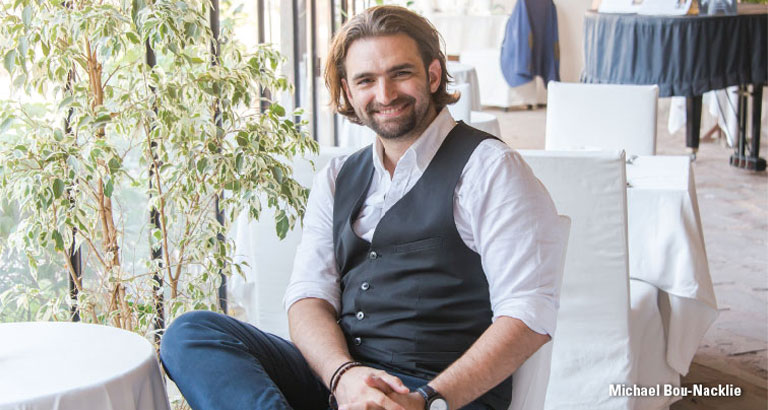 The zeal for narrating untold tales has been a common denominator throughout Swiss-Lebanese Michael’s career, from being a journalist to writer, editor, blogger, photographer and cinematographer.

“This sounds very trite but I’ve always been drawn to storytelling and that’s what got me into journalism,” says Michael. “I was particularly fascinated with Saudi Arabia – I had lived there as a kid in high school. Something about it not being accessible to the rest of the world really appealed to me from a storytelling perspective.”

Enraptured by the secluded region of Asir in Saudi Arabia, Michael wanted to depict the effect of globalisation on the nation and the toll it has taken on the history and culture of a dwindling tribal community in the southwest. “Saudi is a really young country – it’s 100 years old on paper – but because of the rapid expansion so much of the history has just been left by the wayside,” he says.

His exploration gave birth to a series of images that turned into a book and a film of the same name – Asir: Sand in an Hourglass – which will be screened on September 28 at La Fontaine Centre of Contemporary Art.

“I’m always fascinated by stories of people who don’t have a voice,” Michael explains. “The people of Asir are completely different. They’re very proud of who they are. They reject a lot of the mainstream Saudi culture because they’ve been forgotten for a long time. The tribes still live in remote areas.

The only way to get to them is through mountains and river beds, and it rains a lot in there so you can’t access the areas. “My main impetus for doing this book and film was I wanted to talk about this place because it’s so interesting. It’s a real shame that there’s this rich history that in the next 20 years could either change to the point where it’s substantially unrecognisable or it just vanishes, and I’m afraid it’s going to be the latter.”

Asir was the winner of the Hollywood International Independent Documentary Awards last year. “I also won an honourable mention from the SF Independent Film Festival,” Michael adds graciously. “To be nominated and win awards; it’s a good feeling. I don’t like my work generally but I enjoyed this film because it’s just a different story and nobody really tells it.”

His company, Fancy Hat Multimedia, also produces other films which are mostly nonfiction, including corporate documentaries. Of his ongoing projects he says: “I’m working on one now about human trafficking and another about, not so much being a refugee, but being stateless – people who’ve had their identities taken away from them for whatever reason.

“I’m just drawn to storytelling and not in a way that I want to be the next Martin Scorsese. There’s something about a well-told, true story – hearing someone tell their own story – for me that’s very interesting. My problem with a lot of discourse is that no one is listening to anyone – they’re just kind of talking at each other. The difference with documentaries like mine, I think, is it’s people sitting and saying what their life is about – you can’t argue with that.”

Michael drew inspiration in his younger days from Discovery Channel and National Geographic, so it comes as no surprise that some of his biggest heroes are renowned photographers David Alan Harvey, Ernesto Bazan and Amy Toensing.

Some of his favourite films include The Life Aquatic with Steve Zissou by Wes Anderson and Baraka, a non-narrative documentary filmed over 10 years.

Giving a word of advice to aspiring young filmmakers, he says: “Just find something you like and learn out more about it, and then try and make it something that’s universal.”

Michael loves travelling, hanging out with his dog – a Great Dane named Sheba – and enjoys being based here and the spirit of Bahrain.

With a genuine passion for giving people good stories, he’s found another one close to home – one that involves Bahraini cowboys – watch this space!