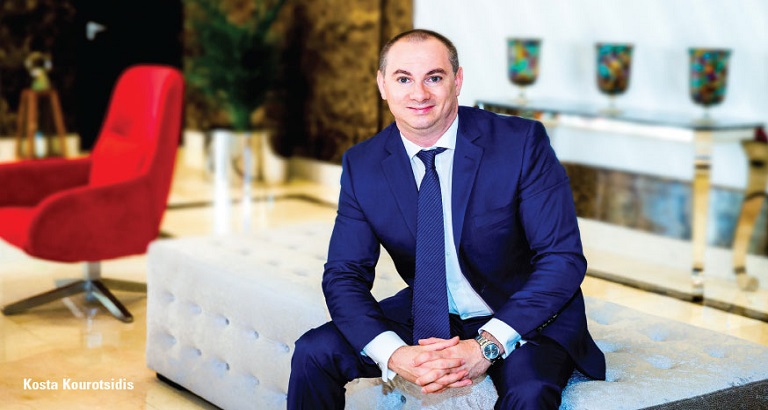 Having recently taken over the top job at The Diplomat Radisson BLU Hotel, Residence & Spa, this German-Greek national has come a long way from when he first entered the hospitality industry at 17 as a trainee.

“I moved my way forward as a waiter, then started my apprenticeship for three years, working in several departments – housekeeping, engineering, kitchen, front office and accounting – till I graduated,” says Kosta.

“I chose to specialise in food and beverage; so I started my career as a banqueting supervisor, moving onward to food and beverage manager, mainly in Europe – Germany and Ireland. Then in 2005, I wanted to gain more international experience and I came to the Middle East.”

Having worked all over the region, from Egypt to Jordan, Lebanon and Libya, Kosta was managing the Radisson BLU Hotel Downtown Dubai before coming to Bahrain. He has been with the Carlson Rezidor Hotel Group since 2000. He says his biggest motivation has been the company’s growth along with the support he has received for his personal career development, which has given him an exciting opportunity to run another Rezidor property. “I’m proud to be in such a prestigious hotel in Bahrain,” he says. “The role, firstly, will be to have a successful refurbishment of the property. The main task will be business development and, of course, repositioning the hotel with an entirely new design.”

Kosta seems ready for the job and unfazed by the competition. He believes the key to success is the right product along with service philosophy, saying: “Since The Diplomat is a landmark in Bahrain and very well known, and the majority of our employees have been here for many years, I believe this will make the difference. The asset of this hotel is the people and the service that we’ve been providing for the last 30 years. And this is the advantage we have compared to newly opened hotels.”

A major revamp is underway, with work already started on the lobby and a new outlet – a coffee shop – which promises fantastic pastries and food offerings. “The rooms are also being renovated and I think, with the new look, we’ll be able to relaunch and reposition this hotel within the luxury segment,” adds Kosta.

The all-day dining is also part of the refurbishment, with plans for a novel brunch concept where, apart from the outlet serving international cuisine, each restaurant will present its own delicacies. The lobby is scheduled to be relaunched later this year, in December; and the entire hotel will be completely ready and functional by the first quarter of next year.

Kosta feels the most challenging part of his job is to keep up the hotel’s high standards, and the most rewarding is to have positive feedback from his employees and customers.

To date, his proudest career achievement has been to revive the iconic Radisson BLU Tripoli after the revolution in 2012, and being the first international company to reopen business in Libya. It was also his first assignment!

Although Kosta was born and grew up in Germany, he is very much a Greek at heart. Expecting their first child, he is joined by his wife in Bahrain, and will have his hands full as he hopes to make this island a home for the next four years.