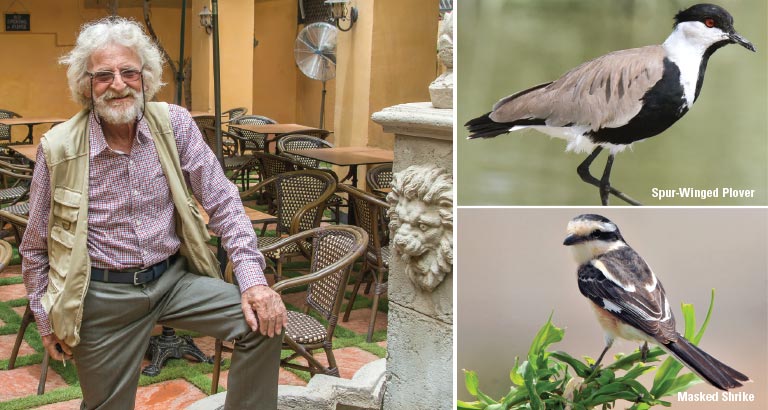 Seventy-one-year-old amateur ornithologist, Howard King, has been observing birds of Bahrain for decades. He shares his journey and passion for these feathered creatures.

An avid birder, Howard knows a thing or two about birds. But this wasn’t always the case. In his younger days, he embarked on several interesting adventures – sailing across the Atlantic at the age of 21, and travelling to the West Indies, Central America, South America and the US.

Having started his career with the Ordnance Survey, a premier mapping organisation in the UK, Howard moved to Saudi Arabia for two years before setting up his own business in Wales. In 1994, he came to Bahrain as one of 50 land surveyors for a contract with the Ministry of Housing. “I came, I saw – they liked me, I liked them,” he says. “Forty-nine went back, I stayed. And I’ve been here ever since.”

Howard’s maritime interests (he was heavily connected with the Bahrain Sailing Committee) had always made him appreciate nature, but a chance spotting of a masked shrike in his garden and a Gulf Daily News interview with a birder, Eric Hirschfeld, got him involved in ‘birding’. Since then, he has been studying Bahrain’s birds and advocating their conservation.

In 1994, a trip to the Hawar Islands gave him an opportunity that led to documenting the island’s breeding birds and wildlife. “I was asked to do some survey work there,” he explains. “During a helicopter flyby of Sawad Al-Janubiyah, the island where the socotra cormorant were breeding, I managed to take a few pictures with my tiny camera. There were 120,000 of them – a spectacular sight.”

Hawar sees a lot of breeding birds – osprey, sooty falcons and terns – which Howard studied for a year, resulting in a book, The Breeding Birds of Hawar, in 1999. “No one was really aware of the variety, sheer size and majesty of Hawar,” he says. “It’s unique and should be respected. I was able to capture a little bit of that magic.” Hawar’s conservation is clearly close to Howard’s heart and he’s wary of mass development, saying: “You can build hotels, but for what they have on Hawar, it has to be unique, as unique as the wildlife itself.”

He has also written a pocket guide Birds of Bahrain, presenting a detailed record of bird species, with the intention of raising public and environmental awareness for their protection. Howard has a web page and is active on social media. “The power is in sharing, not in withholding,” he says. “I’ve always worked on that principle and the book is just an extension of that.”

Speaking of Bahrain’s native birds, Howard says: “There are not that many endemic species. We share birds with Eastern Arabia, the Eastern Province, UAE and Qatar. There aren’t a great deal that stay and breed throughout the year.” Some of these include the graceful warbler, white-cheeked bulbul, doves, the western reef herons, terns and more, meticulously classified in his book.

There are two migratory seasons (winter and summer passage) for birds in Bahrain that vary from species to species. “The winter passage starts in August and goes through to November, with birds leaving the north going south,” adds Howard. “They can stop here or go beyond. Some go to Africa, some to India. Those same species will then come back the same way.” The places to spot them depend on their dietary needs. “If they are a wader, small coastal bird, they go to the shoreline and mudflats. Desert species will go to the desert, and so on.”

Howard believes ignorance is the biggest hindrance to conservation. On protecting the local fauna, he says: “Birds are just the tip of the iceberg. The white-cheeked bulbul is protected but still sold in the markets. The easiest thing to do is to enforce that law. Yet there is a failure due to lack of resources and budget. The greatest challenge to Bahrain is identifying what you’ve got and what you need to preserve.”

His favourite species is the bird that first piqued his interest – the masked shrike. And the rarest he’s come across is the spur-winged plover. “I think I’m the only living person in Bahrain who has ever seen one,” he says.
With hundreds of birds captured by his trusted Nikon 850, Howard humbly says he’s not a photographer, just a birder with a camera.