The Dilmun Club - Heading for a Half Century 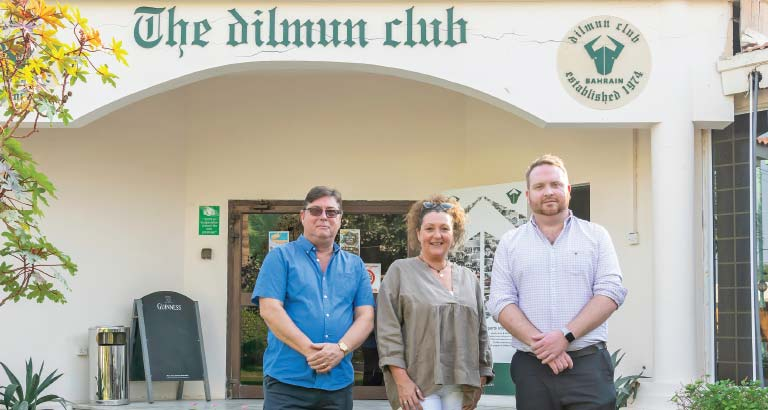 Our focus is also very heavily on major children’s events for Easter, Halloween, Christmas and other high days and holidays.”

As the Dilmun Club celebrates its 45th anniversary, Liz O’Reilly chatted to the management team about future plans and caught up with a founding member for tales of the past.

Glyn Ashley has long left these shores for Australia, but that doesn’t mean he’s not still in touch. He has some very fond memories of his time here and particularly his role, along with fellow Alba workers Alan Sterling and Adrian Westby, in setting up the island institution that went on to become the much-loved ‘Dilly’.

“The club was born in someone else’s home where a bunch of guys gathered for a game of darts and drinks,” says Glyn. “However, the wife soon put a stop to the weekly Thursday soirées. This resulted [following a brief sojourn in an unsuitable villa] in us finding a venue close by, belonging to Mr Zayani.

“He wanted the equivalent of BD10,000 a year [rent] but the members weren’t prepared to sign up for this amount and the majority of the committee resigned; just  two or three of us were left.

“Were it not for Alan Sterling’s courage to sign the new lease, the club would not have progressed – but once that was completed the situation snowballed and we received tremendous support from the expat community.

“Money poured in and was used for facilities such as squash and tennis courts, stables and a cricket pitch. In those days it was possible to chat with the ruler, who kindly donated a couple of horses from his beach complex for our new stable!”

That stable, today, houses some 40 horses – half of them owned by the club and half kept at livery. In fact, the Pony Club is one of the most popular activities on offer and the whole venture is a real bonus for the island’s horsey community.

The club went on to welcome generations of expats and Bahrainis and these days membership is up to about 800. Chairman, Norman Watson, General Manager, Stephen Chartres, and Club Secretary, Clare Bury, are keen to point out that it’s the family atmosphere that makes the place so popular.

“Over the years we’ve had some big nights of entertainment here, such as performances by Peter Kay, Human League and Toploader,” says Stephen. “Now, we’ve revived the Dilstock Festival, which was really popular around 12 or 13 years ago. That’s coming up this month and then we are also doing Bahrain Rocks working with local artists – which went down really well when we staged it for the first time last year.”

“We do a lot in supporting the local community,” adds Clare, outlining the club’s work with the King’s orphans charity as well as Feed the Need and animal welfare organisations.

“Our focus is also very heavily on major children’s events for Easter, Halloween, Christmas and other high days and holidays,” she says.

In fact, the club hosts the Kingdom’s only Rainbows, Brownies and Guides groups, which attract attendants from across the island.

As the anniversary year draws to a close, the major celebration will be a brunch on November 22, priced at just BD4.500 inclusive – not surprisingly, prior booking and payment is required!

And Norma says there are big plans for the future with a refurbishment for the Candles restaurant on the cards and the inauguration of a full-size sports pitch planned for early 2020, which will allow the club to form its own teams to take on local competition.

“We’re very excited about the future,” he says. “It’s great to carry on the legacy of the hard work so many people have put in over the years.”