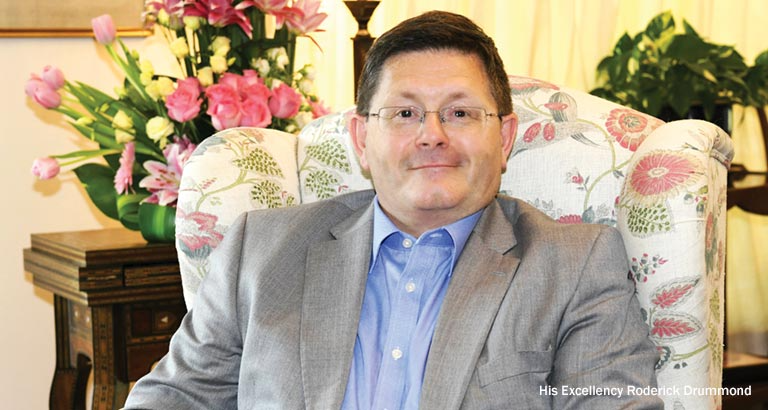 As part of our ‘UK in Bahrain’ supplement, Kristian Harrison spoke to the British Ambassador to Bahrain, His Excellency Roderick Drummond, about his time in the Kingdom so far and his plans for the coming year.

In April of this year, you will have been in Bahrain for two years. As Ambassador, what do you consider to be your primary focus during the remainder of your assignment in Bahrain?

I think the main goal is to enlarge our countries’ collaborations in trade, investment, education, science and technology. These are all areas that we already co-operate in, but we can do a lot more. During the pandemic, we’ve found ways to take this to a higher level such as offering educational programmes such as Masters and PhDs rather than just Undergraduate degrees.

What do you consider to have been your most significant achievements in the past two years?
I’ve been really impressed with the way that Bahrain has taken advantage of educational and investment opportunities with the UK. From the other side, many UK firms have found a strong base in Bahrain and expanded into areas such as renewable energy, waste energy and green industries. The Embassy teams have helped promote such work as we all have a duty towards combating climate change.

I can see our work has had lasting achievements in the Kingdom and tangible benefits have shown themselves over the past two years after many years in gestation.

You joined the UK’s Diplomatic Service in 1985. Since then, you have had extensive experience with postings in the Middle East and North Africa region. Can you tell us a little about those?

I’ve spent half of my career in the Middle East and Arab world. I learnt Arabic after joining the Foreign Office and I’ve served in Algeria, Jordan, Syria, Qatar, Saudi Arabia and Bahrain. I’ve also been in Fiji and Brussels, so I’ve had a varied career! My work depends on what the focuses and targets of the British government are at the time.

Are there any unique skills that you have had to call upon or develop during your tenure in Bahrain?
What strikes me about the region, which I noticed in Saudi Arabia and even Bahrain, is that despite how the general culture is the same and people wear the same clothes, there are huge differences in how they speak, their customs, what they eat and more.

To succeed in this job, you need to learn about these cultures and embed yourself in them. I would urge all upcoming diplomats to keep their ear close to the ground and really immerse themselves in the post. I want to get the best out of our junior colleagues, so when I conduct talks I do emphasise this as a very important facet of the career.

I would say getting the best out of many fields is the toughest challenge in the job. So it’s not just trade, investment, transport and such, but all of these combined and more. Of course, with COVID-19, this has made it tougher as we’ve had to conduct meetings online and that naturally means it’s harder to build personal relationships.

Despite that, it has reinforced how important it is to have an Embassy in the country to liaise with and build bonds. It would be impossible to do this from London, it would be like cold-calling and progress would be very slow.

The Kingdom of Bahrain and the UK have a rich history of trade relations spanning several decades. How do you see the current status of the commercial relationship between the two countries?
Relations are really good. We had five years of growth with £1.5 billion worth of trade and this was growing 10 per cent year on year. However, with the pandemic this has obviously taken a hit but as Bahrain comes out of COVID, there is huge potential for it to grow and surpass even what it was before.

Recently, talks on commercial and investment cooperation between the United Kingdom and Bahrain took place. What can you tell our readers about this?
We’re talking intensively with Bahrain and other GCC countries in a process called the Joint Trade Investment Review, which analyses in detail what the issues restricting trade and investment are. It’s an important phase to discuss which areas need to be covered by official agreements and where problems lie. A UK-GCC arrangement and agreement will obviously be preferable and that’s something we’re working towards.

Since COVID, we’ve also facilitated some expert discussions between academics and clinicians. These have helped shape our ideas for the future and I think we’d be in a far better position to tackle a pandemic.

How many UK citizens are currently residing in the Kingdom? Which key sectors are they engaged in?We have 5,000 British citizens who are permanent residents in Bahrain, with approximately another 1,000 who come in and out of the country either in the ports as part of the Royal Navy or across the Causeway who work in Saudi.

We still have many working in the oil and gas industry, but we’ve seen a large influx into the educational and academic sectors. I think it’s great to see British citizens working in a wide range of fields and supporting the local community here.

How have they adapted to the challenges presented by the current pandemic crisis? How has the embassy supported its citizens during this time?
We’ve done a lot of messaging, using social media such as Twitter, Instagram and Facebook to listen to people and hear their problems. We’ve kept people up to date with travel advice, new Bahraini regulations and signposting them towards changes to work permits and visas.

We’ve not had too many problems in terms of people being stranded here as the air link to London has always been open. It’s always been the most important air route in the country as it’s not just a gateway to Europe but North America too.

We were also in a position to help facilitate flights from India where people were stranded, with Bahrain Airport helping as a stop-off country to refuel and re-crew the planes and get our citizens home.

The Embassy is always in discussion with the UK government about the latest travel advice and we see the final drafts before it goes out, so we’re always ready and on the ball without messaging which we put out on social media.

A high-level UK delegation visited last month. Are there any other planned VIP visits likely this year? If so, how will these be managed in the COVID-19 era?
Earlier this year, we welcomed the International Minister for Trade Ranil Jayawardena, who was here looking at investment opportunities, and then very recently we had James Cleverly, Minister of State for Middle East and North Africa, here for a joint working group with the Bahraini Government about future collaboration.

We are hoping to have further visits in the economic sphere in the coming months and we are looking ahead to a potential UK-GCC summit later in the year which will involve the Prime Ministers from all involved parties. Of course, this depends on travel restrictions in and out of the country at the time but we are confident that towards the second half of the year we will be fine on that front.