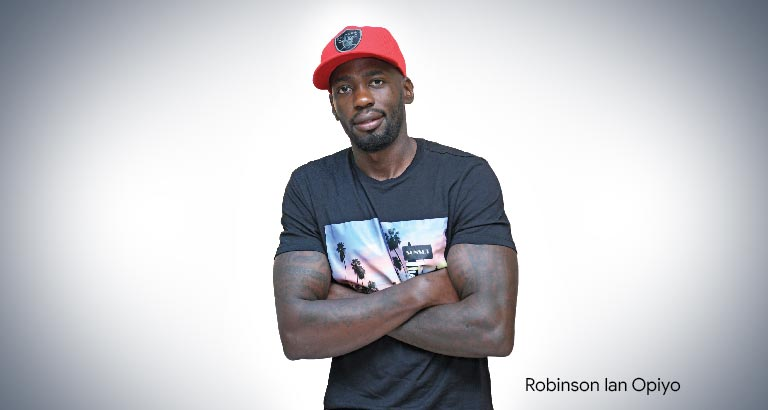 Music has always been my passion, ever since I was a little kid. Rap, dancehall, R&B, hip-hop – I love it all.

Looking on as Robinson goes about his personal training job or lifts weights at Juffair Fitness Centre, you could be forgiven for thinking ‘this is a man who has always been fit and was probably working the weights bench from the age of two’. But you’d be wrong. In fact, the trim, taut Kenyan only took up fitness around five years ago. He’s come a long way since then!

“I first got into fitness because I was a skinny kid,” he says. “People used to bully and torment me about my size, it was horrible. I always wanted to get into the gym but, in Nairobi, it was expensive.”

However, a move to Qatar, where he worked as a photographer, offered a solution. His apartment had that all-important fitness equipment and Robinson lost no time in taking advantage. He fell in love with working out and went on to complete the International Fitness Alliance Level Two and Three in personal training and fitness training.

Fast forward a few years and nine months ago, seeking a new challenge, he jumped at the chance to come to Bahrain where he joined Juffair Fitness and is currently training athletes for basketball, volley ball and the like as well as putting members through their paces in advance of the Bahrain’s Strongest Man competition, which is coming up next February.

He says: “It’s my ambition to be Bahrain’s best trainer – I want to be as good as my boss, Ehsan. And I’m not just about weights, though that’s a big part of it, but I also do look at meal programmes, diet plans, training techniques and more.

“The best thing is when people start to see results; for example, when they can see several kilos come off in a month – they’re happy and I’m happy.”

Always a music lover, Robinson now has another string to his bow with a secondary career in rap music. He explains: “Music has always been my passion, ever since I was a little kid. Rap, dancehall, R&B, hip-hop – I love it all. The love comes from my family and my background, both my mother and my brother sing, though church music, not professionally.

Robinson is working with MK Studios with producer Mohammed and his wife Najma, who also performs, as well as Arab rapper Ibrahim and English rapper Jay. Robinson himself performs in his native Swahili. He says: “We’re producing various types of music, Afrobeat, dancehall, that kind of thing, in three different languages – we want to give the message that music is for everyone to enjoy across all languages.

“For me, it’s about bringing people together and uniting them. We talk about different topics and the songs are personal. For example, I’ve written an R&B love song, called Like A Dream, which is about meeting a lady in a way you’ve never dreamed.”

And, asked when we will get to hear his creations, he replies: “Now I’m in the process of building my brand, working with other people, and I hope to be ready to release my music publicly by the end of the year.”

The skinny kid from Nairobi has come a long, long way!
Find out more @riodee (music) or @Rio_fitness1